PITTSBURGH — Senator Bernie Sanders was in a rush.

He arrived late to a rally in Michigan after racing across the state recently. He took four questions at a town hall in Ohio before dashing off again.

“Tell me what’s on your mind,” he urged the audience during an event in Detroit. “Don’t be shy — we don’t have an enormous amount of time.”

Two months into his second presidential bid, Mr. Sanders is atop the field of announced Democratic candidates, buoyed by his enviable name recognition, a huge pool of small donors and enduring appeal as a political outsider. He has been asserting his status as a front-runner on the campaign trail, mostly holding big rallies that double as shows of force, with the kinds of enthusiastic crowds that helped him win primaries against Hillary Clinton in 2016.

But as he swept through a string of Rust Belt towns over four days this month, there was some reason to hurry: the looming candidacy of Joseph R. Biden Jr.

Mr. Sanders has been running second to the former vice president in most early polls, but as the only one in the race, he has enjoyed significant attention from voters, local party officials and the news media. With Mr. Biden expected to declare his candidacy soon, Mr. Sanders now faces the prospect of greater competition for the spotlight.

So far, Mr. Sanders doesn’t show signs of being psyched out by his rivals, unlike Republican candidates who were rattled by Donald J. Trump in the last election or politicians in both parties who are given to second-guessing. At a CNN town hall forum on Monday night, he took a firm stand supporting voting rights for people now in jail — even “terrible people” like the Boston Marathon bomber and people accused of sexual assault. When the moderator gave him a chance to backtrack, Mr. Sanders did not show any self-doubt.

Whether as an insurgent presidential candidate in 2016 or a front-runner now, Mr. Sanders believes he is battling against establishment forces and traditional thinking, and his advisers say he is running his own race. 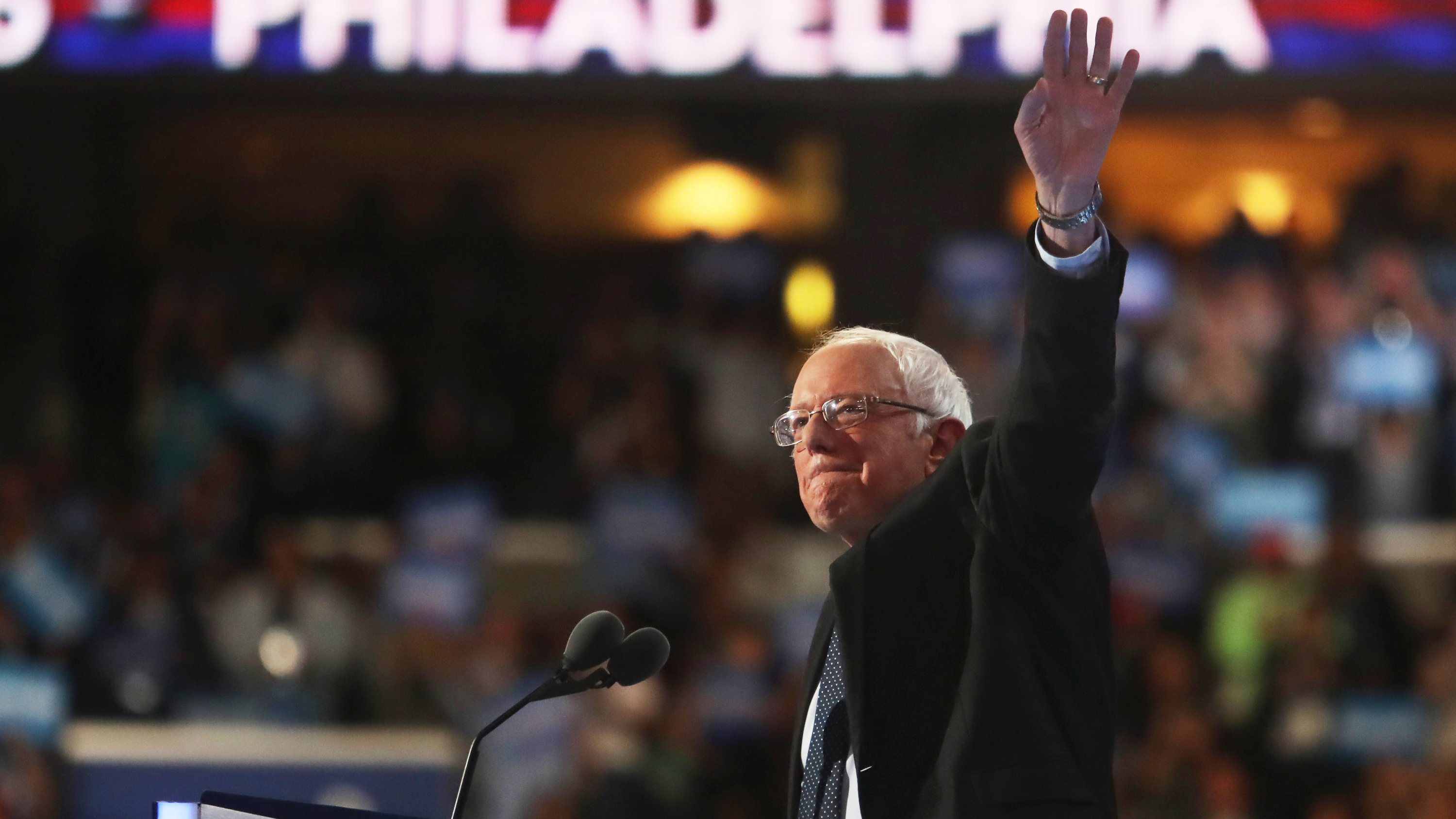 [Make sense of the people, issues and ideas shaping American politics with our newsletter.]

“Bernie Sanders is out there making an appeal for his message and his policy ideas,” Faiz Shakir, Mr. Sanders’s campaign manager, said. “And they’re going to be the same regardless of whether it’s Joe Biden, Hillary Clinton or Barack Obama running against him.”

“It is not contingent upon the people in the race,” he said.

That kind of thinking could allow Mr. Sanders, of Vermont, to operate above the campaign fray and outside of the political gossip he hates. It also risks making him at times appear out of touch with the realities of the race: Mr. Sanders has steamrollered through successes and setbacks alike in single-minded pursuit. His ideological message has not deviated. He does not mention other candidates or allude to them. Even his irascible demeanor is unchanged.

Mr. Sanders’s campaign says he is taking his status as a leading candidate seriously, and is participating in decision-making behind the scenes — how to allocate money, where to travel, what message to emphasize and when. During campaign swings, he is making an effort to meet with local officials and union leaders. He has at times even talked about himself, something that he resisted in 2016 but that his advisers have urged him to do.

“I grew up in a family that lived paycheck to paycheck,” he said at a rally here in Pittsburgh, “and I know what that is about.” It was a start.

Yet being at the top brings all kinds of perils, and candidates who start out as the highest-profile, best-funded contenders in the race have a mixed record.

Mrs. Clinton was a globally famous fund-raising powerhouse when she entered the presidential race in 2007, but Mr. Obama overtook her with an insurgent campaign that united wary voters. The same year, Rudolph W. Giuliani, the former New York City mayor, saw an early polling lead in the Republican primary disintegrate after conservative voters discovered that behind his image as the hero after the Sept. 11 attacks was an eclectic political record that included liberal views on abortion and guns.

Recent political history is also littered with examples of candidates who failed to expand their support beyond a strong following at the outset, including Jeb Bush, whose early financial advantage in the 2016 Republican primary concealed the thinness of his support from voters.

Still, with many Democrats indicating that electoral strength in November 2020 is as important as anything else, Mr. Sanders’s advisers are aware that his success could be predicated on whether voters believe not only in his ideology but also in his ability to get across the finish line. 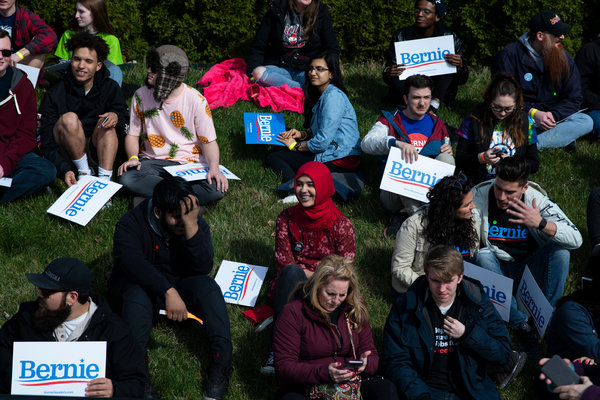 And so, with Mr. Biden’s footsteps getting louder, Mr. Sanders has been sprinting of late. Last weekend, he stormed though Wisconsin, Indiana, Michigan, Ohio and Pennsylvania, closing with a town hall on Fox News in Bethlehem, Pa.

Ahead of a return visit to South Carolina last week, he announced a slate of endorsements from elected officials and faith and labor leaders, a move his campaign hoped would demonstrate strength in a state where Mr. Biden holds a big lead in early polling.

Perhaps most notably, Mr. Sanders has sharpened his attacks against President Trump, repeatedly portraying him as a devious liar and arguing that the president had failed to deliver on the campaign promises — on health care, on taxes, on trade — that had won him so many votes.

“When we think about somebody setting an example for the children of this country, we don’t want somebody who lies all of the time,” he said at a rally in Warren, Mich., a working-class town not far from Detroit. “The very biggest lie that he told here in Michigan and in Vermont and all over this country was that he was going to stand with the working class of our country — that he was on their side.”

“It will not shock you to learn that he lied,” Mr. Sanders said of Mr. Trump, at the rally in Pittsburgh. “I know that that’s a shock, but he did.”

[Read more: The blowup between the Center for American Progress and Mr. Sanders’s campaign reflects ideological divisions among Democrats.]

At several stops, he also offered direct appeals to working-class voters, vowing to defend them against what he characterized as the whims of money-grabbing corporations.

In Ohio, he excoriated General Motors for closing its nearby Lordstown plant. “We are sick and tired,” he said, his voice filling the high school auditorium, “of you shutting down plants in this country and destroying families.” Those in the crowd raised their fists and applauded thunderously.

But even as a leading presidential candidate, Mr. Sanders is in many ways the same as he was as an underdog in 2016. He rarely smiles, even when he is being praised. He interrupts pointed questions from voters, then answers them with recognizable snippets from his stump speech. He does not linger at campaign stops.

Some people attending Mr. Sanders’s events appeared to yearn for a connection they did not get.

In Detroit, a crowd of mostly black voters packed into Sweet Potato Sensations, a bakery in the northwestern part of the city, for a brief question-and-answer session with Mr. Sanders, who had faced criticism in 2016 for failing to draw initial support from African-Americans.

“Is the baby in child care?” he asked a woman holding a young child in the front, trying to land a point.

In answer to a question on immigration, he seemed to miss the mark, too.

“I wanted to hear him say that Trump is using that hate to create something that is going to really infringe on peoples’ rights as Americans,” said David Sanchez, 36, who had posed the inquiry. “I heard, like, a canned answer, and that was pretty unfortunate actually.”

But many voters said it was that very consistency that endears Mr. Sanders to them.

Michael Bodner, 57, a postal worker from St. Clair Shores, Mich., said he believed that Mr. Sanders could win the nomination — and the general election — because of his reliable message and clear point of view.

“Bernie,” he said, as the wind picked up, “he’s always been this way.”

And it seemed unlikely at this point that Mr. Sanders would change.

Sitting onstage later in Ohio, Mr. Sanders scribbled notes. He sighed and chewed his lip. As familiar chants of “Bernie! Bernie!” rang out, he looked less than eager to soak any of it in.