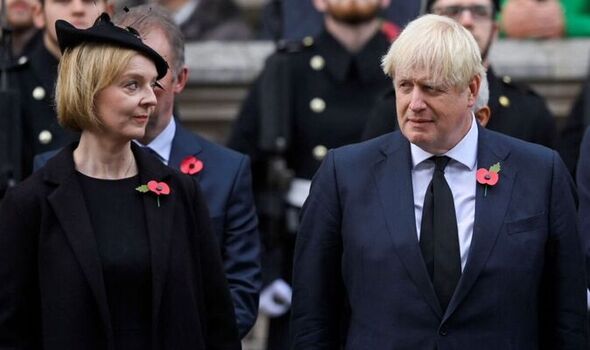 The former Prime Ministers want an end to a ban on new onshore wind farms and are trying to force a change to their successor’s proposed new planning laws.

The challenge comes as it emerged that Ms Truss planned to make Mr Johnson her foreign secretary.

The plan to allow Mr Johnson to return to Cabinet to deal with the invasion of Ukraine.

But both sides agreed the idea would be too complicated in the end.

The former PMs have now both signed an amendment to the government’s Levelling Up and Regeneration Bill.

The legislation was derailed earlier this week after a separate revolt over house building targets.

Nearly 20 Tories have signed the wind farms amendment tabled by Simon Clarke, who was Levelling-Up Secretary under Ms Truss.

Ms Truss said she wanted to end the ban when she was PM, because she believes the energy crisis means Britain needs boost its  own supplies.

Mr Clarke said that MPs across the Conservative Party “are getting behind this amendment because it’s pro-growth and pro-green — in a time when we ought to stand for both”.