Kim Davis, the Kentucky county clerk who defied the Supreme Court and was jailed in 2015 for her refusal to issue marriage licenses to same-sex couples, lost her re-election bid on Tuesday.

Ms. Davis, who emerged as a hero of the religious right and ran for re-election as a Republican, lost by fewer than 700 votes among nearly 7,800 cast.

Her Democratic opponent, Elwood Caudill Jr., bested her in the race for clerk of Rowan County, a rural patch of eastern Kentucky that voted for President Trump in 2016 but where Democrats typically win local office.

The race had once been billed as one of the biggest political showdowns in Kentucky because David Ermold, a gay man whose request for a marriage license Ms. Davis denied, announced he would run for her job. But then Mr. Ermold lost the Democratic primary to Mr. Caudill, chief deputy in the county property valuation office.

Mr. Caudill was a familiar local figure who represented a far less politically charged choice for a job that is mainly administrative.

Ms. Davis has held the office since January 2015, when she succeeded her mother, who had been the county clerk for 37 years. She ran as a Democrat, but quickly found herself steeped in conservative politics. 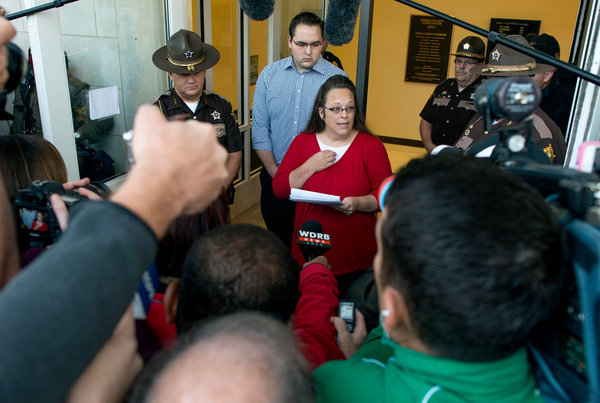 [Make sense of the country’s political landscape with our newsletter.]

A testy exchange with Mr. Ermold and his partner, David Moore, was caught on camera. Ms. Davis turned them away, saying that she would not issue any marriage licenses.

“Under whose authority?” Mr. Ermold asked.

She spent five nights in jail for defying the federal order and later switched parties.

Since the summer of 2015, she has appeared in statewide Republican campaign ads, met the pope, campaigned against same-sex marriage in Romania, attended a State of the Union address and published a book: “Under God’s Authority: The Kim Davis Story.”

Ms. Davis could not be reached for comment Tuesday night.

In a statement, Mr. Caudill did not address the controversy of his opponent but thanked his supporters for their hard work.

Mr. Ermold, for his part, had said that he would not support either candidate. But he tweeted on Tuesday that he had voted.

His vote was a write-in: “Against Homophobia.”