Irish leader Leo Varadkar said there was “no dressing it up” that it was a “bad day” for his Fine Gael party after its second-worst defeat in election history. In an email sent to party members on Thursday night, Mr Varadkar admitted the results were “disappointing”.

He conceded that his party had lost more votes and seats than he hoped for after Fine Gael party came third in the popular vote.

Mr Varadkar said: “We lost seats and votes. Less than we feared a week ago, perhaps. But more than we hoped when we saw the exit poll on Saturday night.

“I know, only a few short months ago we had expected to make gains. 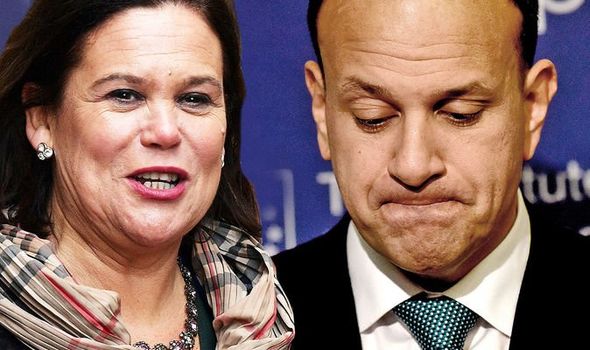 “There is no dressing it up. It was a bad day for Fine Gael.

“We have lost colleagues who did not deserve to lose their seats.

“New candidates for years deserved to poll much better, but had to battle against the tide.”

But despite the election results, which saw, Mr Varadkar said his party “remains relevant,” adding: “Our mandate counts whether it’s as the lead party of the opposition or as part of a future government”.

However Mr Varadkar’s Fine Gael was the big loser, recording the second-worst result in its history, winning only 35 seats having entered the campaign as the largest party on 47.

Despite a booming economy, the party was punished by voters for its failure to deal with the country’s housing crisis, caused by soaring rental prices and a lack of affordable housing.

The departing Irish leader this week admitted that Sinn Fein deserved the chance to lead the next parliament, having won the highest percentage of first-preference votes.

But showing no signs of wanting to step aside as party leader, despite calls for his resignation, he said he was ready to take on the “challenge of continuing to lead the party I love in the interests of the country I love”.

Fine Gael got just under 20.9 percent of the vote – its worst ever election result – trailing behind rivals Fianna Fail and Sinn Fein.

Mr Varadkar added: “We now have a very different political landscape. It is not easily comparable to the past.

“There are three major parties with roughly the same number of votes and seats. No two can form a government without support from a third party or parties.

“And, given how volatile politics is, it can all change again, and quickly, and in our favour.

“In the fullness of time, history will judge the last government more kindly than the electorate has.”

Sinn Fein leader Mary Lou McDonald has wasted no time in getting down to business, reaching out to several potential coalition partners in an effort