Brexit: George Galloway tells EU to 'mind their own business'

The Cabinet Office minister will go head-to-head with Commission vice-president Maros Sefcovic to manage our future relationship with the bloc. The pair are already co-chairs of the Brexit Joint Committee, tasked with implementing the UK’s Withdrawal Agreement. A UK Government spokeswoman said: “We’ve informed the European Union that the Chancellor of the Duchy of Lancaster will co-chair the Partnership Council for the United Kingdom on an interim basis.

“This is in addition to his existing responsibilities as co-chair to the Joint Committee.”

Mr Gove and his Brussels counterpart have been at the centre of the row over the Northern Ireland border tensions.

Last week the men held crisis talks amid growing anger over the post-Brexit border plans for the region. 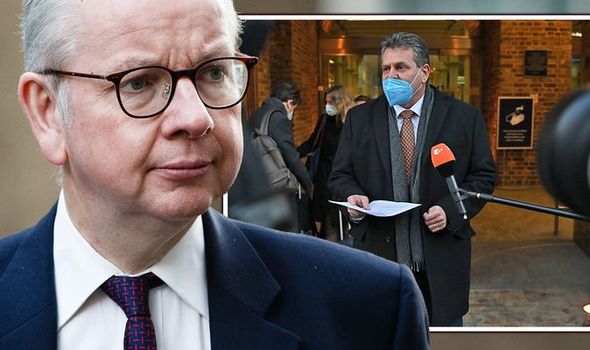 Brussels announced plans to impose a hard border on Ireland to prevent coronavirus vaccines leaking into the UK via the backdoor.

Their work on the Partnership Council will focus on ensuring the UK-EU Trade and Cooperation Agreement runs smoothly.

The body will be the first port of call if disputes arise as part of the post-Brexit future relationship with the bloc.