Dana Nessel, the state’s attorney general, cited evidence that her likely Republican rival, Matthew DePerno, had been part of a “conspiracy” to gain improper access to voting machines. 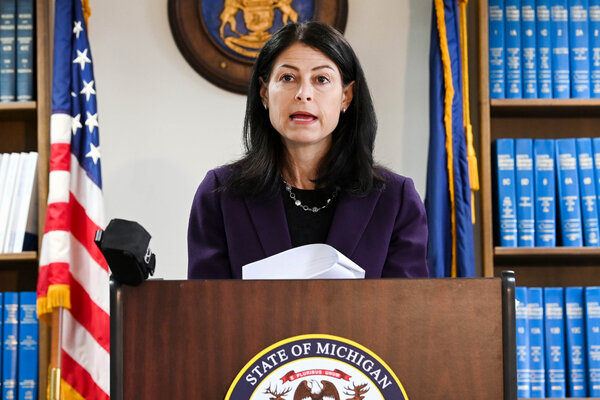 By Nick Corasaniti and Alan Feuer

The attorney general of Michigan, Dana Nessel, is seeking the appointment of a special prosecutor to review potential criminal charges against Matthew DePerno, her presumptive Republican rival for the post, pointing to evidence that he was part of a “conspiracy” to gain improper access to voting machines used in the 2020 election.

The allegations against Mr. DePerno and eight other people — including Daire Rendon, a Republican state representative, and Dar Leaf, the sheriff of Barry County — were detailed in a letter sent on Friday from the deputy attorney general to Jocelyn Benson, the Michigan secretary of state, and a petition requesting the special prosecutor. The Detroit News first reported the letter, and Politico first reported the petition.

According to the office of Ms. Nessel, a Democrat, Mr. DePerno and others persuaded local clerks in three counties to hand over election equipment and then took the machines to hotels and Airbnb rentals to perform “tests” on them. They returned the equipment, now damaged or improperly tampered with, in parking lots and shopping malls, the documents say.

Michigan’s race for attorney general is one of the most closely watched in the country, with Ms. Nessel seeking to defend her post as the top law enforcement official in a key battleground state.

Mr. DePerno, a lawyer who rose to prominence challenging the 2020 election results in Antrim County, was endorsed by former President Donald J. Trump in September 2021. This year, he clinched the endorsement of the state Republican Party, all but ensuring his nomination later this month.

Mr. DePerno’s candidacy for attorney general has worried election experts, Democrats and even many Republicans, who fear that he could use his powers to carry out investigations based on fraudulent claims or other forms of meddling in elections. He has also pledged to carry out inquiries of Gov. Gretchen Whitmer, Ms. Nessel and Ms. Benson, all Democrats.

Ms. Nessel asked for the appointment of a special prosecutor in the voting-machine case because of the likelihood that she will face Mr. DePerno in November.

“When this investigation began, there was not a conflict of interest,” the petition for a special prosecutor states. “However, during the course of the investigation, facts were developed that DePerno was one of the prime instigators of the conspiracy.”

It continues: “DePerno is now the presumptive Republican nominee for attorney general. A conflict arises when ‘the prosecuting attorney has a personal interest (financial or emotional) in the litigation.’”

The request for a special prosecutor followed a monthslong investigation by the attorney general’s office into a referral sent from Ms. Benson, the secretary of state, that unidentified people had gained inappropriate access to tabulation machines and data drives used in Richfield Township and Roscommon County.

Ms. Nessel’s office also contacted the Michigan Attorney Grievance Commission, which looks into allegations of legal misconduct in the state, and asked it to open its own inquiry “based on information uncovered during the tabulator investigation.” Such an investigation could affect Mr. DePerno’s standing as a lawyer in Michigan and potentially his ability to serve as attorney general.

Mr. DePerno and a spokeswoman for Ms. Nessel did not respond to requests for comment.