WASHINGTON — Democrats returned Representative Nancy Pelosi of California to the House speakership on Sunday for what may be her final term, handing a tested leader control of the slimmest majority in almost two decades as Washington prepares for a new Democratic president.

The nearly party-line vote punctuated an opening day marked more by precaution than pomp, as the 117th Congress convened under the threat of a deadly pandemic and awaited a pair of Senate runoffs in Georgia that will determine control of that chamber. Several House members sick with Covid-19 missed the session altogether and others cast their votes from behind a plexiglass enclosure specially constructed in a gallery overlooking the chamber.

Her victory means that after two years as President Trump’s most outspoken antagonist, Ms. Pelosi will now be responsible for trying to shepherd through Congress as much of President-elect Joseph R. Biden Jr.’s agenda as possible.

“Scripture tells us that to everything, there is a season: a time for every purpose under the heavens; a time to build, a time to sow, a time to heal,” she said in a speech after winning the speakership. “Now is certainly a time for our nation to heal. Our most urgent priority will continue to be defeating the coronavirus. And defeat it, we will.”

It will be no easy task. With her party in control of just 222 of 435 seats, Ms. Pelosi can afford to lose only a handful of Democrats on any given vote. Emboldened Republicans are gunning to retake the majority in next year’s midterm elections and are in no mood to extend an olive branch.

Representative Kevin McCarthy of California, the Republican leader, used his own remarks before presenting Ms. Pelosi the gavel to torch Democrats’ record in the majority and effectively declare the beginning of the campaign to wrest power from them. 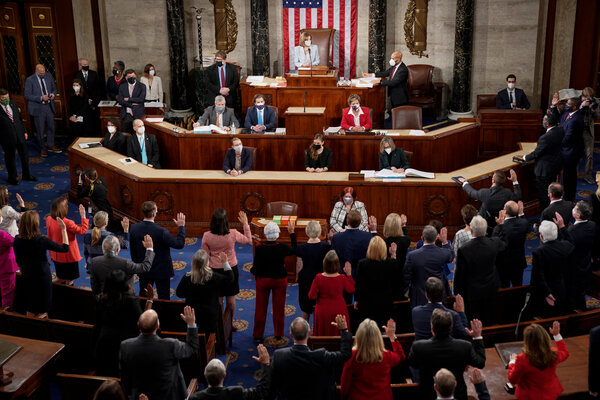 “It has been said that a house divided cannot stand,” he said. “Well, if there is any lesson Americans have learned in the last two years, it’s this: A House distracted cannot govern.”

Many of his members were preparing to use a normally perfunctory joint session of Congress on Wednesday to make one final, futile attempt to overturn Mr. Biden’s victory in key swing states and hand Mr. Trump a second term based on specious claims of election fraud. The effort was destined to fail, but was certain to set a bitter tone for the year ahead.

Ms. Pelosi secured 216 votes for speaker on Sunday afternoon, keeping defections within her party to just a handful despite grumbling from some moderates and progressives eager for new leadership.

Only five lawmakers ultimately broke ranks: Representatives Mikie Sherrill of New Jersey, Elissa Slotkin of Michigan, Abigail Spanberger of Virginia, Jared Golden of Maine and Conor Lamb of Pennsylvania. Crucially, Ms. Pelosi won over several Democrats who had defected two years ago, including Ron Kind of Wisconsin, Jim Cooper of Tennessee, Kurt Schrader of Oregon and Kathleen Rice of New York. Many said they took her at her word that this term would most likely be her last.

“It’s not personal. It’s not malicious. It just represents a feeling in my district that we need more Midwestern leaders and we need a different crop that represents a broader swath of the country,” Ms. Slotkin said in an interview.

With both chambers narrowly divided, Ms. Slotkin urged Democratic leaders to set aside messaging bills that have no chance of becoming law in the coming term and try to make bipartisan compromises.

Representative Don Young, Republican of Alaska and the longest-serving House member, made a similar appeal when he rose to administer the oath of office to Ms. Pelosi.

“I’ll be honest: I do not like what I see,” Mr. Young said. “It’s time we hold hands and talk to one another.”

He suggested the two sides ought to “sit down and have a drink.” Ms. Pelosi said she did not drink but would be happy to share ice cream, her favorite indulgence.

On the other side of the Capitol, six new senators were sworn in, but both parties were more concerned with the runoff elections scheduled for Tuesday. The outcome could determine the fate of Mr. Biden’s legislative goals on climate change, taxes and health care; his response to the coronavirus pandemic; and his ability to fill his cabinet and influential federal judgeships.

Republicans currently have an edge, with 51 seats to Democrats’ 48. Democrats would have to sweep both races to draw the chamber to a tie and effectively take control when Vice President-elect Kamala Harris, who would cast tiebreaking votes when needed, is sworn in with Mr. Biden on Jan. 20.

“To say the 117th Congress convenes at a challenging time would indeed be an understatement,” Senator Mitch McConnell, Republican of Kentucky, and the majority leader, said in brief congratulatory remarks. “From political division to a deadly pandemic to adversaries around the world, the hurdles before us are many and they are serious.”

At least one, the pandemic, made itself felt immediately inside the Capitol on Sunday. Dr. Brian P. Monahan, Congress’s attending physician, “strongly encouraged” lawmakers in a memo beforehand “to refrain from gatherings of any kind in their office spaces,” and warned that any family members accompanying them could be asked to produce negative test results.

Inside the House chamber, lawmakers took their oaths of office and voted for speaker in small groups, rather than all together in the normally boisterous hall of the House. At one point, aides had to press a newly elected Republican, Marjorie Taylor Greene of Georgia, to put on a mask as required under House rules, causing a minor stir. The architect of the Capitol even constructed a small plexiglass enclosure with its own ventilation system in one of the galleries overlooking the chamber so that three lawmakers in a protective quarantine could vote in person without mingling on the House floor.

Two newly elected Republicans, Maria Elvira Salazar of Florida and David Valadao of California, missed Sunday’s swearing-in altogether because they were home sick with the virus. A third, Luke Letlow of Louisiana, died last week of Covid-19 complications before he could be seated to the position he won in a December runoff.

Gwen Moore, Democrat of Wisconsin, arrived to cast her vote for Ms. Pelosi fresh off her own isolation, less than a week after she announced she had tested positive.

“It’s somber for sure,” said Representative John Katko, a New York Republican who just won re-election in a Democratic-leaning district. Mr. Katko said he drove to Washington alone on Sunday morning, without the company of his family who would normally come for a large celebration.

Still, there were moments to celebrate. Republicans swore in 17 new women in the House, more than doubling their numbers from the 116th Congress and setting a new high-water mark for the party and for the number of women in the House, 122, two years after Democrats swept into power with their own historically diverse cohort.

“Republican women are here to work, they are here to get things done,” said Representative Liz Cheney, the highest-ranking Republican woman, marking the achievement on the chamber floor. “As we like to say in Wyoming, it is time to cowboy up.”