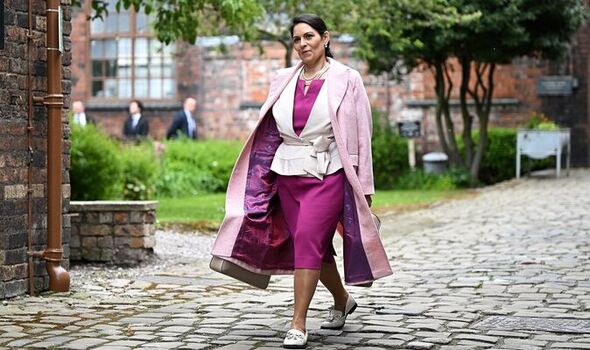 The Home Secretary said her critics want to “thwart” deportations and they back protesters who disrupt society. She also claimed immigration lawyers and Labour MPs often ask her not to deport “dangerous foreign criminals”. Ms Patel made her outspoken remarks, which infuriated rival MPs, in a Commons debate yesterday about crime and justice proposals in the Queen’s Speech.

The Home Secretary said the Conservatives are “the party of law and order”, adding: “Unlike some, we understand that freedom includes the freedom of the lawabiding majority to go about their business free from harm.

“Those on the benches opposite are eager to defend the murderers, paedophiles, rapists, thugs and people with no right to be here.They cheer on the selfish protesters who cause chaos and endanger lives.

“They back people who thwart the removal of foreign national offenders from our country.

“Parties opposite e voted against the Police and Crime Bill and the measures to stop the likes of Insulate Britain ruining the lives of ordinary working people.”

Detailing an expected overhaul of the Human Rights Act, the Home Secretary said: “Our Bill of Rights will reinforce freedom of speech and recognise trial by jury. It will strengthen our common law traditions and reduce our reliance on Strasbourg case law.

“The Bill of Rights will restore public confidence and curb the abuse of the human rights framework by criminals. This is a welcome and much-needed update 20 years after the Human Rights Act.

“Human rights are not something that should only be extended to criminals. I have lost count of the number of representations I have received from immigration lawyers and Labour members opposite begging me not to deport dangerous foreign criminals.”

“Since the Home Secretary was appointed to her job, crime is up by 18 per cent and prosecutions are down by 18 per cent. Community penalties are down too – not withstanding the Prime Minister and his Downing Street staff’s attempt to make valiant personal efforts to get those numbers back up again.”