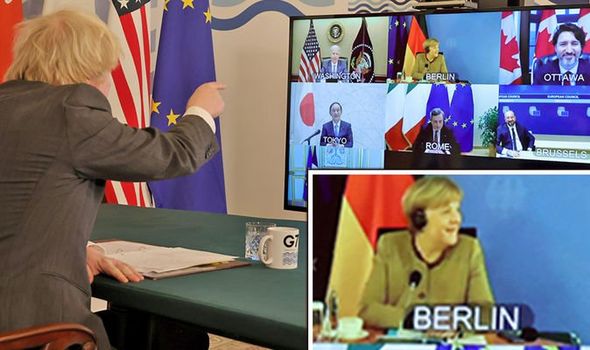 The German Chancellor accidentally interrupted the Prime Minister as he opened the call.

Oblivious to the fact she still had her mic on, Ms Merkel began taking over Mr Johnson as he tried to tell the group he wanted a face-to-face meeting at the G7 summit in June.

Mr Johnson was forced to stop his pre-written speech to ask Ms Merkel to turn off her mic.

Laughing at the situation the Prime Minister said: “Can you hear us Angela?

“I think you need to mute.”

In another turbulent moment to add to the chaos of the opening of the first meeting between the G7 leaders since April 2020, French President Emmanuel Macron arrived late, with the conference momentarily starting without him.

Mr Johnson was nearly 15 seconds into his opening remarks before the French President joined the call.