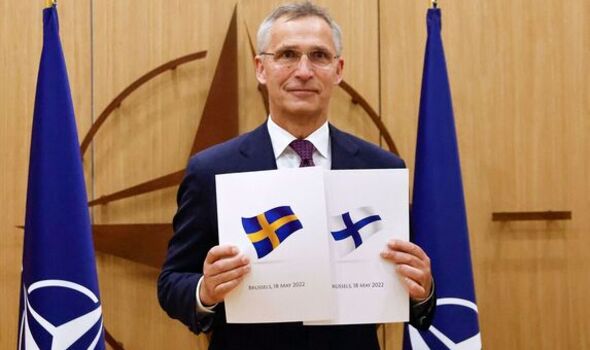 Despite warnings from Russian president Vladimir Putin that there would be “consequences” if the two Nordic nations joined, they said membership was vital due to the invasion of Ukraine changing Europe’s landscape.

Nato secretary-general Jens Stoltenberg confirmed that he had received application letters from Finland and Sweden’s ambassadors.

He said: “I warmly welcome the requests by Finland and Sweden to join. You are our closest partners. This is a good day at a critical moment for our security.”

The applications must now be considered by the 30 member countries. That is expected to take about two weeks before membership is ratified within two months.

The process usually takes 8 to 12 months but Nato wants to move quickly, given the threat from Russia hanging over the heads of the Nordic countries.

Only Turkish president Recep Tayyip Erdogan has expressed reservations. He claims Sweden and Finland harbour people he says are linked to terror groups, namely the Kurdistan Workers Party and followers of Fethullah Gulen, whom Turkey accuses of orchestrating a 2016 coup attempt.

Yesterday, Mr Erdogan said: “So you won’t give us back terrorists but you ask us for Nato membership? Nato is an organisation for security. We cannot say ‘yes’ to this security organisation being deprived of security.”

But US President Joe Biden dismissed his objections.

And Mr Stoltenberg said that Nato allies “are determined to work through all issues”.