The president said he wanted a much larger package than the $1.8 trillion measure under discussion. The top Senate Republican said his party could not accept a deal anywhere near that big. 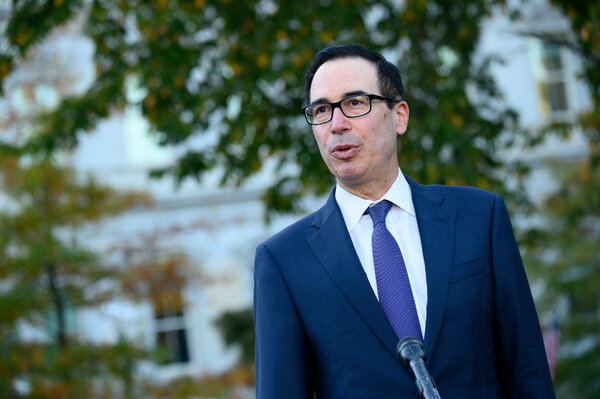 By Emily Cochrane and Alan Rappeport

WASHINGTON — President Trump clashed with his own party on Thursday over a stimulus package to stabilize the economy, calling for a big-spending plan of the kind envisioned by Democrats even as the top Republican leader declared that such a measure had little support within the party.

Mr. Trump declared he “would go higher” than the latest $1.8 trillion framework the White House has put forward in negotiations with Speaker Nancy Pelosi of California, faulting his own Treasury secretary for failing to offer enough money in the talks. A short time later, Senator Mitch McConnell, Republican of Kentucky and the majority leader, all but ruled out such a deal, saying senators in his party would never support a package of that magnitude.

“He’s talking about a much larger amount than I can sell to my members,” Mr. McConnell told reporters in Kentucky, a refrain he reiterated in multiple appearances across the state. Instead, he plans next week to try to advance a scaled-down $500 billion package, which is likely to fail without Democratic support.

The stark division between the top two Republicans in Washington was the latest indication of the dim pre-election prospects for enactment of a broad pandemic recovery package that economists have said is badly needed. Tens of millions of Americans have slipped into poverty, and the country’s economic recovery has faltered without federal assistance.

The public divisions also further undercut Treasury Secretary Steven Mnuchin in his attempts to reach an accord with Ms. Pelosi, who remains unmoved from the latest Democratic offer of $2.2 trillion.