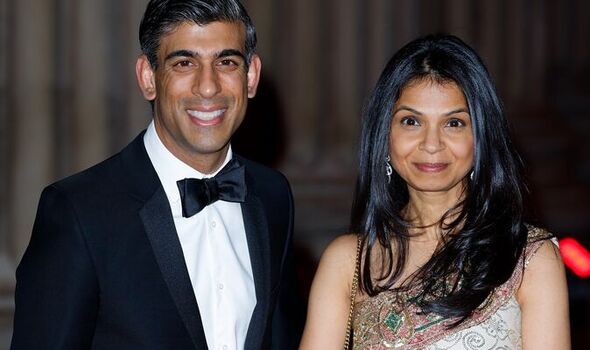 The Chancellor has come under pressure over Akshata Murthy, having a 0.91 per cent stake in Infosys, a company founded by her father, which continues to operate in Russia. Speaking to the BBC’s Newscast podcast, Mr Sunak said: “You know, I think it’s totally fine for people to take shots at me. It’s fair game. I’m the one sitting here and that’s what I signed up for.” But he added: “I think it’s wrong for people to try and come at my wife.”

A statement from the firm is reported to have said there was a “small team” based in Russia that services global clients but the company did not have “any active business relationships with local Russian enterprises”.

However, Labour and the Liberal Democrats have called for Mr Sunak to answer questions over the issue. In the

Commons yesterday, shadow cabinet office minister Fleur Anderson said: “The Chancellor has asked businesses to think very carefully about any investments that would in any sense support Putin and his regime.

“However, this is pretty hypocritical given he and his family are still making millions from Infosys, a company still trading out of Moscow.”

Commons Speaker Sir Lindsay Hoyle intervened, saying: “We can’t use the word hypocritical against the Chancellor.” Ms Anderson said: “I withdraw that.”

Cabinet Office minister Steve Barclay said he would not “engage in a number of sweeping comments which are not about addressing the record of this government”.

Mr Sunak added in his interview: “Someone said, ‘[England cricket captain] Joe Root, Will Smith, and me – not the best of weekends for any of us.'” He was referring to England losing their latest Test series and actor Smith hitting Oscars host Chris Rock.

Mr Sunak said: “At least I didn’t get up and slap anybody, which is good.”

Previously, Mr Sunak refused to answer questions about his wife’s involvement in Infosys.