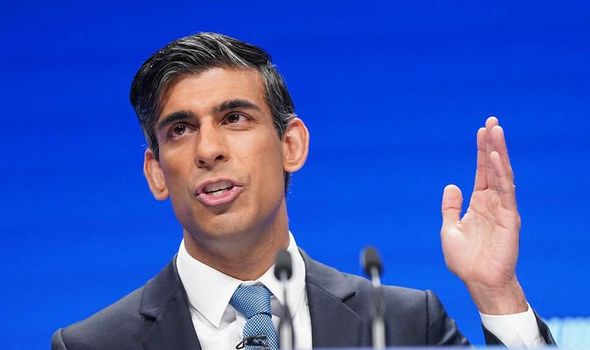 Industry leaders have lined up to demand help for pubs, restaurants and hotels after they saw festive trade disappear with cancelled holiday breaks and Christmas parties leading to massive losses and staff being laid off.

The problems have been highlighted in an exclusive survey for the Sunday Express of rural pubs which has revealed that more than half of landlords believe they are “likely” to be forced out of business by covid restrictions unless the Government can come to their aid.

Leading calls for action, Hannah Essex, co-executive director of the British Chamber of Commerce, claimed businesses will fail unless they are given support from the Treasury amid rising cases of the Omicron variant of coronavirus.

Speaking on BBC Breakfast, she said: “What we need to hear pretty much now, over the weekend, which should have been one of the busiest weekends of the year for businesses, is what are they going to do. Doing nothing is not an option right now… or we will see businesses fail.

“The Treasury have been phenomenal in terms of supporting businesses – the furlough scheme, the grants, the loan schemes – all of these things have kept these businesses going right to this point from when things started in March 2020, but they’re now in a position where they’ve used up cash reserves, their costs are going up quite dramatically because of the massive surge in inflation and suddenly at the time that should have been the time which would help them through into next year, their customers have just disappeared.

“So, we will see business failures if there isn’t any support coming in now.”

“The last 20 months have been absolutely brutal for this sector. They were just starting to see things pick up and this is the point at which we could see them fall over the edge … and will inevitably lead to job losses as well,” she told BBC Breakfast.

The Countryside Alliance conducted the survey for the Sunday Express as part of its UnLockInn campaign to gauge the impact on pubs of the latest restrictions being brought in to tackle the Omicron variant of covid with Christmas parties across the country being cancelled.

It comes as Chancellor Rishi Sunak has met with representatives of the hospitality industry to discuss ways of bailing them out after losing out on one of the most profitable seasons of the year.

The survey of 25 pubs across the UK found that just one had seen an increase in trade this year while 23 have seen it drop.

Already 42 percent have been forced to lay off staff because of lost revenue and 54 percent are closing early.

In total 85 percent reported Christmas party cancellations and one in five have seen losses of more than £20,000 while about 40 percent have had losses of above £10,000.

The survey found that 54 percent believed they were “likely” to go out of business next year unless restrictions are lifted or the Chancellor keeps his promise to help bail them out for lost business.

One in five said they were “very likely” to go bust.

Mo Metcalf-Fisher of the Countryside Alliance said: “It’s clear the situation pubs are facing is incredibly bleak, as many sadly face further cancellations and a loss in custom.

“The public’s response to the everchanging Covid messaging is having a direct knock on effect for hospitality businesses who depend on heavy December footfall to see them through to the busier summer months.

“The time to act is now. Urgent consideration should be given to supporting these businesses financially, so as to avoid future closures and job losses. Pubs form the backbone of communities up and down the country and we cannot risk losing them. In the meantime, please support your local pub this Christmas.”

After the rebellion of 101 Tory MPs against vaccine passports, Mr Sunak is also facing pressure from the backbenches to help out pubs and restaurants.

Greg Smith, the Conservative MP for Buckingham said: “Pubs and restaurants across my constituency are suffering, some with over 50 percent of bookings cancelled.

“My message is clear, when the Government brings in measures that hamper business it is their moral duty to make support available to save those businesses. Likewise I urge everyone to get their booster jab, do a lateral flow test if they wish, and get out to support their local.”

There has been widespread fury over the restrictions from the hospitality industry which some believe have effectively become “an unofficial lockdown.”

“The Prime Minister says this is for hospitality, this is for you. We don’t want it.  I know nightclub bosses. They do not want covid certification. The hassle and the principle will put people off. We are meant to live in a free society. People will see this as a police state.”

Parvez Unmar, General Manager of international hotel chain Roseate Hotels and Resorts – said: “The government’s new advice to limit contacts has been like a bloodbath to the hotel industry. We have already had mass cancellations and many hotels can no longer afford to hold onto staff. It has also knocked confidence in international travel which affects takings for 2022 as London will not be seen as a holiday destination.

“Coupled with the increase in inflation this new advice is simply crippling businesses. Support provided by furlough is not enough and staff cannot survive on 70 or 80 percent of their wages – we have had to top them up. But this is increasingly becoming unaffordable for many. If there is another lockdown or severe restrictions many hotels may never recover and many others will have to let go of staff.”

Sacha Lord, night time economy adviser for Greater Manchester tweeted: “Hundreds of thousands of staff hours are being slashed up and down the UK due to cancellations. A large proportion are on a living wage. Xmas is looming, and many now have no income.

Your silence is deafening @RishiSunak.”

And he urged the government to freeze VAT for two years and urged it not to “hike taxes” for “the second time in two months,” to help reduce costs on businesses.

Kate Nicholls, chief executive of UK Hospitality, added: “The situation is dire and worsening on a daily basis as sales slump, losses mount and bills start to have to be paid on minimal revenue.

“There is a need for urgency, pace and scale to reset the current mismatch between health policy, consumer confidence and economic reality.”