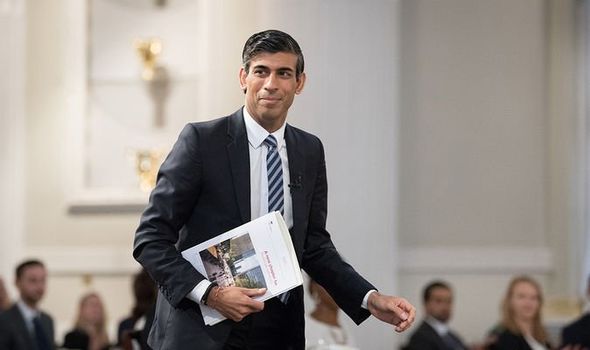 But he told pensioners they will still get an increase that covers cost of living hikes.

Mr Sunak said he hoped people would see that the change was “fair” as the Government grapples with balancing the books after the pandemic as well as tackling problems in social care.

He said: “It’s temporary, it’s just for this year and so hopefully pensioners will feel reassured that not only have we protected them in the past, we are protecting them this year with an at least 2.5 percent increase in pensions or higher if that cost of living is increasing faster than that.

“And we will continue with the triple lock thereafter.”

Under the triple lock, payments go up by 2.5 percent, the rate of inflation or average earnings, depending on which is highest.

Average earnings are expected to be more than eight percent higher compared to last year at the point the Government would traditionally make the calculation this autumn. The big jump is caused by the drop in wages last year as jobs were cut and workers were furloughed, followed by a rebound as the economy reopened.

An eight percent hike would have been worth around £14 a week for those on the new state pension and around £10 for the old version in April and would have cost around £3billion.

But the increase is now set to be pegged to September’s Consumer Price Index rate of inflation, which is expected to be around 3.1 percent. It will mean a weekly increase of £5.56 for pensioners on the new system and £4.26 for the rest.

Boris Johnson said: “What we are trying to deal with is a statistical freak caused by the Covid pandemic so that one of the data in the triple lock is jabbed down then up again very sharply with a weird effect on pensions.”

Former pensions minister Sir Steve Webb, partner at pension consultants LCP, said the settlement could have been “much worse for pensioners”.

He added: “The real prize today is the commit- ment to revert to the triple lock for future years. The Treasury will have argued to get rid of it and I think in many ways pensioners can breathe a sigh of relief that this is for one year only.”

But campaigners said the Government was leaving pensioners facing further poverty and had missed an opportunity to bring payments in the UK into line with other wealthy nations.

Lord Foulkes, co-chair of the All-Party Parliamentary Group Older People, said: “This is the unkindest cut of all. More poorer pensioners who depend on the basic pension will now sink into poverty, even destitution.

“They will not forget how Johnson has broken yet another manifesto promise.”

Caroline Abrahams, charity director at Age UK, said: “If suspending the triple lock for a single year helps get a Government deal on social care over the line then I believe it’s a price worth paying, but only if it really is just a one-off measure and not a sneaky way for ministers to ditch the triple lock all together.”

Work and Pensions Secretary Therese Coffey will introduce a bill in the Commons today to enact the temporary changes.

She told MPs the triple lock will be restored after the one-off suspension.

Ms Coffey said the move “will also ensure that as we are having to make difficult decisions elsewhere across public spending, including freezing public sector pay, penfor sioners are not unfairly benefitting from a statistical anomaly”.

She added: “At a time when we have made tough decisions to restore the public finances which have impacted working people, such as freezing income tax personal thresholds at current levels, this would not be fair.

“Setting aside the earnings element is temporary and only for one year. This means we can and will apply the triple lock from next year for the remainder of this Parliament in line with our manifesto commitment.”

Helen Morrissey, senior pension and retirement analyst at financial services company Hargreaves Lansdown, said: “The triple lock has played a role in boosting the incomes of pensioners over the past decade, but the current situation has exposed its flaws.

“While the suspension is only for a year, the time has come to look at whether the triple lock is fit for purpose and remains the best way to preserve the long-term value of the state pension.”

OLDER people could be forgiven for feeling they are under attack on all fronts.

The decision to freeze the triple lock on the state pension increase, reducing it this year to 2.5 percent, is the latest example of the Government targeting the oldest and most vulnerable in Britain.

Sadly, we fear this is just a first step to scrapping a measure that was designed to prevent one of the lowest state pensions in the economically developed world from falling even further behind.

In the past few years, pensioners have seen their incomes fall in real terms while living costs continue to spiral upwards.

Over-75s lost their free TV licences – a benefit brought in to compensate for the low state pension – after the Government abdicated responsibility for it. Free prescriptions for those aged 60 to 66 seem to be next in line for the axe.

Meanwhile, pensioner poverty is on the rise. Around 2.1 million older people live on what is seen as relative low income, before housing costs, and many NPC members tell us they sometimes must choose between eating, heating their homes and paying their TV licence fee.

The Government has painted a picture of wealthy retirees, selfishly hanging onto their homes and savings. This is a complete red herring designed to pit young against old. Protecting the triple lock means protecting children and grandchildren from poverty in old age.

What might seem a whopping 2.5 percent increase on these pensions works out at just £4.49 a week more for the new pension, £3.44 for the old basic, and just £2.25 extra for the lowest.

And the biggest proportion of those on £90 a week are women – hardly a surprise when the gender pay gap currently sits at a staggering 40.3 percent.

Contrary to think tanks, the triple lock is affordable and has only given a rise in pension above that expected on one occasion.

The NPC challenges Therese Coffey and Rishi Sunak to live on the basic state pension for three months if they think it is so good.