CHARLESTON, S.C. — Gov. Steve Bullock of Montana, who argued relentlessly that his track record of winning in a deep red state made him the Democrat best positioned to beat President Trump in 2020, announced on Monday that he would end his presidential bid.

“I am suspending my campaign to become the Democratic Party’s nominee for president,” Mr. Bullock said in a statement. “While there were many obstacles we could not have anticipated when entering this race, it has become clear that in this moment, I won’t be able to break through to the top tier of this still-crowded field of candidates.”

Mr. Bullock, 53, was unable to overcome a late and slow start that hobbled his campaign. Democratic voters never bought into his argument that winning election in a state carried by Mr. Trump was sufficient evidence that he should be the party’s presidential nominee.

An aide said he would not challenge Senator Steve Daines, a Montana Republican facing re-election in 2020, as has been the hope of many Democrats in Washington. 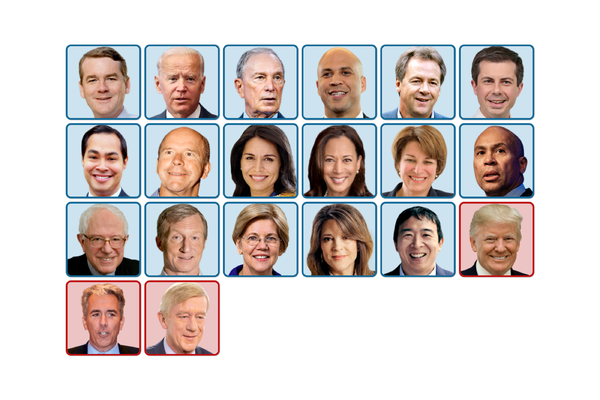 Who’s in, who’s out and who’s still thinking.

Having started his presidential campaign without a national fund-raising list or much exposure outside his home state’s one million residents, Mr. Bullock failed to break out of the third-tier pack of candidates. He never registered more than 1 percent support in the dozens of polls the Democratic National Committee used to determine which candidates qualified for the party’s televised debates.

Mr. Bullock’s pragmatic message of Trump-state success didn’t catch on with the party’s donors, either. He had raised just $4.4 million by the end of September, a pittance for a modern national campaign. Former Representative Beto O’Rourke, who dropped out of the race last month, raised more on his first day as a candidate.

The failure of Mr. Bullock’s campaign illustrates how presidential primaries have been nationalized in recent cycles. Bill Clinton was able to rise from a small-state governorship to the presidency — in a race with a Republican incumbent — by concentrating on New Hampshire early in the 1992 contest. But Mr. Bullock, who focused on Iowa this year, barely got noticed by Democrats there, even though he is a popular two-term governor with accomplishments that included pushing a Medicaid expansion through a Republican-controlled state legislature — a task that delayed his entry into the race.

Even one of Iowa’s highest-profile endorsements, from Attorney General Tom Miller, could not move the needle for Mr. Bullock among Iowa Democrats, many of whom had been saying for months that they were overwhelmed by the number of candidates in the race.

Mr. Bullock flew from his home in Helena, Mont., to Des Moines on Sunday to inform his staff personally there that he was ending his campaign.

“I entered this race as a voice to win back the places we lost, bridge divides and rid our system of the corrupting influence of dark money,” Mr. Bullock said Monday. “While the concerns that propelled me to enter in the first place have not changed, I leave this race filled with gratitude and optimism, inspired and energized by the good people I’ve had the privilege of meeting over the course of the campaign.”

Mr. Bullock in May became the 22nd Democrat to enter the 2020 presidential race — and both the size of the field and his relatively belated decision to join it contributed to his exclusion from the first Democratic debate the next month.

Without that chance at exposure, he was forced to play catch-up. He focused much of his agenda on overhauling the campaign finance system and promised to make Democrats competitive in the country’s interior.

Mr. Bullock participated in the party’s second debate in July and introduced himself to voters, but he did not qualify for any other debates. He griped about his exclusion in his campaign’s online videos and to reporters, but said he was putting his faith in Iowa caucusgoers, not party officials.

“My expectation is it’s not D.N.C. rules that will decide this,” Mr. Bullock said after a September campaign stop in Manchester, Iowa. “It’s not nationalized, it’s folks here in Iowa that take this all very, very seriously.”

A Columbia University-educated lawyer who had served as Montana’s attorney general, Mr. Bullock made his name as a pragmatist who was able to win Republican support for liberal priorities. He was twice elected governor of a state that President Trump carried by more than 20 percentage points.

Mr. Bullock brandished those credentials on the trail, often reminding voters that he was the only candidate in the historically large field who had “won a Trump state.” He cautioned voters that the party’s leading contenders, including Senators Elizabeth Warren and Bernie Sanders, were focused on issues like calling for a single-payer health care system that he warned would cost Democrats in a general election against Mr. Trump.

“Many of the issues that folks are talking about through this primary, they sound good through the primary, but I don’t know that that’s what’s going to be able to win this overall election,” he said in the September interview in Iowa. “I have grave concerns that we’re already on our way to losing this election.”

Mr. Bullock’s campaign was marked by cheeky publicity stunts and his regular calls for reducing the influence of money in politics. When Michael R. Bloomberg, the billionaire former mayor of New York, spent tens of millions of dollars on television ads for his own presidential campaign last month, Mr. Bullock issued one of his final campaign pleas.

“The Democratic primary isn’t for sale — and a billionaire spending hundreds of millions of dollars to buy an election isn’t going to fix our political system,” he said.

Seventeen Democrats are still in the race, and 11 have dropped out, including former Representative Joe Sestak of Pennsylvania, who ended his campaign on Sunday.

Term limits prevent Mr. Bullock from seeking a third term as governor, and some Democrats have held out hope that he will eventually run for the Senate.

The governor, however, has repeatedly said that he has no desire to do so. His spokeswoman, Galia Slayen, said Monday that Mr. Bullock would complete his term as governor and would not seek to challenge Mr. Daines.

“While he plans to work hard to elect Democrats in the state and across the country in 2020, it will be in his capacity as a governor and a senior voice in the Democratic Party — not as a candidate for U.S. Senate,” Ms. Slayen said.