Irish Taoiseach Micheál Martin humiliated BBC’s Andrew Marr this morning after fact-checking the political host within seconds of their interview. When Mr Marr questioned the Taoiseach on the ongoing EU vaccine row that erupted this week, Mr Martin was prompted to hit back: “That’s not right, Andrew.” The slap down came as the the BBC host questioned where Mr Martin first heard about the EU’s plan to suspend the Brexit deal on Northern Ireland. 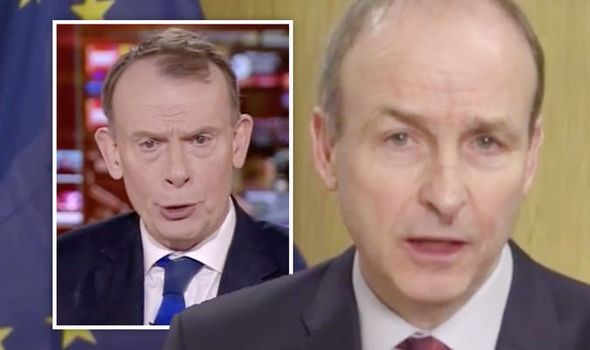 Mr Marr said: “Was it really true that the first you heard about this extraordinary EU plan was when Boris Johnson phoned you and told you about it?”

Ireland’s Taoiseach responded: “No, that’s not right Andrew. I don’t where you got that from but that was certainly not the case.

“The Commission issued a public announcement and that’s where we first became aware of it.

“We contacted Ursula von der Leyen’s team immediately, and articulated the very serious implications that the move would have for the protocol itself.

“Fortunately the Commission did issue a statement pulling back and reversing its decision.”

In an apparent dig at fact-checking the BBC host, Mr Martin added: “That is the factual situation as it emerged.”

The EU wanted to block vaccines entering the UK through “the back door” with checks at the border of the Republic and Northern Ireland.

Irish foreign minister Simon Coveney said: “The idea that we’d be triggering Article 16 for any reason, apart from some absolute and dramatic emergency, it shouldn’t have happened.”