Did you vote? We created virtual voting stickers for you to download, especially for people who did not receive one. Find them below and share them on social media along with a sentence about how it felt to participate in this election, using the hashtag #nytelection. We plan to share a selection on the @nytimes social media accounts.

If a United States citizen casts a vote but doesn’t receive an “I Voted” sticker to prove it, does the vote really count?

Of course, but that doesn’t diminish the Election Day appeal of an “I Voted” sticker, which many Americans who have performed their civic duty display proudly on their chests.

As postvoting selfies overtake Instagram algorithms, an “I Voted” sticker is a must-have accessory to prove that you did, in fact, do your part.

But with more people voting by mail than ever before because of the pandemic, filling out ballots from beds and kitchen tables, many have not received a civic duty souvenir. Because many jurisdictions don’t distribute the stickers with mail-in ballots, some voters have gotten creative this year by making their own, downloading digital decals or affixing virtual “I Voted” stickers to their Facebook or Instagram posts.

Sure, it might be just a small, sticky piece of paper, but to many it’s symbolic of much more.

Ben Hovland, the chairman of the Election Assistance Commission, a federal agency that serves as a liaison with state election officials, said he collects “I Voted” stickers and uses them to cover his notebooks. Among his favorites: one from Douglas County, Nev., that says “I Voted” in Braille; a George Rodrigue Blue Dog design from Louisiana; and a New York City sticker that borrowed from the subway map. 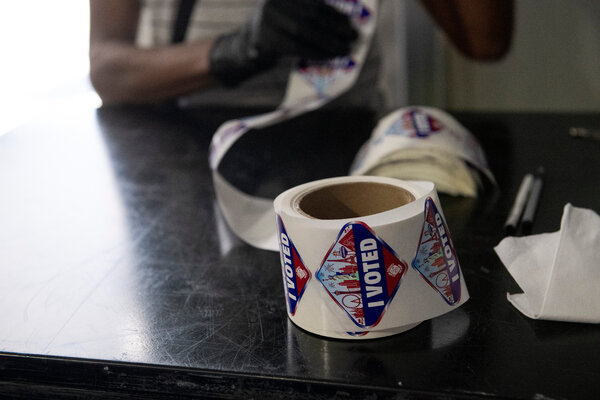 “It’s a way for people to show off their civic pride, that communal feeling,” Mr. Hovland said. “Surprisingly, people just like stickers.”

The sticker is not only a physical prompt that encourages others to vote, but also a “social signal” and a way of showing pride in the democratic system, said Judith A. Hall, a professor of psychology at Northeastern University.

“I feel a surge of emotion when I vote, which is not just about hoping my candidate wins,” Professor Hall said, noting that she voted by mail and did not receive a sticker this year. “It’s about knowing I’ve participated in a priceless collective activity. It touches the emotions, not just one’s rational brain that says, ‘Voting is good.’”

Though campaign posters and buttons have long encouraged people to vote for the sake of voting, the “I Voted” sticker is relatively new, said Claire Jerry, a curator at the National Museum of American History.

The sticker became popular in the 1980s, but its exact origin is disputed. The Phoenix Association of Realtors in Arizona claimed it was the first to use a sticker to encourage voters in 1985, but The Miami Herald reported in 1982 that South Florida businesses were offering discounts to people wearing “I Voted” stickers — a practice that is technically illegal.

The original white oval design remains the most familiar. The waving American flag and the prominent message, “I Voted,” connects a shared national symbol to the personal act of voting, Ms. Jerry said.

Over the years, jurisdictions have personalized the stickers with state seals or local landmarks. This year, voters in Orange County, Fla., home to Orlando and much of Walt Disney World, are being given stickers featuring Cinderella’s Castle, a palm tree and an orange as the letter O in “vote.” In Los Angeles, stickers honor voting locations, including Dodgers Stadium, Staples Center and, with a “Hamilton” sticker, the Hollywood Pantages Theater.

Some states, including Ohio and Maryland, hold contests to determine the design of their stickers. Elsewhere, state and local election officials have commissioned artists. In Alaska, Barbara Lavallee designed four stickers featuring Alaskan women, a nod to the 100th anniversary of women’s suffrage. The stickers were translated into 10 languages.

This year, some early voters left the polls with “I Voted” pens and touch-screen styluses, in addition to stickers. In some places, “I Voted Early” stickers were handed out. Other jurisdictions distributed stickers digitally.

The stickers are usually paid for by local governments, but in some cases nonprofits and other civic organizations foot the bill. In 2012, Mic estimated that it would cost more than $34 million to provide a sticker to every registered voter in the country.

Some counties have done away with stickers to cut costs. In 2012, election officials in Santa Clara County, Calif., said they had saved more than $90,000 by not including stickers with mail-in ballots.

“I think it’s one of those things where it’s a little lighthearted and it gets a chuckle, but people definitely enjoy the stickers,” Mr. Hovland said. “When you run out of them, that’s a tough time for a poll worker. People get upset.”

For many, stickers are a central, tangible representation of civic engagement, one that they can wear in selfies or on the street to galvanize others to vote.

“I always wear my ‘I Voted’ sticker with joy and pride,” Professor Hall said. “Not so much self-pride, as pride in the community that allows this to happen.”