New DUP leader Edwin Poots said Brussels does not seem to care about the peace process and is doing “demonstrable harm” to the area. He warned of a summer of violence if the border checks the EU continues to insist on are not eased.

“I can assure you Northern Ireland should be nobody’s plaything, we are citizens of the United Kingdom, we were citizens of the European Union and we deserve to be treated with the same respect as everyone else.”

More checks on goods from Great Britain arriving at Northern Ireland’s ports will be carried out every week than in Rotterdam, Europe’s biggest port, once grace periods end.

Mr Poots called for the protocol, which was drawn up to stop a hard Irish land border in the Brexit negotiations, to be ditched. 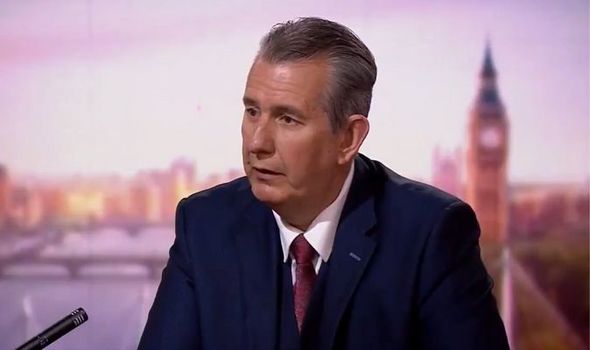 He said European commissioners have previously “put their heart and soul into winning peace in Northern Ireland” but now “don’t seem to care for the peace process”.

Mr Poots said the UK Government has the grounds to trigger Article 16 to put the brakes on the Protocol due to “economic and societal damage”, warning about future difficulties in receiving food and medicines.

European Commission vice-president Maros Sefcovic denied the claims and floated the idea of a Switzerland-style agreement that would “get rid of 80 per cent of checks”.

“I think it would be the right thing to do, it would calm down the situation,” he said.

But Mr Sefcovic insisted the protocol cannot be dropped.

“For us, and not only for us but also for the UK Government, the response was very clear that it was the Protocol,” he said.

“I think that now, what we should do is to focus on the policies and politics that rather unite than divide us.

“I think we have also to turn the table a little bit in this discussion and look at what the Protocol brings as an opportunity to Northern Ireland.”