Emily Thornberry was grilled on the “evidence” for her claim that Boris Johnson “sucked up” to Donald Trump. Ms Thornberry struggled to back up her attack on Boris Johnson during an interview with Sky News’ Sophy Ridge. Labour’s shadow International Trade Secretary told Sophy Ridge: “When Trump was elected, they had a choice to make.” 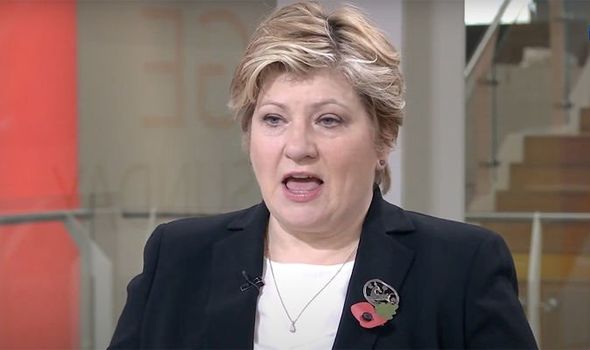 She continued: “They could have spent their time holding his hand, sucking up to him, and hoping to get some crumbs from the table.

“How has that worked? We have got nothing from that. We have tariffs on whiskey because of a long-standing dispute on air travel.

“We are meant to be doing a trade deal and we can’t even get these tariffs off?

“We can’t even get the killer of Harry Dunn to the UK to face our justice.

“Boris has gone personally to his good friend Donald Trump and asked for these things and got nothing.”

“What’s the evidence for that, genuinely?”

“They have never criticised or disagreed with him.”

Ms Ridge pointed out that foreign politicians don’t typically criticise others or intervene in their elections.

She added: “There is also a lot of clear water on things like trade, on Iran on climate change.”