WASHINGTON — The senior State Department official in charge of Ukraine told impeachment investigators last month that he was alarmed at President Trump’s insistence that Ukraine “initiate politically motivated prosecutions,” casting the effort as the kind of tactic the United States typically condemns in the world’s most corrupt countries.

George P. Kent, the deputy assistant secretary of state in the Bureau of European and Eurasian Affairs, testified that he regarded the push for investigations — spearheaded by Rudolph W. Giuliani, the president’s personal lawyer — as “injurious to the rule of law,” and to decades of American foreign policy.

“There is an outstanding issue about people in office in those countries using selectively politically motivated prosecutions to go after their opponents,” Mr. Kent said in his interview with the House Intelligence Committee, according to a transcript released on Thursday. “And that’s wrong for the rule of law regardless of what country that happens.”

Mr. Kent said he documented his concerns in a memo that he wrote over the summer, weeks before the public disclosure of a whistle-blower complaint about a July 25 call in which Mr. Trump pressured President Volodymyr Zelensky of Ukraine, to begin investigations of former Vice President Joseph R. Biden Jr. and the 2016 election.

In his testimony, Mr. Kent offered a new detail that appeared to underscore that political motivation was at the heart of Mr. Trump’s demand for investigations by Ukraine, saying that he was told that the president wanted to hear the country’s leader say the name “Clinton” in connection with potential wrongdoing.

Mr. Kent described being briefed about an early September conversation in which Mr. Trump told Gordon D. Sondland, the ambassador to the European Union, that Mr. Zelensky should publicly commit to investigating the Bidens and questions about Democratic collusion in 2016.

“POTUS wanted nothing less than President Zelensky to go to microphone and say investigations, Biden and Clinton,” Mr. Kent said, using an acronym for “president of the United States.”

Mr. Kent said that he understood “Clinton” to be a shorthand reference to an investigation of the 2016 campaign.

That would suggest that Mr. Trump had politics in mind — not just a broader interest in Ukraine’s anticorruption agenda, as his defenders have insisted — when he pressed Mr. Zelensky to take action. But Mr. Kent acknowledged during his testimony that his account of the conversation was not firsthand, and other witnesses have not mentioned it. 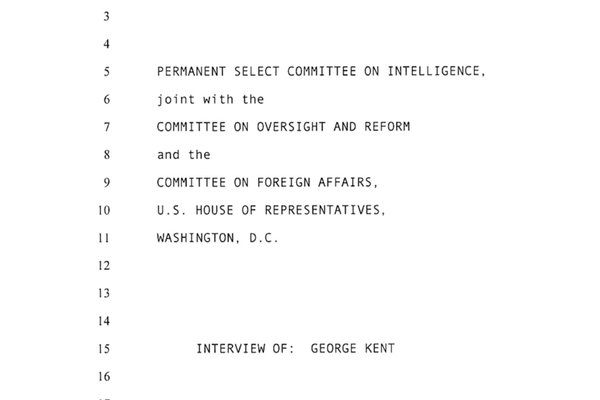 A senior State Department official in charge of Ukraine policy told investigators that he was cut out of decisions regarding the country.

The transcript of Mr. Kent’s testimony revealed the depth of his outrage at how the United States’ policy toward Ukraine has been handled under Mr. Trump. He said he believed the policy was being perverted by Mr. Giuliani and others outside of the normal channels of diplomacy. And he told the inquiry that initiating investigations for political reasons was “wrong.”

Mr. Kent is one of the lower-profile players in the Ukraine affair, but the 355-page transcript of his account helps explain why Democrats have called him to be a witness during their first public hearing on Wednesday. A career foreign service officer who regularly sports a bow tie, Mr. Kent spoke with precision and conviction about what he described as a dangerous scheme by Mr. Trump’s loyalists to bend foreign policy toward Ukraine to their political ends, undermining the rule of law and imperiling America’s standing.

“As a general principle, I do not believe the U.S. should ask other countries to engage in politically associated investigations and prosecutions,” he said. “I don’t think that as a matter of policy the U.S. should do that, period, because I have spent much of my career trying to improve the rule of law.”

Democrats plan to begin public hearings next week as they seek to build their case that Mr. Trump abused his power by withholding military aid and the promise of a White House meeting unless Ukraine agreed to the investigations. Mr. Kent and William B. Taylor Jr., the top diplomat in Ukraine, will be the first witnesses called by the Democrats to testify in a set of highly anticipated hearings that are likely to be televised live.

Late Thursday night, the committee issued a subpoena to compel Mick Mulvaney, the acting White House chief of staff, to appear for a closed-door interview on Friday. An official working on the impeachment inquiry cited Mr. Mulvaney’s admission during a White House briefing — which he later tried to recant — that there was a quid pro quo to hold military aid hostage for the investigations Mr. Trump wanted.

Mr. Mulvaney, one of the president’s top advisers, is not expected to comply with the subpoena; the White House has asserted ”absolute immunity” to block top aides from testifying before Congress. The committee official said that Mr. Mulvaney should not “hide behind the president’s continuing efforts to conceal the truth and obstruct our investigation.”

Representative Adam B. Schiff, Democrat of California and the chairman of the Intelligence Committee, formally invited Republicans on Thursday to request witnesses for the public hearings. Under rules governing the impeachment process adopted by the House, Republicans have until Saturday morning to make their requests, which are subject to a vote in the Democratic-controlled committee.

Ms. Williams told investigators that the July call stood out as unusual to her because she was not accustomed to a president discussing domestic political issues, rather than diplomatic matters, with a foreign leader, according to three people familiar with her remarks. But unlike other White House officials who listened in, she did not take any steps to report concerns to her superiors and made only a passing reference to the call in briefing materials for Mr. Pence.

Ms. Williams also offered insight into a meeting between Mr. Pence and Mr. Zelensky in Warsaw in early September, when other government officials were pressing the Ukrainians to publicly announce the investigations Mr. Trump sought if they wanted $391 million in security aid earmarked for the country to begin flowing. In the meeting, Ms. Williams said, Mr. Zelensky asked the vice president about the delay in releasing the aid, but neither man mentioned the Ukrainian energy company Burisma, the Bidens or 2016. Mr. Pence simply told Mr. Zelensky that the Americans would make a decision on the security assistance soon, and the two leaders discussed only broadly Ukraine’s anticorruption priorities.

Mr. Pence told reporters on Thursday that “as the facts continue to come out, people will see that the president did nothing wrong, that the focus of our administration and all of my contacts with President Zelensky were in the national interests.”

John R. Bolton, Mr. Trump’s former national security adviser, did not show up on Thursday for a voluntary interview as part of the House impeachment inquiry, but Democratic investigators said they would not subpoena him and would instead use his refusal to appear as further evidence of Mr. Trump’s attempts to obstruct Congress.

Mr. Bolton, who regularly interacted with Mr. Trump directly as his top national security aide in the White House, would have been among the highest-profile advisers to testify in the impeachment inquiry. Several other witnesses have described Mr. Bolton as being angry about the idea of holding up military aid to Ukraine in exchange for the country opening an investigation into the president’s political rivals.

But an official with the Intelligence Committee said panel members did not want to allow the Trump administration to “play rope-a-dope with us” in the courts and slow down their inquiry.

The transcript of Mr. Kent’s testimony makes clear that he and other State Department officials responsible for the United States-Ukraine relationship were deeply alarmed by smears and accusations of disloyalty by Mr. Giuliani and his allies in Ukraine against Marie L. Yovanovitch, the former United States ambassador there.

Mr. Kent testified that he watched with growing exasperation as what had begun as a fringe campaign against Ms. Yovanovitch moved into Mr. Trump’s inner circle and eventually led the president to recall her to the United States this spring.

“Mr. Giuliani, at that point, had been carrying on a campaign for several months full of lies and incorrect information about Ambassador Yovanovitch, so this was a continuation of his campaign of lies,” Mr. Kent said. He called Mr. Giuliani’s attacks “untrue, period” and called it a “crisis that was threatening to consume the relationship” between the United States and Ukraine.

Despite their concerns, requests from the Kiev Embassy and Mr. Kent’s bureau for strong expressions of support for Ms. Yovanovitch by the State Department were declined, he said.

Asked by House investigators whether he expressed his concerns about Mr. Giuliani to others at the State Department, Mr. Kent said that he was advised not to make waves by Philip T. Reeker, his supervisor and the acting assistant secretary in charge of European and Eurasian Affairs.

“After Giuliani attacked me, as well as Ambassador Yovanovitch and the entire embassy,” Mr. Kent testified, “I was told to keep my head down and lower my profile in Ukraine.” He said the message came as he left for a hiking trip to Maine.

“And so I said, ‘Fine, you’re not going to hear me talk about any country for the next week and a half,’” Mr. Kent said. “And I did cancel some public appearances on Ukraine in June, sort of think tank sessions around Washington.”