While more civil, the 90-minute contest held on the campus of the University of Utah in Salt Lake City, did not lack for thrust and parry. Analysts said Harris – whose performance was keenly anticipated and closely watched – got the better of Pence.

From the beginning, Harris used her prosecutorial background to try to paint President Trump as a failure on issue after issue of concern to the voters – most notably COVID-19.

Harris took the first question of the debate about how she and Joe Biden would respond differently to the coronavirus pandemic and turned it into a broadside volley against what she called Trump’s leadership failure, a theme she returned to over and over. 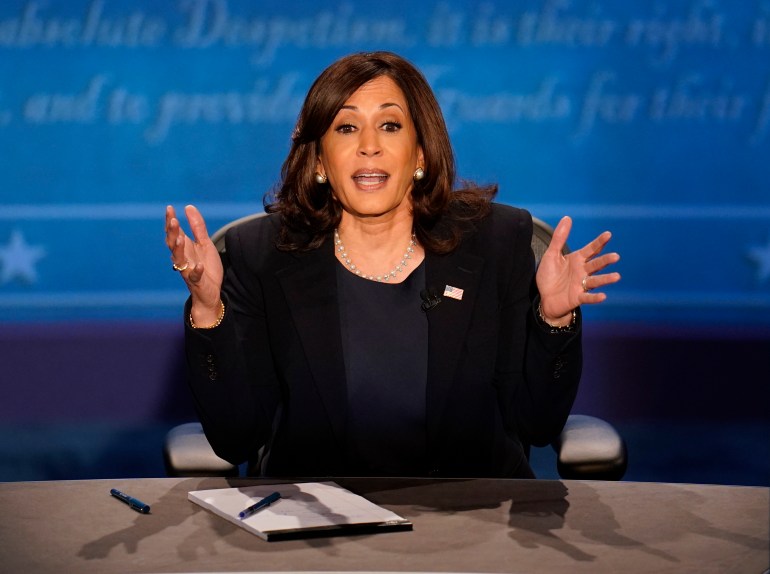 Democratic vice presidential candidate Kamala Harris attacked the Trump administration’s handling of the coronavirus pandemic as an historic failure in her opening remarks in the debate with Vice President Mike Pence [Julio Cortez/AP Photo]
“Well, the American people have witnessed what is the greatest failure of any presidential administration in the history of our country,” Harris said.

Pence appeared agitated as Harris spoke and she turned directly to the camera to address the viewers, saying: “They knew what was happening and they didn’t tell you.”

“Frankly, this administration has forfeited their right to re-election based on this,” Harris said in closing her opening salvo.

It was devastatingly on point, analysts said.

“She was courteous, tough and pointed,” said Nichola Gutgold, a professor of communications at Penn State University. “She entered confident, smiling and relaxed. Her first utterance was very strong.”

Polls indicate the coronavirus pandemic and its effect on the US economy are the top concern for most Americans in the upcoming election. A growing majority of voters say they are dissatisfied with Trump’s handling of the pandemic.

“The pandemic has been hanging over the entire campaign,” said Michael Traugott, a professor of political science at the University of Michigan.

“It is a metaphor for the competency of this administration,” Traugott told Al Jazeera. 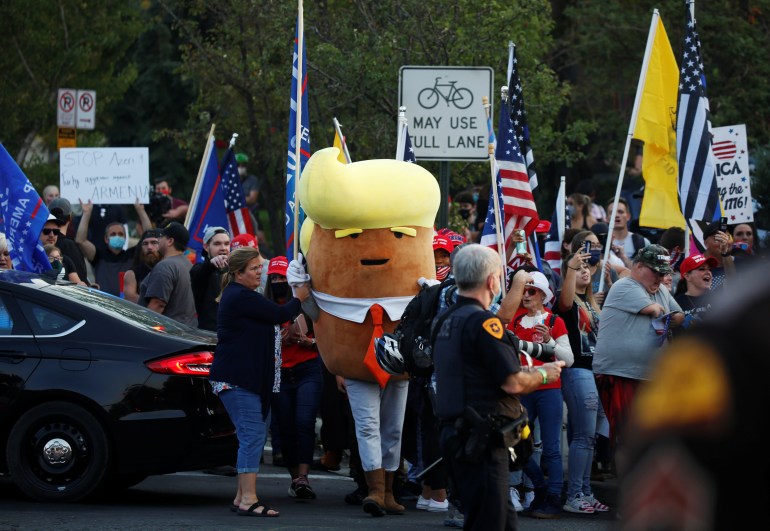 A Trump supporter dressed as a Trump potato croquette outside the 2020 vice presidential debate between Vice President Mike Pence and Democratic vice presidential nominee Senator Kamala Harris [Jim Urquhart/Reuters]
“The fact that he had to go to the hospital, and they haven’t been transparent about his health, it’s creating a crescendo of stories that keep the focus on the overall stakes of this election,” Traugott said.

President Trump, who has refused to wear a protective mask while campaigning and mocked Biden for wearing one, has contracted COVID-19 and was forced to go to Walter Reed military hospital for treatment over the weekend.

He returned to the White House on Monday, professing to feel well and saying he would be back on the campaign trail soon.

The episode has been a major setback for the president. His campaign had been trying to redirect the dialogue to Trump’s success in pushing the stock market up amid a reopening of the US economy, and claiming that Biden would wreck the economy by raising taxes and implementing “socialist” health care and energy policies. 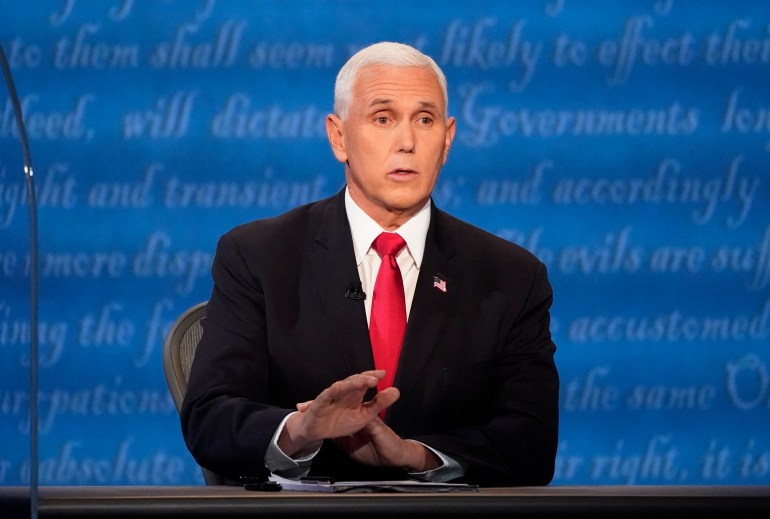 Vice President Mike Pence spent most of his time in Wednesday’s debate in Salt Lake City avoiding direct questions from the moderator and turning to rebut Senator Kamala Harris’s attacks [Julio Cortez/AP Photo]
Pence, who chairs the Trump administration’s Coronavirus Task Force, was immediately put on the spot by moderator Susan Page, the political editor of the USA Today newspaper.

“Why is the US death toll as a percentage of our population higher than that of almost every other wealthy country?” Page asked.

Pence launched into a defence of the administration’s response, claiming it has been “the greatest national mobilisation since World War II” and that it saved hundreds of thousands of lives. He never returned to Page’s question and instead criticised Biden’s plan to address the virus as “plagiarism” of Trump’s plan.

Indeed, Pence throughout the debate found himself frequently pivoting to rebut Harris’ attacks on the Trump administration and flipping Page’s questions to more advantageous ground.

“While the avoidance of answers was to be expected at some level, the number of pain points for the Republicans, the questions that Pence didn’t answer were very important,” Traugott observed. 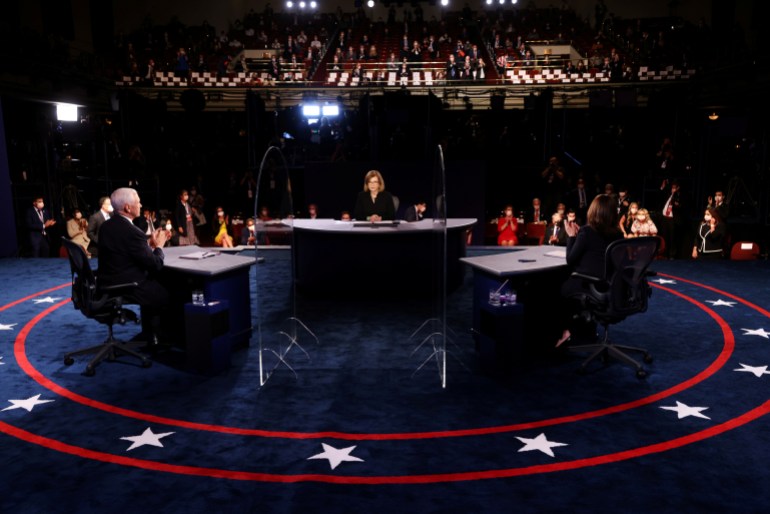 Pence and Harris were separated by plexiglass and the audience was limited to 60 attendees to minimise potential spread of the coronavirus at the debate on the campus of the University of Utah in Salt Lake City [Justin Sullivan/Pool via Reuters]
By Traugott’s scorecard, Pence dodged questions on pre-existing conditions in health insurance, the problem of systemic racism in the US, a question about abortion in Indiana, and whether Trump would agree to a peaceful transfer of power if he loses the election.

At this late stage in the campaign, voters of both parties are likely to say their candidate did well in the debate, said Samara Klar, a political scientist at the University of Arizona.

“Democrats and Republicans will likely both give their vice-presidential candidates strong grades for their performance, although both candidates had some awkward moments,” Klar told Al Jazeera, adding “Pence clearly struggled” and Harris had some “not-so-deft” moments.

Harris failed to answer a question from Pence about whether Democrats would seek to stack the Supreme Court after the election by passing legislation to add more justices to the nine-member panel.

But it may have also been one of Harris’s more effective moments in the debate, according to Kelly Dittmar, a professor of political science at Rutgers University.

“She flipped this attack to point out the court-packing of the Trump administration, pointing out that they have appointed no Black judges to the federal bench and then spoke about how the Biden-Harris administration would value diversity,” Dittmar told Al Jazeera. 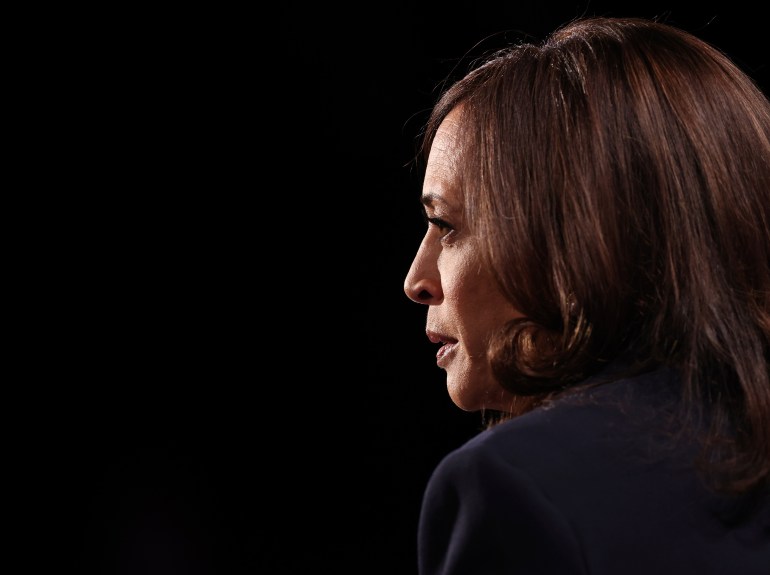 Democratic vice presidential candidate Kamala Harris, whose father came from Jamaica and mother from India, offered an appeal in Wednesday’s debate with Pence for racial justice in the US [Justin Sullivan/Pool via AP]“This is a key point of contrast and one that reaffirms accusations that the Trump-Pence administration is racist,” Dittmar said.

Indeed, the historic nature of the debate – with Harris the first woman of colour on a presidential ticket – cannot be overlooked.

Her match-up against a conservative white man in Pence served a visual reminder of the racial divide the US has struggled with in protests and riots earlier this year.

“She brings lived experiences to the debate that are different from Pence and the many White men who came before her,” Dittmar said. 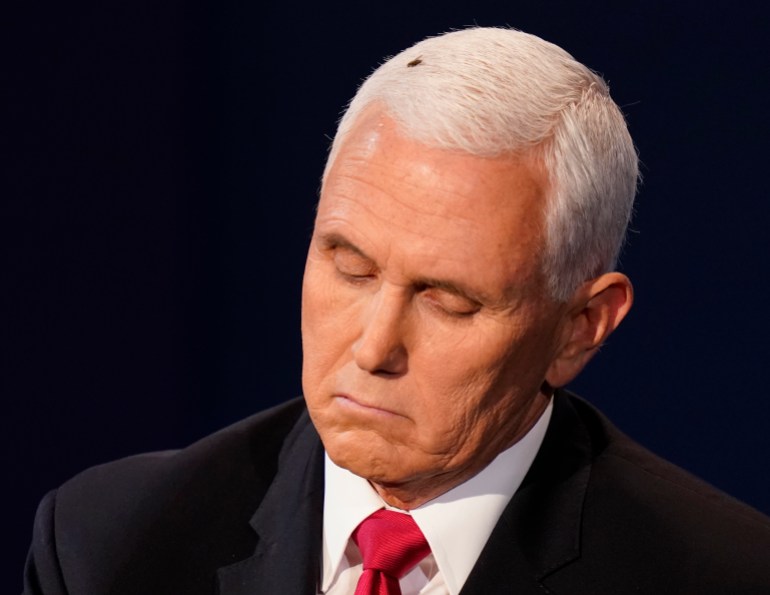