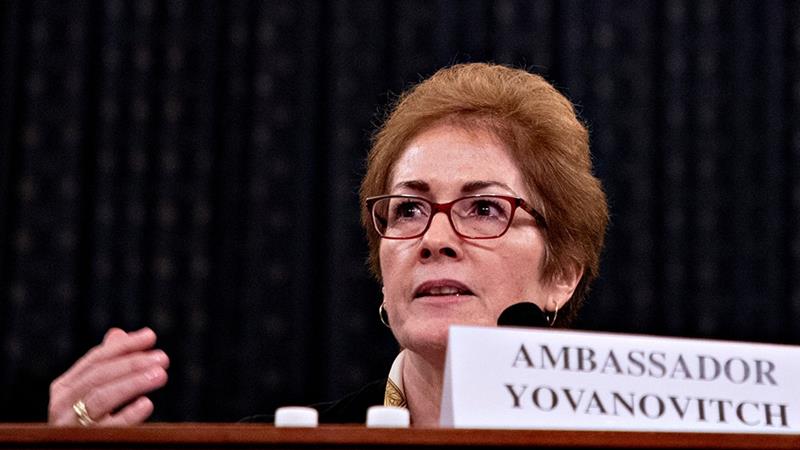 US President Donald Trump launched a Twitter attack on a former US ambassador to Ukraine on Friday while she was testifying to an impeachment hearing in Congress, in an extraordinary moment that Democrats said amounted to witness intimidation – a label Trump and Republicans rejected.

Trump blasted Marie Yovanovitch, a career diplomat, as she explained to the second day of televised impeachment hearings how she had fought corruption in Ukraine and how the Trump administration abruptly removed from her post earlier this year.

Democrats say Yovanovitch was pulled back to Washington, DC, to clear the way for Trump allies to persuade Ukraine to launch corruption probes into Democratic presidential contender Joe Biden and his son Hunter, who was on the board of a Ukrainian energy company.

Trump’s pressure on Ukraine is at the heart of the Democratic-led impeachment inquiry into whether the Republican president misused US foreign policy to undermine one of his potential opponents in the 2020 election.

“Everywhere Marie Yovanovitch went turned bad. She started off in Somalia, how did that go?” Trump asked. 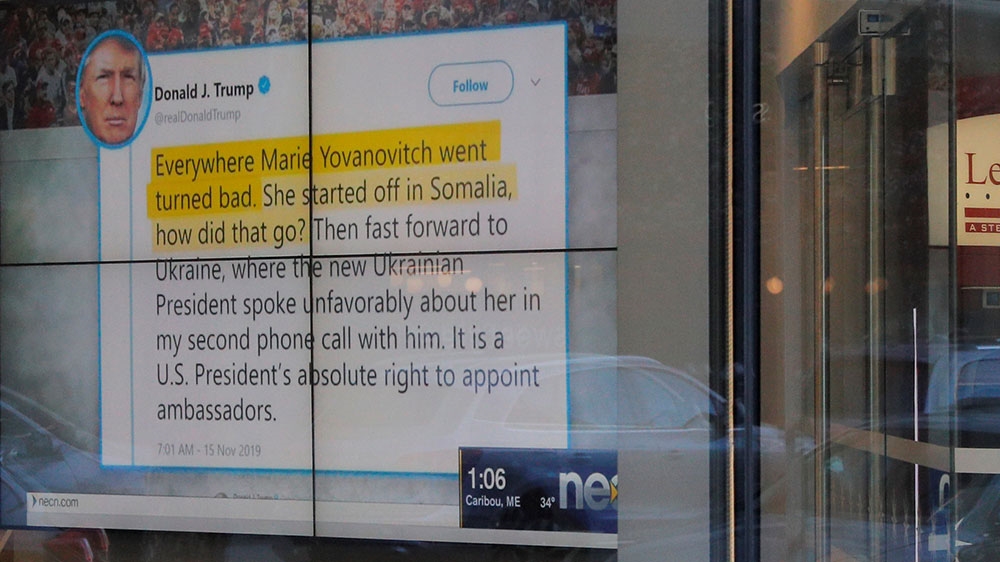 In the most dramatic moment of the impeachment hearings that began on Wednesday, Adam Schiff, the Democrat chairing the hearing in the House Intelligence Committee, asked Yovanovitch for her reaction to the tweet. She said it was “very intimidating”.

“I can’t speak to what the president is trying to do, but I think the effect is to be intimidating,” she said.

Schiff replied: “Well, I want to let you know, ambassador, that some of us here take witness intimidation very, very seriously.” 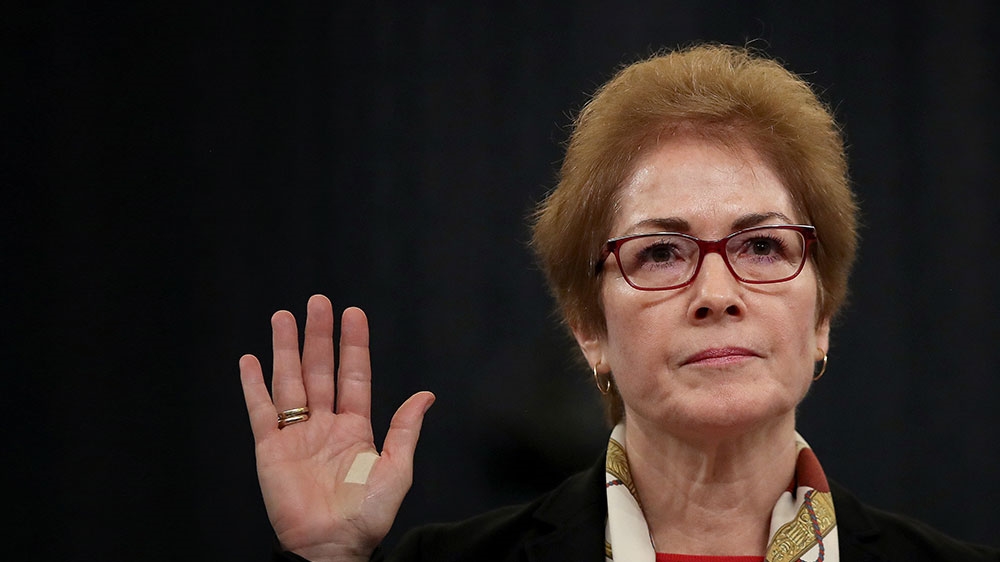 Afterwards, Democratic Representative Eric Swalwell, a member of the committee, told reporters the Trump attack could be considered for a separate article of impeachment against Trump for obstruction of justice.

“It’s evidence of more obstruction: intimidating, tampering with the witness’s testimony. But it really goes to guilt, his knowledge of what he did,” Swalwell said. “Innocent people just don’t do this.”

‘I have the right to speak’

At the White House, Trump told reporters he did not think his tweets were intimidating.

“I have the right to speak. I have freedom of speech just as other people do,” Trump said.

“The witness is testifying. She wouldn’t even have known about the quote if Mr Schiff hadn’t read the tweet,” he said.

Yovanovitch was removed from her post as ambassador to Kyiv in May after coming under attack by Trump’s personal lawyer, Rudy Giuliani, at a time when he was working to persuade Ukraine to carry out an investigation into former Vice President Joe Biden and his son, Hunter, who served on the board of a Ukrainian gas company.

Giuliani also was trying to engineer a Ukrainian investigation into a debunked conspiracy theory embraced by some Trump allies that Ukraine, not Russia, interfered in the 2016 US election. 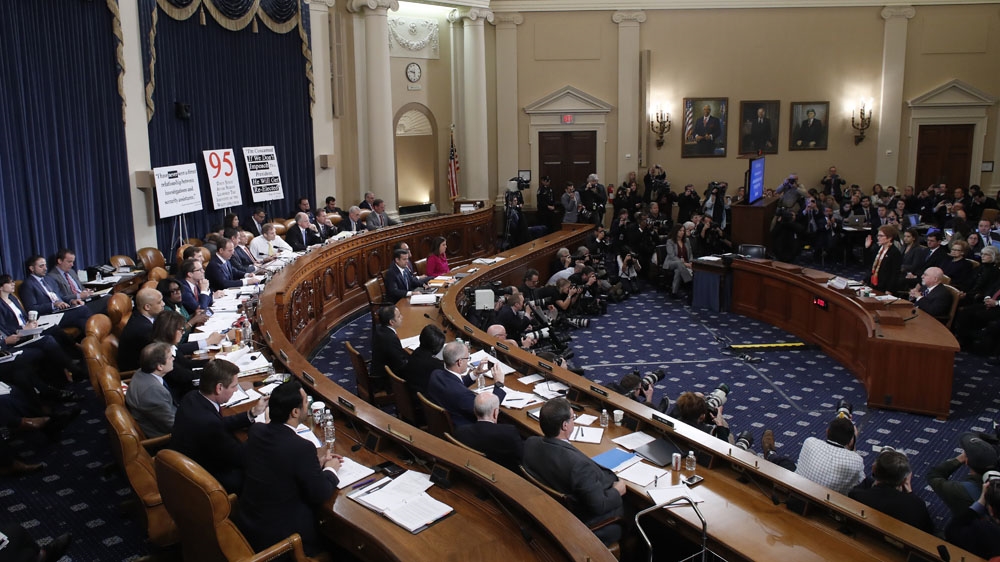 The main focus of the impeachment inquiry is a July 25 phone call in which Trump asked Ukrainian President Volodymyr Zelenskyy, who was elected in May, to open the investigations.

Democrats are looking into whether Trump abused his power by withholding $391m in US security aid to Ukraine as leverage to pressure Kyiv to investigate Joe Biden, who is also a leading contender for the Democratic nomination to take on Trump in the 2020 election.

The money, approved by the US Congress to help US ally Ukraine combat Russia-backed separatists, was later provided to Ukraine.

The hearings could pave the way for the Democratic-led House to approve articles of impeachment – formal charges – against Trump. That would lead to a trial in the Senate on whether to convict Trump and remove him from office. Republicans control the Senate and have shown little support for Trump’s removal.

Many Republicans in Congress say Trump’s actions regarding Ukraine are not impeachable offences, and the president denies any wrongdoing. Republicans have offered no evidence of corruption by former vice president Biden or his son.

Yovanovitch said that her removal had undercut confidence in the US diplomatic corps.

“I had no agenda other than to pursue our stated foreign policy goals,” she said. “I still find it difficult to comprehend that foreign and private interests were able to undermine US interests in this way.” 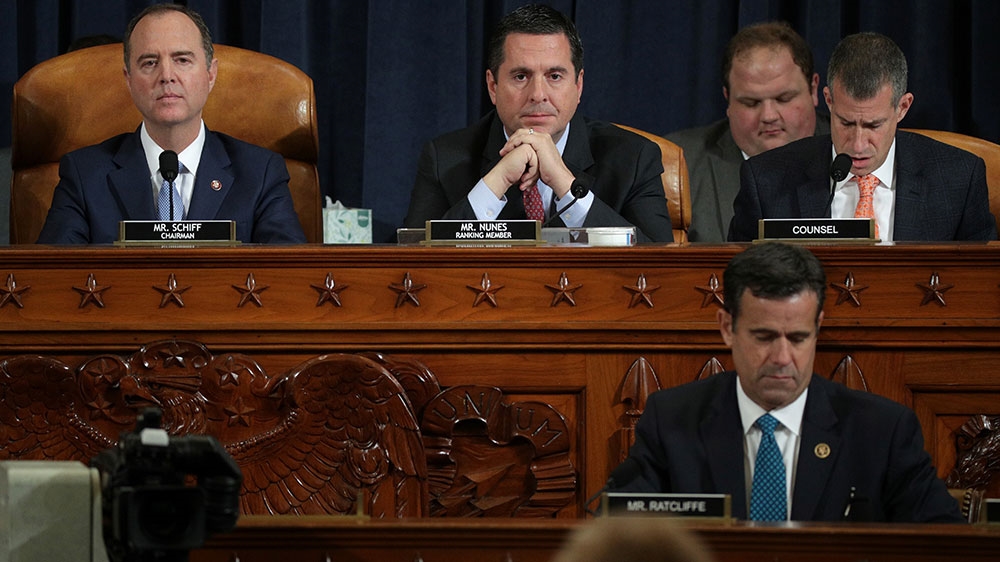 At the opening of the hearing, Republican Devin Nunes criticised Democrats for launching the impeachment inquiry, calling it a political exercise based on second- and third-hand hearsay. He noted Yovanovitch was not involved in Trump’s July 25 phone call, or deliberations on the pause in security aid for Ukraine.

“I’m not exactly sure what the ambassador is doing here today,” Nunes said. “This is the House Intelligence Committee that’s now turned into the House impeachment committee.”

During their questioning, Republicans on the panel praised Yovanovitch for her long career of foreign service, a characterization at odds with Trump’s description of her as “bad news” in the call with Ukraine’s president.

Some people in the hearing room applauded when Yovanovitch’s testimony ended after more than four hours.

Two other US diplomats, William Taylor and George Kent, testified on Wednesday in the first public hearing, expressing alarm over the pressure tactics on Ukraine by Giuliani.

Taylor is acting US ambassador to Ukraine. His aide David Holmes, who Taylor said overheard a July 26 telephone conversation in which Trump asked about progress in getting the Ukrainians to launch the investigations, is due to appear before politicians in a private session later on Friday.
families.

More public hearings are scheduled for next week.