Presidents from both parties have followed tightly restricted procedures that conform to the Presidential Records Act of 1978, which was enacted after Watergate. 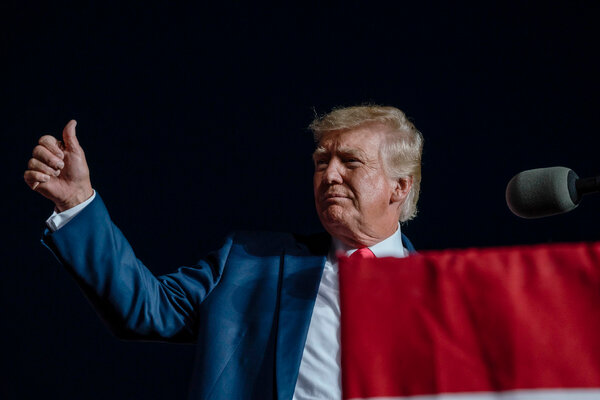 WASHINGTON — For the three years that former President Barack Obama wrote his 768-page memoir after leaving the White House, the millions of pages of his official presidential records were locked away in warehouses in Washington and Chicago.

Each time Mr. Obama wanted to review something, his aides submitted precise requests to the National Archives and Records Administration. Sometimes, documents would be encrypted and loaded onto a laptop that would be brought to Mr. Obama at his office in Washington. Other times, a paper document would be placed in a locked bag for his perusal, and later returned the same way.

The tightly restricted process that Mr. Obama followed to gain access to the 30 million records from his presidency stands in stark contrast to former President Donald J. Trump’s seemingly haphazard handling of some of the government’s most sensitive documents after he left office in early 2021. People familiar with the actions of other recent presidents from both parties described similar, librarylike procedures to see documents, conforming to rules set out in the Presidential Records Act, which was passed in 1978.

The difference underscores how rare it is for one of the country’s recent presidents to flout the rules about presidential records. And it helps to put into a broader context the F.B.I.’s decision to search Mr. Trump’s estate in Florida after concluding that the former president had taken thousands of documents, including some that were classified as top secret.

Aides to Mr. Trump have recounted his chaotic last days in the White House in 2021, as the president and some of his allies tried in vain to cling to power. They said boxes of documents were frantically assembled in the dining room outside the Oval Office and in Mr. Trump’s personal residence in the main White House building, even as the country reeled from the Jan. 6 assault on the Capitol.

Much of the presidential archive is transferred digitally, which makes it all the more striking that Mr. Trump appears to have taken so many paper documents. Historians and White House officials described a methodical process used by presidential staff members to keep track of who produces digital documents so that they can be archived.

People who work in the White House are generally required to use phones and laptops issued by the administration, to make archiving easier. And work performed on personal or home computers must be printed out or forwarded so that it can be cataloged and sent to the archives when the president leaves.

It is unclear how many of the last-minute boxes that Mr. Trump and his aides packed up were turned over to the archives. But according to federal officials, dozens of boxes of documents ended up in the former president’s custody.

That is not the way it’s supposed to happen.

“At 12:01 on Jan. 20, those documents become property of the United States government,” said Lee White, the executive director of the National Coalition for History.

People familiar with the departures of Mr. Obama, a Democrat, and former Presidents George W. Bush, a Republican, and Bill Clinton, a Democrat, said the process of identifying presidential records and sending them to the archives begins months, if not years, before a president leaves the White House for the final time at noon on Jan. 20.

In Mr. Obama’s case, the process involved the transfer of millions of digital files from White House systems to the archives. That began months before the president ended his second term, and was done without the direct involvement of Mr. Obama, according to a person familiar with the procedures.

More on the F.B.I. Search of Mar-a-Lago and Other Trump Investigations

According to the archives, “the Obama Presidential Library has the largest set of electronic holdings in the presidential library system, with approximately 250 terabytes of data including approximately 300 million email messages.”