WASHINGTON — President Trump berated his own cabinet on Thursday for not prosecuting or implicating his political enemies, lashing out amid a cascade of daunting poll numbers and a bout with the coronavirus that has locked him in the White House just weeks before the election.

In his first extended public comments since learning he had the virus last week, Mr. Trump balked at participating in holding the next debate with his Democratic challenger, former Vice President Joseph R. Biden Jr., remotely for health reasons and called Senator Kamala Harris, Mr. Biden’s running mate, a “monster” and a “communist.”

The president castigated his own team, as well, declaring that Attorney General William P. Barr would go down in history “as a very sad, sad situation” if he does not indict Democrats like Mr. Biden and former President Barack Obama. He complained that Secretary of State Mike Pompeo had not released Hillary Clinton’s emails, saying, “I’m not happy about him for that reason.” And he targeted Christopher A. Wray, the F.B.I. director. “He’s been disappointing,” Mr. Trump said.

The pressure on his top administration officials to take action came as Mr. Trump bristled at the restraints of his illness. By the end of the day, he had secured a statement from the White House physician, Dr. Sean P. Conley, reporting that Mr. Trump “has responded extremely well to treatment” and that by Saturday, “I fully expect the president’s return to public engagement.” The Trump campaign then used that statement to argue for the next debate to be held in person next Thursday in Miami as originally planned.

The president’s comments in an hourlong telephone interview with Fox Business in the morning came during what even for him was a scattershot performance, one that advisers said reflected increasing frustration over his political fortunes only 26 days before an election with surveys that show him trailing Mr. Biden by double digits.

He was all over the map, throwing out unsubstantiated or discredited accusations, explaining that he wanted to bring home troops from Afghanistan to be ready to fight China or Russia if necessary and calling Gov. Gretchen Whitmer of Michigan “the lockup queen” even as his own Justice Department was announcing the existence of an anti-government group’s plot to kidnap her.

As for his opponents, he said that Mr. Biden “wouldn’t be president for two months” because “he’s not mentally capable,” leaving Ms. Harris to then take over the presidency. “She’s a communist,” he said. “We’re going to have a communist.” A few hours later, Mr. Trump reposted Twitter messages claiming that Speaker Nancy Pelosi might be orchestrating “a coup” against him. 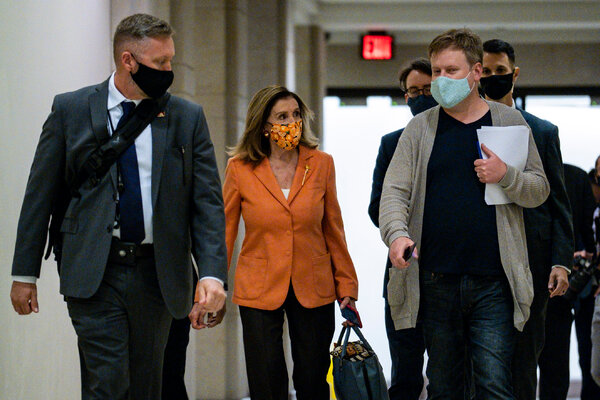 But it was his assault on his own appointees that hinted at the escalating imperative to change the course of a campaign that has defied his efforts to shape it for months, what amounted to a plea for an October surprise.

Mr. Trump has often argued that his political antagonists should be prosecuted, but in this case, he went further by indicating that he had directly pressured Mr. Barr to indict without waiting for more evidence. “He’s got all the information he needs,” the president said. “They want to get more, more, more, they keep getting more. I said, ‘You don’t need any more.’”

Even as he sought to reassert himself on the public stage after a week in the hospital and in the White House infected with the coronavirus, Mr. Trump brushed off the disease, saying that “when you catch it, you get better,” ignoring the more than 212,000 people who have died from it in the United States. He even seemed to suggest he may have been infected by the Gold Star parents of soldiers killed in battle at an event honoring them last month at the White House, although a spokesman later denied he meant that.

Fellow Republicans exhibited increasing frustration with the president’s casual approach to the virus that has now infected not just himself and the first lady but two dozen other high-ranking officials, campaign aides, advisers and Republican senators who attended White House events. Senator Mitch McConnell of Kentucky, the majority leader, even indicated that he was boycotting the White House because of its lax handling of the virus.

“I haven’t actually been to the White House since August the 6th because my impression was that their approach to how to handle this is different from mine and what I suggested that we do in the Senate, which is to wear a mask and practice social distancing,” Mr. McConnell told reporters.

After being rebuffed by the White House, the Washington city government’s health department released an open letter to the staff members and guests who attended a Sept. 26 ceremony there, which has been blamed for the outbreak, imploring them to get tested for the virus. Crede Bailey, the head of the White House security office, has been hospitalized and a fourth White House journalist tested positive on Thursday.

Ms. Pelosi said she planned to introduce legislation on Friday creating a commission on presidential capacity to review the health of a commander in chief under provisions of the 25th Amendment providing for the temporary transfer of power to the vice president in case of inability to discharge the duties of the office. “Crazy Nancy is the one who should be under observation,” Mr. Trump replied on Twitter.

Senator Mitch McConnell said he had not been to the White House since August.

Well, I’ve been following, following the advice of the C.D.C. and the Capitol physician. I can tell you, I haven’t been to the White House since Aug. 6. And I personally didn’t feel that they were approaching protection from this illness in the same way that I thought was appropriate for the Senate. And the Senate has been operating in a way that I think has largely prevented contraction of this disease. 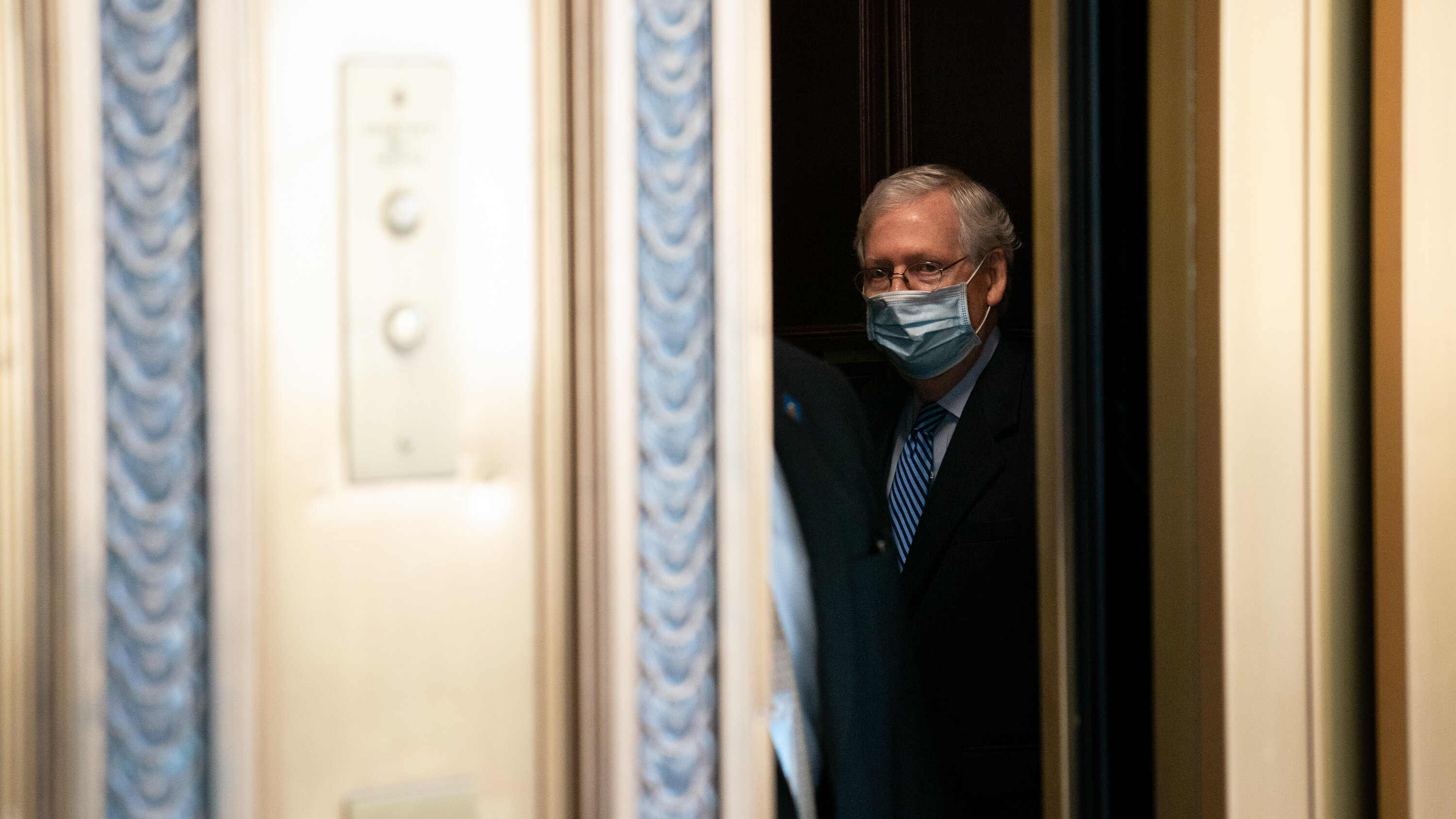 The president’s phone interview with Maria Bartiromo of Fox Business was his first time answering questions since he was infected with the virus and flown to the Walter Reed National Military Medical Center, where he stayed for three nights. He insisted that he had recovered and was no longer taking the experimental drugs used to treat the virus, but that he was still taking a steroid that doctors say can produce bursts of energy, euphoria and even a sense of invulnerability.

“I felt pretty lousy,” Mr. Trump said. But, he added, “I’m back because I’m a perfect physical specimen and I’m extremely young.” He once again played down the severity of the disease. “Now what happens is you get better,” he said. “That’s what happens, you get better.”

Mr. Trump later released a video addressed specifically to senior citizens, who were once his political base but have increasingly soured on him as they have been disproportionately affected by the pandemic, according to polls.

“To my favorite people in the world, the seniors,” he said in the video. “I’m a senior. I know you don’t know that. Nobody knows that. Maybe you don’t have to tell them. But I’m a senior.”

In the video, Mr. Trump was shown on the South Lawn of the White House hundreds of feet away from the mansion, but it appeared to be a digital backdrop as leaves blowing in the wind behind him could be seen repeating on a loop. Judd Deere, a White House spokesman, insisted that “he was definitely outside.” Mr. Trump has not appeared before news cameras since his return from Walter Reed on Monday evening.

White House aides privately expressed concern about whether the president’s animated mood in recent days stemmed from the dexamethasone steroid he is on. Doctors not involved with the president’s care said it could have a significant effect on a patient’s behavior.

Dr. Negin Hajizadeh, a pulmonary/critical care physician at Northwell Health, noted that the majority of Covid patients receiving dexamethasone are on mechanical ventilation and in a state of induced coma, so they do not exhibit any behavioral side effects. But, she said, large studies show that generally 28 to 30 percent of patients will exhibit mild to moderate psychiatric side effects like anxiety, insomnia, mania or delirium after receiving steroid treatments, and about 6 percent may develop psychosis.

Watching the news coverage and angry at the state of the race, Mr. Trump has been imploring aides to let him resume campaign rallies as soon as this weekend, which now could be possible. He showed up again in the Oval Office on Thursday despite efforts to get him to remain in the residence until he was more fully recovered.

Around the White House and inside the Trump campaign, some advisers are worried. Others are looking at the calendar and arguing that there is still a lot of time left while they realize there are few if any opportunities to change the trajectory of the race. That would be especially true without next week’s debate.

Campaign officials point to the calendar and note that the “Access Hollywood” tape with its sexually offensive banter that was seen as the end of his 2016 candidacy emerged on Oct. 7 that year, roughly the same point in the campaign as now. But something else happened that day that helped distract attention from the tape: the leak of emails stolen by Russia from Mrs. Clinton’s campaign chairman.

Mr. Trump appeared eager for such a bolt of lightning this year as he talked with Ms. Bartiromo on Thursday. He spent a striking amount of time on the four-year-old investigation of Mrs. Clinton’s emails at the same time another 1,000 people died of the coronavirus in the United States on Wednesday and his own White House has become the biggest hot spot in the nation’s capital.

Alex Conant, a Republican strategist and former aide to Senator Marco Rubio of Florida, said that the Trump campaign was entering a dangerous window, suggesting that a campaign heading for a possible defeat becomes treacherous.

“The knives come out, the donors flee and the candidate throws embarrassing Hail Marys,” he said. “Most politicians can handle losing a race, but they really don’t want to be embarrassed. When a loss seems inevitable, people who want a future in politics start looking out for their own interests. People start looking over their shoulders.”