Outside the Trump bubble, the president is fact-checked, scorned, doubted or challenged. His words — and there are many of them most days — appear to have lost their ability to persuade moderates and independents. To his critics, Mr. Trump is a liar and a fraud who is cheapening the office he holds and threatening the fabric of the nation’s democracy.

But inside the bubble, it is different. Inside, supporters share Mr. Trump’s view that men are the aggrieved gender. Inside, they vent their fury at Democrats and the news media using the president’s incendiary language. Inside, they harbor Mr. Trump’s conspiracy theories and echo his dark fear of immigrants.

Like Mr. Trump, the president’s most fervent supporters are not swayed by facts they consider inconvenient. Mr. Trump tells them the economy is the best the country has ever had, and they believe him, even if their communities are still struggling. The attacks on Mr. Trump only reinforce what they believe: He is on their side, no matter what.

In dozens of interviews with Republican voters at 11 rallies across eight states, one thing is clear: The country is no longer divided into Red America and Blue America. It is cleaved cleanly between two realities — Trump’s America and everyone else.

Fears of a Migrant Invasion

At rallies in West Virginia, Florida and Montana — each far from the Mexican border — Trump’s supporters almost universally cited the northward march of a Central American caravan as their top reason for voting. Like the president they came to see, most expressed anger at “illegal aliens,” unfounded suspicions about the Jewish billionaire they believe is funding the caravan and a fierce determination to support a military blockade to keep foreigners out of the United States.

Brandon Baker, 45, the manager of a big-box retailer from Santa Rosa County, Fla.

He says what we all feel, and he was able to take a stand for us, and we appreciate it. Immigration is the biggest one. Living in Florida, we’re close enough to some of the borders. Off Interstate 10, it’s easy for someone to make it into our area, and we just need them to not. Security absolutely is my top concern with it. I think we should close the border or make them earn their chance to come in. They need to go through the process the right way.

Attended the rally in Pensacola, Fla. 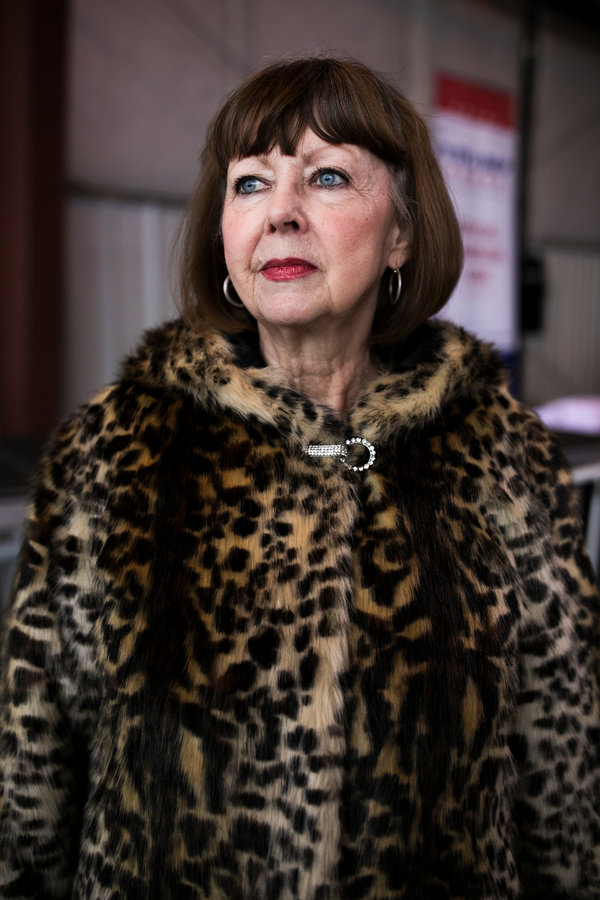 I don’t think they ought to let them flood our country. To bring people like that in is fine if they come in legally, but when they come in illegally, holding foreign flags, waving them in the air. They don’t want asylum. They are coming in, they are invading our country. Come in the right way. I don’t know who was behind all this. But it’s funny when you see these people in designer tennis shoes, you know, athletic shoes.

I can’t really say that anything he says is true, but I trust him. And I absolutely 100 percent agree that we need stronger borders. Coming from a Mexican family myself, people can’t just barge in. Even if they’re seeking asylum, they need to do it the right way. I don’t think it’s safe to have anyone come in that we know nothing about. It doesn’t make us racist. We just want to protect our home.

Attended the rally in Belgrade, Mont.

I don’t see it as a military threat or a physical threat to our country, but I think that it’s more of a statement so that it doesn’t continue. I think that he feels that if this caravan comes across, the next one will form behind it, and the next one behind it, so it’s a form of saying, “Hey, we need to vet folks who come here.” It’s a deterrent — a show of force.

Hopes, at Least, of an Economic Recovery

Many of the president’s recent rallies have been held in economically struggling communities, which have lagged behind the nation’s recovery. But the Trump supporters see something else: a new hope that they attribute directly to the president. And they fear that Democratic victories on Tuesday would mean an end to the better life they say they are experiencing.

We’ve got to get rid of a lot of corruption that’s within our government as it is. We cannot allow the liberal mind-set to take over. The economy, for one. It’s better than it’s been for years. If they come in, they want to raise the taxes and they want to increase the regulations like they had before. They want to cause our economy to hit the dumps.

I went from being a security guard to back as a mechanic when our new dealership opened up that I got a job at. Not just myself but my father. He’s the service manager. So he’s my boss actually.

Attended the rally in Belgrade

I’ve seen my business skyrocket over the last two years. I sell real estate to second- or third-time buyers, so it’s a luxury purchase. People only purchase at the ranch if their businesses are doing well. So if we’re doing well it’s a good indicator.

Attended the rally in Belgrade

Things are changing in the construction industry. People are working. They reopened a coal mine that was shut down in the past month or so. I don’t think the coal industry is ever going to be what it was. But this state thrives on coal. I just believe the president is actually not part of what went on for 75 years in the United States. I believe he has some fresh ideas and is good for America at this time.

Rage About Democrats and the News Media

Even before the president arrives at the rallies and points out the “fake news” in the back, Mr. Trump’s supporters are primed to erupt in angry boos. They believe that the news media is biased and unfair, and are eager to say so. And they lump the news media together with Democrats, using Mr. Trump’s language to describe them: evil, socialists, dangerous.

For years, Democrats were in office. How many Republican riots were done? How many Democrats were beat up? How many Democrats were run out of restaurants because they were Democrats? No. What’s happening now? A Republican congressperson can’t even go eat a dinner without people — I mean, if that’s not just crazy. If that’s not indoctrination. These people are doing it just because Nancy Pelosi or Maxine Waters said go do it. They’re calling us the violent people. Their own people advocate violence and bullying. It’s crazy. People can’t even carry a Trump sign down the street that somebody doesn’t rip it out of their hands and tear it up.

Attended the rally in Columbia, Mo.

I don’t even look at fact checks. I think it lies, too. I mean, truthfully, the media has done nothing but lie. They are socialist and the mainstream media is out there to take him down just like the Democrats. I don’t watch CNN. I don’t watch any of it. I listened to him in Charleston, W.Va. He said if they do not keep control, he said — in the Senate and the House — he said we are going to be one big sanctuary city and we’re going to be just like Venezuela, people eating out of garbage cans. I don’t particularly want to eat out of a garbage can.

The presidency is always something of a cult of personality. We build up our presidents (only to, sometimes, tear them down). But Mr. Trump has taken it further. To his supporters, he can do no wrong, regardless of his willingness to mangle the truth, make racially charged statements, ignore diplomatic traditions and viciously attack his adversaries. His supporters say they either ignore his foibles or see them as reasonable responses to unfair attacks. Many of his supporters say he should not be judged by the standards of other politicians because, in their minds, he is not one.

He’s completely cut from a different cloth than the politicians. He’s not a politician, he’s a businessman. For all my life, I’ve been watching boobs get in there — Republicans, Democrats, whatever — they all do the same crap. It don’t do us any good. This guy is. He’s gotten the economy roaring again, he’s gotten the armed forces back up to speed, he’s got at least the Republican part of this nation in really good health and really involved. Well, he’s gotten the Democrats involved as well, but maybe not so much for him!

You can’t trust any career politician. That’s why I love Trump. This is my first political rally. Never wanted to see another president before. He’s just an American that loves his country.

I would prefer if he were more upright in his personal life, but I try to give him a pass.

Attended the rally in Indianapolis

He wants to allow people to raise their kids according to their Christian or religious values. He was a hedonistic playboy, but that was a long time ago and I have to say, I appreciate the change. He’s not that person anymore. I was ambivalent at first, but then I looked at the choices and then I decided to support him, and I’m not sorry at all. I’m very happy about it. What he has done is make people respect America because I felt like we got pushed around a lot. People just assumed that Americans were there, taken for granted, and I think he’s finally making people respect us.

Michael D. Shear is a White House correspondent. He previously worked at The Washington Post and was a member of their Pulitzer Prize-winning team that covered the Virginia Tech shootings in 2007. @shearm