The sight of a violent mob inspired by President Trump smashing its way into the Capitol was more than just a shocking spectacle. It also highlighted one of the most dangerous parts of Mr. Trump’s legacy: the disbelief in democracy that has metastasized among many of his supporters.

While the turmoil on Wednesday has divided Republican officials, with some resigning or calling for Mr. Trump to leave office and others rallying behind him, there are few signs of division among these voters who fervently back Mr. Trump. In lengthy interviews with some of them this week, they expressed sympathy with what they said were the motives of the mob — to stop the counting of Electoral College results in Congress, under the false premise that widespread fraud had deprived the president of re-election.

The adherence of Mr. Trump’s base to his groundless claims of a “sacred landslide” victory, and their rejection of a routine Constitutional process — a position abetted by 147 Congressional Republicans who objected to certifying Mr. Biden’s election — suggests that a core part of the Republican Party, both voters and some officials, is dead-set on rejecting the legitimacy of any politics or party but their own. 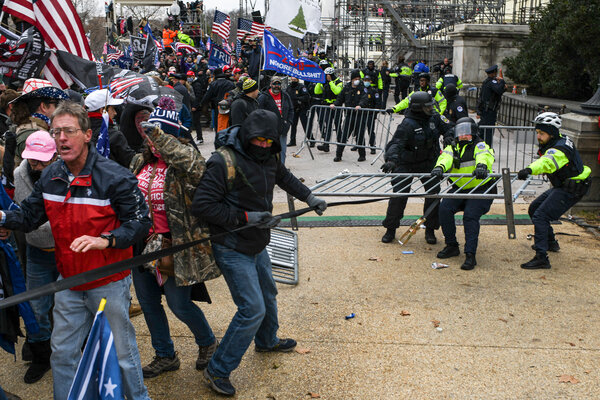 “Yes, they’re raising Cain,’’ Candy Grossi, a grandmother in Georgia, said of her fellow Trump supporters as rioters breached the Capitol on Wednesday, offering a running commentary on what she was seeing on television.

“We are fed up. There are so many people fed up with how crooked it is,” she said. “I really don’t have respect for our Congress anymore. They deep-sixed the president. It’s the first time in history I’ve seen one’s own party treat their president the way they did — it’s shameful.’’

Ms. Grossi, 65, a retired apartment manager and a self-published author, said she did not condone the violence in the Capitol, which left an officer and a rioter dead. But she shared the mob’s rage over what she, and they, falsely called a stolen election, and their powerlessness to stop the presidency of Joseph R. Biden Jr.

“People are tired,’’ she said. “It doesn’t seem to matter what we do."

In the interviews, Trump supporters adamantly clung to what they called evidence of a fraudulent election, engaged in so-called whataboutism to play down the scenes of destruction in Washington and accused the news media of being overly melodramatic in describing events as a historic inflection.

Mitchell Hoyt, a Trump voter in Wisconsin, objected when a reporter referred to the “storming” of the Capitol.

“The people didn’t show up with guns trying to overthrow the government, but the media likes to spin it that way,’’ he said. Though he said he believed the break-in and vandalism at the Capitol were “not a good representation of conservatism in this country,” he added: “I don’t think those people should be demonized. They’re angry and when people don’t think they have a voice that can be heard, stuff like this happens.”

Mr. Hoyt, a commercial producer of maple syrup in northern Wisconsin, claimed the mainstream news media and the left used a double standard in what he called uncritical coverage last year of the protests over police killings of Black Americans that included episodes of burning and looting.

“It’s not palatable,’’ he said. “People are not going to accept it.”

Since Mr. Trump first ran for president more than five years ago, his critics have been predicting that one or another of his norm-shattering acts would send droves of his supporters fleeing. It has never happened. The interviews with Trump voters suggest that even his assault on the most bedrock norm of American democracy — the peaceful transition of power — may still not bring about mass defections.

For these voters, the lack of allegiance to small “d” democratic values seemed to stem, in part, from the shift among many Republicans to imbibing information from sources that offer propaganda rather than news and facts. The share of Republicans who trust the mass media has plunged in the Trump years to 10 percent, according to Gallup. A majority of Republicans believe Mr. Trump was robbed of the election.

Mr. Hoyt praised The Epoch Times, a leading purveyor of right-wing misinformation, because “they just give you the facts of what’s happening.” For Ms. Grossi, One America News Network, the far-right channel that spreads conspiracies, is the only information source she trusts. She also follows QAnon, the baseless conspiracy movement that links top Democrats to child sex trafficking.

But she is also fed up with most elected Republicans. “All of them were anti-Trump — except for the American public,’’ she said.

On Friday, at Ronald Reagan National Airport in Washington, a group of die-hard Trump supporters yelled “traitor” and “liar” at Senator Lindsey Graham, the South Carolina Republican, for failing to more aggressively back the president’s claims of a rigged election.

Another likely factor that leads to delegitimizing political opponents among Trump supporters is the scorched-earth attacks on Democratic candidates during elections. Most recently, Mr. Biden and his vice-presidential running mate, Kamala Harris, were falsely tied to “socialism” and the most far-left positions on energy policy and health care.

Eileen Lelich, a retired dental assistant in western Pennsylvania, disagreed that the storming of the Capitol was an “insurrection incited by the president,’’ as Senator Mitt Romney of Utah, the 2012 Republican presidential nominee, described it.

“I wouldn’t say that,’’ said Ms. Lelich, who called herself a staunch backer of the president. “The Trump supporters are Trump supporters. They want answers. They want to know what happened” with the election. Despite more than 60 court cases dismissing the president’s claims of fraud or misconduct by election officials, Ms. Lelich did not believe Mr. Biden had won her state. She credulously absorbed the Republican attacks on the Democratic ticket, in which Mr. Biden was portrayed as doddering and Ms. Harris as a left-wing extremist.

“I’m very worried about our world,’’ she added. “I don’t want to go into socialism.’’

Some members of the president’s base said they would view Mr. Biden as illegitimately occupying the Oval Office, a further polarization of Americans after years when some Democrats questioned or denied Mr. Trump’s legitimacy. In the view of many Trump supporters, the president was never given a chance to govern — he was besieged from Day 1 by claims of Russian collusion, fierce obstruction of his priorities and, ultimately, an impeachment.

“If they do get Joe Biden sworn in, I think we’re in for a very turbulent time because I don’t think many people are going to accept it,’’ said Jacob Hanna, a Trump supporter in northeast Pennsylvania. “We had dead people voting, illegal aliens voting, and we’re supposed to sit here and say he’s a legitimate president — it’s just not right.’’

Mr. Hanna, 19, was a poll worker in his rural township not far from Mr. Biden’s birth city of Scranton, and he cannot accept that Mr. Biden won honestly.

“We were swamped, we had over 250 people in line,’’ he said, adding confidently that few were Biden backers. “It’s mind-boggling for me to believe we go to bed 800,000 votes ahead and we wake up, and after these magic ballots dumped overnight, we’re somehow losing.”

Such disinformation, which has spread widely online, has been debunked by election analysts, who explain that mail-in ballots counted more slowly over several days heavily favored Mr. Biden after the president made their use toxic to his supporters.

Robert Fuller of Georgia remained so furious about the election that he foresaw an America casting off from its deepest moorings. “We’ll be lucky if we still have a country left after this,’’ he said, citing false claims of election fraud that the president had ranted about over the weekend on a recorded call to Georgia’s top election official, a Republican.

“I foresee a civil war coming, Republicans against Democrats,’’ Mr. Fuller said. “You know as well as I do they stuffed the ballots in the states of Georgia, Nevada, Arizona and Michigan.”

In Georgia’s Senate runoff elections on Tuesday, Mr. Fuller, 65, supported the Republicans Kelly Loeffler and David Perdue, both of whom lost. The victors — the Rev. Raphael Warnock, who will be the first Black senator from Georgia, and Jon Ossoff, who will be the Senate’s youngest member — secured control of the chamber for Democrats.

Mr. Fuller does not consider either winner legitimate. Not because they didn’t win the most votes, but because of their political views, which were caricatured during the race as far left of center.

“If they were legitimate Democrats it wouldn’t be a problem, but they’re not legitimate,’’ he said. Parroting comments that Mr. Trump made at a rally in Georgia on the eve of the election, he added: “Warnock is a Marxist and Ossoff is a communist, as far as I’m concerned. Might as well let the Chinese take over the country the way things are going.’’