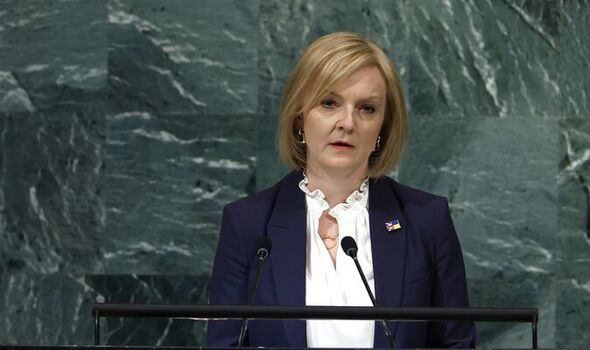 Liz Truss can be the “conservative leader of the free world” a Washington insider has said but warned the UK has become “the new bogeyman for the American woke left”. Nile Gardiner, director of the Margaret Thatcher Center at the Heritage Foundation, said attacks on the Queen after her death in the New York Times “is just the beginning” of an onslaught on Britain.

Mr Gardiner, who previously worked for Margaret Thatcher, made his comments amid reports that Ms Truss has insisted that the term “special relationship” between the UK and US is ditched.

She has also put trade talks between the two countries on the back burner after the Biden administration used it as a means to threaten the UK over the Northern Ireland protocol.

After the Queen’s death earlier this month the New York Times caused outrage by attacking her legacy and claiming she was a colonial figure while also questioning the cost of the state funeral.

The Democrat-supporting newspaper claimed she “helped obscure a bloody history of decolonisation” among other comments branded “inappropriate”.

Speaking to Express.co.uk, Mr Gardiner said: “People in the UK need to understand that this is just the beginning.

“They need to know that the woke American left in the Democrats are coming after Britain because Britain stands for everything that they oppose.”

He noted that the relationship between the UK and US governments is at its “most tense” since the Sue crisis in 1956.

“The problem is that the American woke left identify in Britain many things that they hate.

“They hate British history and tradition, they hate Brexit, now there is a tax cutting government as opposed to a big state one they hate that too.”

He added: “A lot of the toxic woke attacks are now going to come across the Atlantic aimed at the UK and Liz Truss’s government needs to stand up to it.”

Mr Gariner noted that the anti-British sentiment is “a minority view” as is the one against the Royal family.

He said: “Millions of people in the US watched the Queen’s funeral, there was non-stop coverage from most of the main broadcasters.

“To his credit Joe Biden had the flags at half mast on federal buildings for a week.

“People were genuinely moved and both Britain and the Royal family are generally very popular here.”

But he noted that the anti-UK sentiment had its links to the Biden administration.

“Biden’s advisors particularly dislike Brexit and of course, the Irish lobby is very influential when it comes to Northern Ireland.

“They don’t like the idea of countries striking it alone, they want governments which agree with their big state high tax solutions.”

But he said Ms Truss now has a chance to fill the void left by the American leadership.

“She can be the conservative leader of the free world.

“A lot of people are interested in what she has to say and the UK is in a position, now it is free of the EU, to provide some alternative leadership.”