The Conservative leadership frontrunner said it was “important” that consumers can still use notes and coins to pay for goods and services. 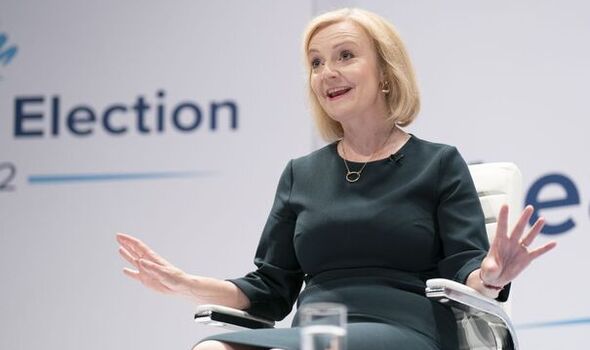 Businesses are increasingly turning towards card only payments following a shift during the pandemic when there were concerns about hygiene. But the cost of living crisis means many people favour hard cash as a way of budgeting.

The Foreign Secretary also told the audience in Northern Ireland that that she will pass the protocol bill “in full”. The legislation will allow the government to tear up parts of the Brexit deal that have inflamed tensions in the region.

Ms Truss said: “The fact is the protocol is undermining the Belfast/Good Friday agreement. It is causing unfairness between the communities and we need to make sure it is fixed.

“I worked hard to get a resolution with the EU on this issue. It wasn’t forthcoming but I’m not somebody who’s prepared to let the situation drift. I am absolutely determined to deliver it in full and to make sure it’s put into place because this is vital for the future of Northern Ireland and for the future of the UK.”

Post-Brexit rules stop Northern Ireland benefiting from some tax changes in the rest of the UK She vowed to make changes so the region “can benefit from the same tax breaks” as the rest of the country. Rival Rishi Sunak said he would restart talks with the EU to secure a swift deal to break the deadlock.

“Of course as a new Prime Minister, in the interim I would seek to talk to Europe and Ireland and the French to see if we can find a negotiated outcome,” he said.

“History shows us even when Europe say they’re not open to changing something they have. A negotiated outcome will be far quicker so it’s worth trying.”

He added: “I think actually both Liz and I are supporting the same Bill that is in Parliament, that we both support and so in that sense there isn’t a difference between us.

“My plan is the same as Liz’s plan, which is to push on and pass the Bill that is in Parliament, and I’m confident that that’s the right way to resolve the situation, and people should be in no doubt that under my premiership that Bill would continue to make its way through Parliament and become law.”

He added: “What’s very clear is that we need to ensure that all strands of the Belfast Good Friday Agreement are respected and at the moment it’s pretty clear that particularly the east-west strand of that agreement and obviously the lack of a functioning executive are not working and that needs resolution.

“I will be privileged and proud to be a prime minister of the entire UK and that means ensuring Northern Ireland’s place in the UK and as is currently being implemented the protocol is not making that possible and it needs to be fixed.”