ARLINGTON, Va. — Georgia has sharply limited voting access, making drop boxes less available and forbidding anyone to hand out water to voters in line. Florida and Texas are poised to advance similar legislation. Alabama’s strict voter identification law is being used as a template elsewhere.

As states across the South race to establish new voting restrictions, Virginia is bolting in the opposite direction. The Democratic governor, Ralph Northam, this week capped a multiyear liberal movement for greater ballot access by signing off on sweeping legislation to recreate pivotal elements of the federal Voting Rights Act that were struck down by the Supreme Court’s conservative majority in 2013.

Alone among the states of the former Confederacy, Virginia has become a voting rights bastion, increasingly encouraging its citizens — especially people of color — to exercise their democratic rights. In the last 14 months, the state’s Democratic-controlled General Assembly and Mr. Northam have together repealed the state’s voter ID law, enacted 45 days of no-excuse absentee voting, made Election Day a state holiday and enacted automatic voter registration for anyone who receives a Virginia driver’s license.

Virginia, which for nearly 50 years had to submit changes to its elections to the federal government for approval under the Voting Rights Act’s preclearance requirements, has now effectively imposed the same covenants on itself, an extraordinary step for a state with a long history of segregation and racially targeted voting laws.

The new law that was approved on Wednesday, called the Voting Rights Act of Virginia, requires all local elections administrators to receive public feedback or advance approval from the state’s attorney general for changes like moving voting precincts or elections registrars’ offices, and allows voters and the attorney general to sue over voter suppression. It expressly prohibits any racial discrimination or intimidation related to voting.

“I have an aunt who marched against the poll tax. My grandparents both had to pay poll taxes,” said Marcia Price, a Democratic state delegate who sponsored the legislation. “Just knowing that they lived under a system that was unfair and unequal, I learned very early that it was wrong, and that it needs to be changed.” 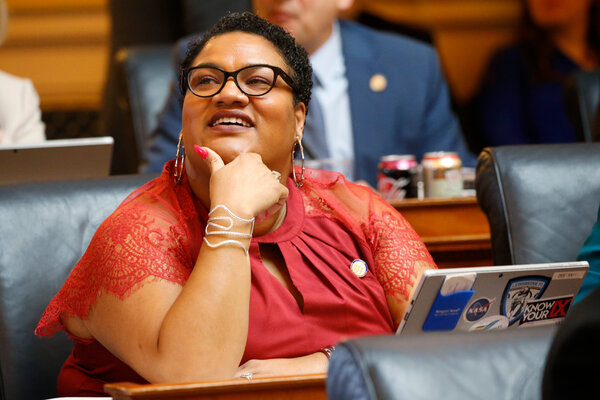 Virginia’s expansion of voting protections comes at a moment when the state has ushered through a raft of progressive legislation unseen in its history. Since the 2019 election, when Democrats won majorities in the General Assembly to give the party full control of state government for the first time since 1993, Virginia has abolished the death penalty; enacted gun control measures long stymied in Washington; introduced an independent redistricting commission; raised the minimum wage to $15 per hour; and allowed local governments to remove Confederate statues, names and emblems that dot the state, which was once home to the capital of the Confederacy.

Republicans’ longtime grip on Virginia politics reached even the state’s most liberal corners. In Arlington, a Democratic stronghold across the Potomac River from Washington, a main highway stretching south from the nation’s capital was named for the Confederacy’s president, Jefferson Davis, for nearly a century until 2019. Under pressure from Mr. Northam, a state board allowed Arlington to change the name.

The state’s voting rights act is being signed into law by a governor whose career was nearly derailed by a blackface scandal in 2019. Since then, Mr. Northam has been at the forefront of a host of the state’s racial justice initiatives and has enjoyed high approval ratings. He said on Wednesday that the Virginia law should become a model for the nation.

“At a time when voting rights are under attack across our country, Virginia is expanding access to the ballot box, not restricting it,” Mr. Northam said. “Our Commonwealth is creating a model for how states can provide comprehensive voter protections that strengthen democracy and the integrity of our elections.”

Virginia’s turn away from its longtime restrictions on voting rights began in 2016, when Gov. Terry McAuliffe restored voting rights to 206,000 felons in the state over the objections of the Republican-led General Assembly and the state’s Supreme Court. After the court ruled that Mr. McAuliffe did not have the authority to restore felon voting rights en masse, but could do so case by case, he sent 206,000 individual voting rights restoration letters to felons, who were sent envelopes with a Virginia voter application form and a self-addressed stamped envelope.

“To me it was a moral, civil rights issue and this was a racist Jim Crow law that needed to be eliminated,” Mr. McAuliffe said on Wednesday.

Once Democrats took full control of state government last year, one of the first bills they passed created one of the longest early-voting periods in the country — a 45-day window for no-excuse absentee voting, in which people can vote remotely without having to provide a rationale. More than 2.8 million Virginians voted early in the 2020 election, nearly five times as many as did so in 2016.

“This is what my ancestors fought hard for,” said Charniele Herring, the author of the early voting bill, who last year became the first Black majority leader in the Virginia House of Delegates. “My parents had to have that struggle in the ’60s, and this is the time to stop that struggle and to protect everybody’s right to vote, no matter their political affiliation.”

Republican state legislators all opposed the Virginia Voting Rights Act, arguing that it would inundate local election administrators with lawsuits and complicate routine changes to voting. Glenn Davis, a Republican delegate from Virginia Beach who is running for lieutenant governor, said it was “simple human nature” that Democrats’ efforts to make voting easier, like eliminating Virginia’s photo identification requirement, would result in more fraud.

“When they said African-Americans are less likely to have IDs and be able to go to the D.M.V. to get an ID, to me that sounds offensive,” said Mr. Davis, who is white. “No one has ever come to me that was not a politician and said, ‘Glenn, I find it more difficult to get an ID.’”

The local preclearance requirement that Mr. Northam approved on Wednesday was sponsored by two Black women, State Senator Jennifer McClellan and Ms. Price. Both said they had drawn inspiration from their family history of experiencing voter suppression in Virginia.

“I had a great-grandfather in 1901 who had to take a literacy test and find three white people to vouch for him to be able to register,” said Ms. McClellan, a Democrat who is running for governor this year, along with Mr. McAuliffe. “In January, I found a copy of my dad’s receipt for the poll tax he had to pay.”

Ms. Price said the idea to recreate the preclearance statute at the state level was first discussed in 2017 by a group of Democratic legislators, all women of color. But even though Virginia was trending blue, the General Assembly was still controlled by Republicans, in part because of gerrymandered legislative district lines. Those districts were eventually thrown out by a court ruling in 2019, paving the way for a Democratic majority in both legislative chambers.

While the central provision in the bill is intended to be protective, rather than to create new, expansive policies, Ms. Price and Ms. McClellan pointed to several recent episodes that the bill would have helped prevent. In September 2020, with little public announcement, the Richmond registrar’s office moved from City Hall to a location that wasn’t as accessible by bus, causing confusion during early voting. The year before, the Virginia Beach City Council moved an early voting location to a building that was at least a mile away from the nearest bus stop.

Ms. Price said that instances of voter suppression in November, and the raft of restrictive legislation being produced by Republican-controlled statehouses across the country, added increased urgency to their effort

“Yes, it was reactive to Virginia’s history, but it was also proactive because of what we were seeing in other states,” Ms. Price said. “And we knew that we were not immune to it.”

In approving the bill, Mr. Northam added a few technical changes, so it will go back to the legislature later this month for final passage to become law.

While other states have created their own voting rights laws, Virginia’s stood out for specifically recreating some of the original federal protections.

“It’s building on what states like California and Illinois to a certain extent have done, but we really saw an opportunity to model what a full voting rights act can do,” said Marcia Johnson-Blanco, a co-director of the Voting Rights Project at the Lawyers’ Committee for Civil Rights Under Law.

The bill creates a provision that closely mirrors Section 2 of the federal Voting Rights Act, which allows affected groups and voters to challenge changes to balloting in court if they will negatively affect minority communities or lead to voter suppression.

Section 2 of the federal Voting Rights Act is currently being challenged at the Supreme Court, facing a threat to its existence.

Other provisions in the bill help expand access to voting in Virginia by requiring local election officials to provide voting materials in languages other than English if they meet certain thresholds; strengthening protections against discriminatory redistricting plans; and creating a Voter Education and Outreach Fund where all penalties stemming from voting lawsuits would be directed toward educating voters on their rights.

Yet while establishing the Virginia Voting Rights Act represents both a symbolic and landmark protection of voting rights, the state still has old laws on the books that voting rights groups say act as barriers to the ballot box. The Virginia Constitution still bars convicted felons from regaining their voting rights, though they can seek to have their rights restored through permission by the governor, as Mr. McAuliffe did in 2016.

“There are a lot of remnants from Jim Crow that still exist in Virginia,” said Tram Nguyen, a co-executive director at New Virginia Majority, a progressive group, who also worked on the bill. “Passing the Voting Rights Act of Virginia — being the first state in the South, the first state that was covered under Section 5 of preclearance to do it — signals to the country that here’s a state that has this dark history. And we are trying to get beyond that.”