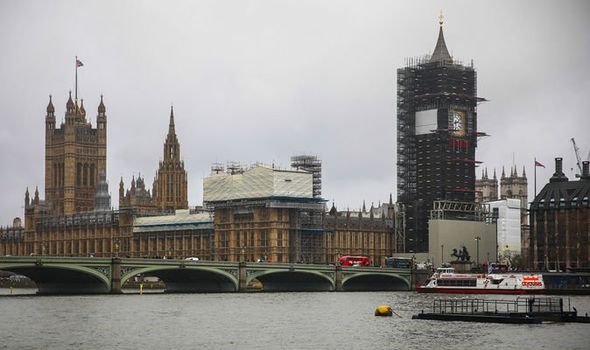 Refurbishing lifts in the Palace of Westminster and across the parliamentary estate is estimated to cost £40.95million. Work to upgrade the doors to Central Lobby ‑ which connects the House of Commons and the House of Lords ‑ is predicted to come in at £3.8million.

And a project to replace decorated tiles that is nearing completion is expected to cost £11.8million.

This comes as work continues on the restoration of the Elizabeth Tower which is home to Big Ben. It was originally predicted to cost £29million but is now expected to clock in at around £80million.

Experts are putting together a detailed plan for a full refurbishment of the palace which is expected to cost billions.

A spokesman for the “restoration and renewal” programme said: “The Palace of Westminster is falling apart faster than it can be fixed and is in urgent need of a programme of essential restoration.

“We are getting on with developing a detailed restoration plan, based on tens of thousands of hours of building investigations, that will for the first time give a true sense of the work required, costs and timescales.

“Parliament will vote on the plan before the restoration work commences.”

Kilmarnock and Loudoun MP Alan Brown, who obtained the latest figures, said: “I am truly astonished at the amount of money thrown at works that many people will not see as a necessity.”

He added: “Let’s not forget they will be looking to spend billions of pounds to restore the Palace of Westminster so it seems crazy to be spending millions of pounds on work that might end up being ripped out or redone within the wider refurbishment plans.”

A House of Commons spokesman said the £3.8million work on the Central Lobby doors was “vital” to “ensure they meet all necessary security and safety standards”.

The lift refurbishment programme will be rolled out in two phases.

Defending the £11.8million spent on replacing “encaustic tiles”, the spokesman said: “After years of wear and tear, many of the unique tiles were deteriorating, so the decision was taken to conserve or replace the pavements, before the unique designs and vivid colours were lost forever. The last of almost 60,000 tiles was laid by specialist stone masons in the middle of central lobby earlier this year.

“Some of the tiles which were taken up were reused, but many more, some original and some twentieth-century replacements, could not be reused as they were too worn or because they were broken when lifted from being bedded in hard cement.”

John O’Connell, chief executive of the TaxPayers’ Alliance, said: “While some maintenance costs are understandable, every effort must be made to ensure good value for money for the taxpayer. With politicians still wrangling over details of the wider restoration programme, taxpayers worry that works will be gold plated and budgets spiral out of control.

“Authorities must avoid paying over the odds for these endless parliamentary refurbishments.”