WASHINGTON — The Federal Emergency Management Agency, often maligned for its response to prominent natural disasters, is quietly helping California respond to and recover from the wildfires across the state, including the deadliest in the state’s recorded history.

Here’s what FEMA is doing — and what it is not doing — to help and why it is frequently criticized for its response to natural disasters.

What is FEMA’s role in the California wildfires?

As with most natural disasters, FEMA is operating in a support role in California. The responsibility of first responder falls to state and local governments, with the agency coordinating federal aid.

What has FEMA done in California so far?

Since President Trump issued a major disaster declaration this month for the state of California, the agency has approved more than $12.7 million in federal assistance for survivors affected by wildfires in three California counties, Butte, Los Angeles and Ventura, according to Elizabeth Litzow, a spokeswoman for FEMA.

The funding includes grants for temporary housing and home repairs and low-cost loans to cover uninsured property losses. FEMA has joined with California to set up a disaster recovery center, a one-stop shop where residents affected by the fires can file insurance claims, obtain grants for food and shelter, and register for other federal aid. The agency has so far received more than 16,000 applications for assistance. About 550 FEMA staff members are on the ground helping local officials, Ms. Litzow said.

So who is actually leading the emergency response efforts in California?

The California Governor’s Office of Emergency Services is managing the state’s efforts to fight the wildfires. FEMA is coordinating the work of other federal agencies, like efforts by the Defense Department to provide pilots to help the state assess the fires’ effect.

Didn’t FEMA take on a larger role in Puerto Rico after Hurricane Maria?

Yes. In the case of Puerto Rico last year, Hurricane Maria destroyed most of the island’s infrastructure and the local government was overwhelmed by the size of the destruction. 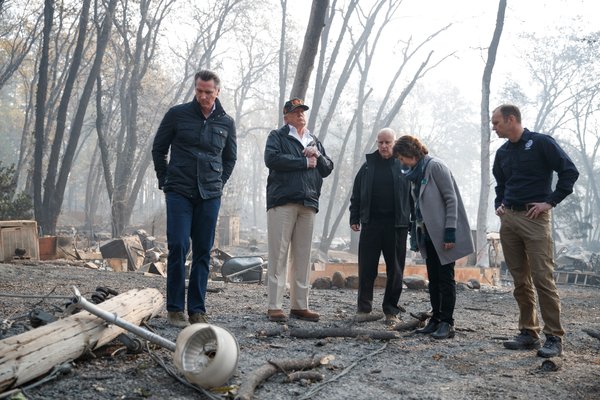 That left the agency to assume more responsibility, like delivering supplies, a job typically left to the states.

Having the agency take on a larger role than what is mandated by the law “is never a good situation,” Brock Long, the agency’s administrator, told the Senate Homeland Security Committee in October 2017. “When FEMA is the first and primary responder, and the only responder for many weeks, we are never going to move as fast as anybody would like.”

Why is FEMA the focus of so much attention during natural disasters?

Since its founding in 1979, FEMA has been the subject of intense criticism, particularly after its delayed response to Hurricane Katrina in 2005. The hurricane killed 1,800 and destroyed more than 800,000 housing units, leaving many homeless.

The federal government, particularly FEMA, was blamed for many of those issues because the agency underestimated the impact of the storm and did not stock supplies beforehand at designated shelters like the Superdome.

In addition, Michael D. Brown, the director of the agency at the time, had relatively little experience dealing with disasters and emergency response. Before joining the Bush administration, he was the commissioner of the International Arabian Horse Association and landed his job at FEMA through his friendship with a longtime Bush adviser.

That spurred a number of changes at the agency, like mandating that the FEMA chief have experience managing emergencies. The agency also began positioning supplies before natural disasters so that it could get them to those affected faster.

But the agency still has shortcomings.

An internal report assessing the agency’s response to the storm season last year found that it was sorely unprepared after Hurricane Maria. Its initial efforts on Puerto Rico were disorganized and plagued with logistical problems, the report said; the agency grossly underestimated how much food and fresh water it would need and how hard it would be to get additional supplies to the island.

Responses to a crisis there, the report found, were based on a focused disaster like a tsunami, not a major storm devastating the whole island.

Still, the agency did receive praise for its work during hurricanes in North and South Carolina when it helped thousand of people with temporary housing.

What else does FEMA do?

FEMA also provides training for state and local emergency managers. The Department of Homeland Security, the parent agency of FEMA, provides law enforcement and counterterrorism funding as well as emergency management grants through the agency to state and local agencies. FEMA takes a lead role in the mostly classified continuity-of-government program, which ensures that the federal government is able to operate after a catastrophic event such as nuclear war or a terrorist attack.