President Trump’s norm-shattering ways now extend to a refusal to tell voters what he actually wants to do with four more years in the White House. 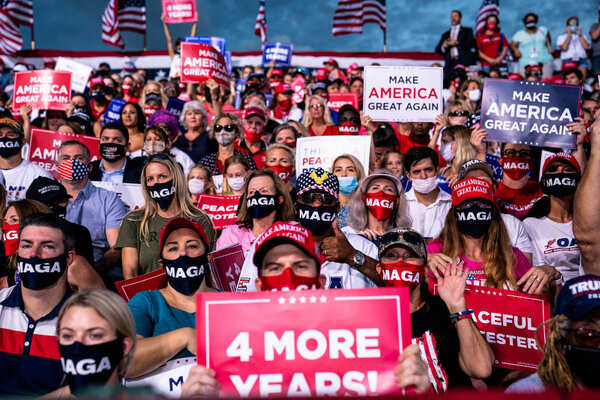 By Lisa Lerer and Annie Karni

DELAWARE, Ohio — Donald J. Trump entered the political arena five years ago with a ride down his golden escalator and a clear if concise platform for his presidential campaign.

“I would repeal and replace the big lie, Obamacare,” he said. “I would build a great wall, and nobody builds walls better than me.” He added a flourish that became a campaign rallying cry: “I will have Mexico pay for that wall.”

This time around, Mr. Trump has struggled to make the election about anything other than himself.

For months, his advisers have pushed him to lay out a vision for a second term, putting out news releases for him that promise a mission to Mars, a “manned presence on the moon,” and the “world’s greatest infrastructure system.” Those proposals, though lacking in detail, have been driven in part by the campaign’s internal polling, which shows that voters want to hear his plans.

But “the vision thing,” as George H.W. Bush once called it, takes up little time at the president’s rallies.

Instead, Mr. Trump has promised more of the same, and warned that the alternative could be scarier. The problem of running with little new to say has been most pronounced in the campaign’s throwback of a slogan: “Make America Great Again, Again.”

Even some supporters remain uncertain of what Mr. Trump plans to do with a second term.

“I haven’t looked into it much. I don’t know,” said Kyla Burns, 20, when asked to name a policy or issue the president might pursue, as she strolled through the historic town center of Delaware, Ohio. “I was just like, I need to vote and put my name out there to support him.”

For a presidency defined by breaches of political and presidential tradition, Mr. Trump’s inability to detail how he would use four more years remains a notable break with every other general election candidate in recent American history.

Four years ago, Mr. Trump centered his campaign on a series of broad pledges — cracking down on China, restricting immigration and “draining the swamp” of Washington — though the specificity of his promises did not match those provided in a 288-page book released by Hillary Clinton’s campaign detailing her plans.

Now, much of his agenda seems rooted in reprising past battles, and on simply returning to the pre-coronavirus economic gains he claims credit for. The bulk of his message is focused on attacking Joseph R. Biden Jr. and playing down the continuing threat of the virus, with little attention paid to how he would pull the country out of the pandemic. He has ruled out future shutdowns, which he has little control over as president, and has falsely argued that the virus is receding even as cases surge.

“We’ve never seen this before,” said Douglas Brinkley, the presidential historian. “In traditional American presidential election theater, you’re forced to lay out your plan for tomorrow.”