In a tense exchange at a hearing on Wednesday, one of the newest members of Congress, Representative Ilhan Omar, confronted Elliott Abrams, a Trump administration official, over his role in foreign policy scandals decades ago, including the Iran-contra affair and the United States’ support of brutal leaders abroad.

Mr. Abrams, who served in top State Department positions under President Ronald Reagan and has remained part of the Washington foreign policy establishment, was appointed last month to be the Trump administration’s envoy to Venezuela, where a dispute is raging over control of the nation’s presidency. Last month, the United States weighed in, recognizing the opposition leader Juan Guaidó as part of a campaign by the Trump administration to oust President Nicolás Maduro.

What happened at Wednesday’s hearing?

Mr. Abrams was one of three people asked to appear before the House Foreign Affairs Committee for a hearing on Venezuela, an area of the world he knows well. Under Reagan, Mr. Abrams was an assistant secretary of state who fiercely advocated interventionism, including the covert arming of Nicaraguan rebels in the mid-1980s, a scandal that became known as the Iran-contra affair.

In the hearing on Wednesday, Ms. Omar, Democrat of Minnesota, confronted Mr. Abrams over his role in that scandal and his support for brutal Central American governments. In one tense exchange, Ms. Omar recalled testimony from Mr. Abrams about a massacre in which units of El Salvador’s military, trained and equipped by the United States, killed nearly 1,000 civilians in 1981 in the village of El Mozote.

In 1982, Mr. Abrams dismissed news reports about the massacre as not credible and as leftist propaganda, and he later described the Reagan administration’s record in El Salvador as a “fabulous achievement.”

“Do you think that massacre was a ‘fabulous achievement’ that happened under our watch?” Ms. Omar asked him at Wednesday’s hearing.

“That is a ridiculous question, and I will not respond to it,” Mr. Abrams said. “I am not going to respond to that kind of personal attack, which is not a question.”

What is the Iran-contra affair?

The Iran-contra affair was a political scandal that dogged the second half of the Reagan presidency.

It centered on two controversial, and linked, actions undertaken by his administration. One was the sale of weapons to Iran, despite an embargo, purportedly to secure the release of American hostages held in Lebanon. The second was the use of proceeds from those weapon sales to support the right-wing contra rebels in Nicaragua in their fight against the leftist Sandinista government. 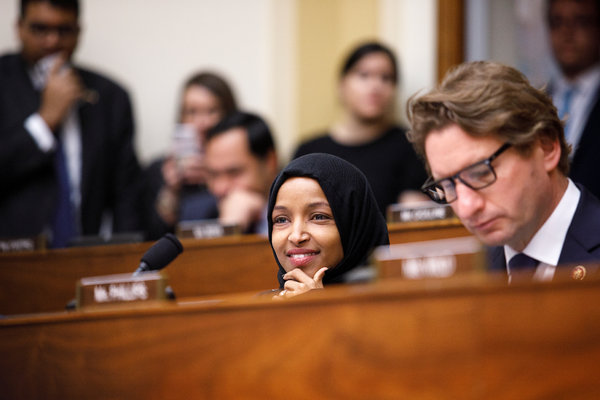 When first revealed publicly by a Lebanese magazine in 1986, the weapons sales were criticized for violating both the embargo and the United States’ refusal to negotiate with terrorists. The use of money from the sales to support the rebels in Nicaragua was also controversial because it violated a congressional ban restricting military aid to the group.

Reagan emerged largely unscathed by the scandal, leaving office with the highest approval rating of any president in decades. But more than a dozen others were charged with criminal offenses, primarily for withholding information from Congress. They included some who remain active in American politics to this day, such as Oliver L. North, now the president of the National Rifle Association, and Mr. Abrams.

While serving in the State Department under Reagan, Mr. Abrams was a fierce advocate of arming the rebels and, in 1991, he pleaded guilty to two misdemeanor counts of withholding information from Congress about those secret efforts. He was pardoned the next year by President George Bush.

What were Ms. Omar’s criticisms?

Ms. Omar devoted most of her time during the hearing to detailing Mr. Abrams’s role in events abroad during the Reagan administration, often cutting off his responses by telling him she had not asked a question.

She did, however, ask one question: whether Mr. Abrams would “support an armed faction within Venezuela that engages in war crimes, crimes against humanity or genocide if you believed they were serving U.S. interests, as you did in Guatemala, El Salvador and Nicaragua?”

The United States’ involvement in Guatemala is not as well known as the Iran-contra affair, but the country was crucial to the Reagan administration’s strategy in Central America, with Washington often looking the other way when presented with evidence of atrocities. In 1982, the Reagan administration started to cultivate Gen. Efraín Ríos Montt, who seized power that year in Guatemala, as an ally in the region in its fight against the Sandinista government and Salvadoran guerrillas.

Reagan praised General Ríos Montt even though American officials privately knew the Guatemalan military had killed its own people. The general was convicted of genocide in 2013.

El Salvador officially apologized for the El Mozote massacre in 2011.

What has Mr. Abrams been doing since the Reagan years?

Despite his role in the Iran-contra affair, Mr. Abrams has remained active in politics.

In the 1990s, he led a think tank dedicated to applying Judeo-Christian values to public policy. He later joined the administration of President George W. Bush as an adviser on Middle East affairs.

In 2017, President Trump blocked Mr. Abrams from serving as a deputy to Rex W. Tillerson, then the secretary of state. But last month, Secretary of State Mike Pompeo was able to appoint Mr. Abrams as a special envoy to lead the department’s efforts on Venezuela.