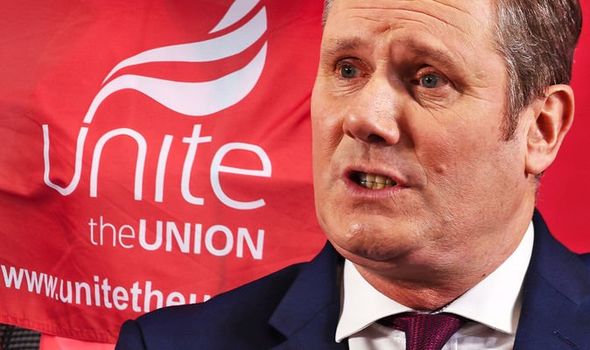 Sharon Graham, the general secretary of the union, said this evening that the remaining financial support for the political party “is now under review”. She added that Labour’s alleged “mistreatment of our members will not be accepted”.

Ms Graham made reference to the current strike of bin men in Coventry against a Labour-run Council.

Unite first announced that it was withdrawing funding in October, in a growing rift since Sir Keir Starmer took over as leader from Jeremy Corbyn.

It was said to have reduced its annual funding by 10 percent, understood to be equivalent to just under £1million.

Ms Graham said that although Unite would still pay £1million in affiliation fees to Labour, she said that there was “a lot of other money” that could be used elsewhere.

She told the Guardian: “There’s a lot of other money that we use from our political fund where, actually, I’m not sure we’re getting the best value for it.”

“Your behaviour and mistreatment of our members will not be accepted. It’s time to act like labour, be the party for workers.”

Her comments came as she appeared at an online rally in support of refuse collection drivers employed by Coventry Council.

The bin men have been on strike since January 31 in a dispute over pay.

According to Unite, the workers are paid a basic rate of between £11.49 to £14.37, despite being licenced to drive an HGV.

The union added that this “below comparable rates of pay” for other HGV drivers in the region.

The “tense” strike has so far cost the Council an estimated £1.8million and threatens to continue.

Unite said that Coventry Council had made the dispute worse by setting up an alternative bin collection service using agency drivers.

The new bin service is a private firm but owned by the local authority.

Andrew Walster, director of street scene at Coventry City Council, told the BBC: “Obviously I’d hope to protect jobs, but that may not always be possible.”

He added it was “difficult to say” how many jobs could be lost.

“The Council estimates that the dispute has already cost it £1.8 million and yet it continues to pour money into a private waste service rather than resolve the strike.”

Noting that it was a Labour-run Council, she continued: “Other Councils up and down the UK have increased pay rates for refuse collection drivers to preserve services due to the HGV driver shortages.

“If other Councils can increase pay rates to preserve services and prevent an exodus of drivers, there is absolutely no reason why Coventry council can’t do the same.”