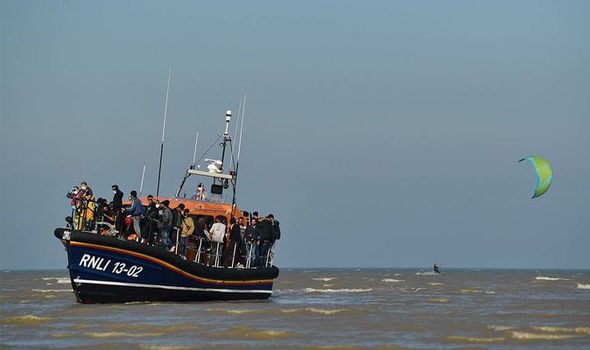 It comes amid warnings that the arrival of record numbers of migrants has pushed Conservative voters’ patience to breaking point.

France’s failure to stop the dangerous crossings threatens to damage already fraught relations with the UK. Boris Johnson has pressed for France to “police the beaches” after a record-breaking 1,185 people reached the UK on Thursday.

Tony Smith, a former head of the Border Force, has accused France of “turning a blind eye” to the deaths of migrants and the activities of criminal gangs.

Former security minister Sir John Hayes urged the Government to bring forward plans to turn back the boats, saying: “If not now, when?”

Sir John, who leads the Common Sense group of MPs, warned the crossings “make a nonsense of the claim that we’ve taken back control of our borders”. He added: “[The] Government really needs now to do what I know they’ve been planning for some time, which is to turn back the boats and to process all asylum applications offshore.

“[In] Australia that had a dramatic effect on the number of people crossing because the truth is that a combination of people traffickers, economic migrants and irresponsible and greedy rights lawyers are gaming the asylum system.”

Australia ignited international controversy after it launched Operation Sovereign Borders in 2013.The military towed boats back to Indonesia and people who did reach Australia were sent to offshore processing centres.

He said: “It’s a big issue in the constituency… The patience of the Conservative voter with the Government to deal with this issue is reaching its elastic limit.

“[We] should deport them immediately, which would be a disincentive for people to waste their money with ruthless people traffickers, placing themselves in mortal danger.

“If they knew they were going to be turned around immediately and sent back to France, it would only take a week and it would stop.”

But Enver Solomon, chief executive of the Refugee Council, stressed the dire situation facing people who have fled their home countries.

He said: “Increasing numbers of people making terrifying journeys across the Channel in freezing cold weather is a dreadful reminder of the lengths people are forced to take to be safe.”

A Home Office spokeswoman said: “The number of illegal migrants we have seen departing from France is unacceptable.

“The British public have had enough of seeing people die in the Channel while ruthless criminal gangs profit from their misery.

“Our New Plan for Immigration will fix the broken system, which encourages migrants to make this lethal journey.”