WASHINGTON — Presidential budgets are by tradition declared dead on arrival even before the details reach Capitol Hill, and President Trump’s $4.75 trillion budget for the 2020 fiscal year received that greeting in spades on Monday.

But with a new Democratic majority in the House, the release of Mr. Trump’s budget blueprints marked the start of a consequential budget season. House Democrats must now work out a blueprint for governing that will define the party’s vision in clear terms — and answer burning questions on health care, taxation, climate change and other policy matters that have dogged the new majority since it took control.

In short, it is time for the Democrats to show their cards.

“We have a very different set of values and priorities,” Representative John Yarmuth of Kentucky, the chairman of the House Budget Committee, told reporters on Monday. “Ours will be a very realistic budget resolution.”

The budget is a nonbinding document, and with Republicans controlling the Senate, it may be impossible for the two chambers to work out their differences. But just as the first budget of the Tea Party Republican era, in 2011, defined the party for years, the budget that House Democrats pass this year will almost certainly have political consequences.

Mr. Yarmuth outlined a number of issues that Democrats hope to address in a budget that he said the committee hoped to unveil by mid-April, pointing to health care savings, a possible immigration-law overhaul and infrastructure investment as likely priorities. He pointed to prescription drug pricing, combating the opioid epidemic, infrastructure and investment in cybersecurity as areas in the administration’s proposal that could yield compromise.

“The ingredients — in terms of either end of the Capitol — are there to make a reasonable deal,” Mr. Yarmuth said. “The White House is the wild card.”

But even without Republicans, Democrats will need to find common ground. An increasingly vocal left flank is adamant that their initiatives — such as “Medicare for all” and the ambitious Green New Deal — be included in an initial budget blueprint. More moderate Democrats are likely to be just as adamant that they are not.

And Mr. Yarmuth appeared to tip his hand when he said that a final budget proposal would probably focus on protecting and restoring elements of the Affordable Care Act, as opposed to endorsing Medicare for all. 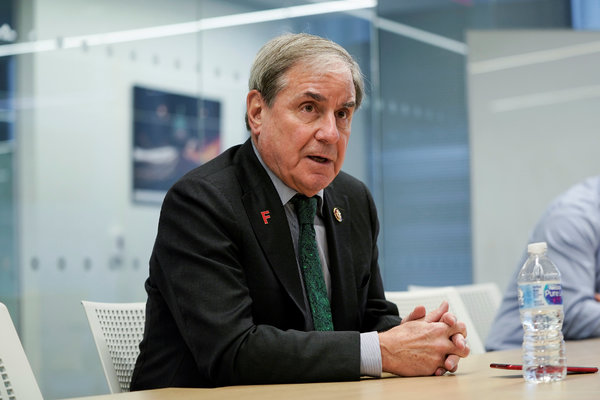 This spring’s budget will force Democratic leadership to weigh the limitations of divided government against the desires of members who won their seats by promising to shake things up in Washington.

In 2011, House Republicans — who also faced a Senate and a White House under the control of the opposing party — lost support from rank-and-file members as they muscled through an ambitious budget devised to limit federal spending. The budget produced by the Budget Committee chairman at the time, Paul D. Ryan, included deep domestic spending cuts and plans to offer voucherlike “premium support” to older Americans to buy private insurance outside Medicare. Democrats used that budget as a political cudgel.

Democrats face the same prospects, and they are divided on which policies to enshrine in the blueprint. In an effort to hear a range of perspectives, Mr. Yarmuth has met with the Congressional Progressive Caucus and is scheduled to meet with the Blue Dog Coalition, a group of Democrats who preach fiscal discipline, to discuss the coming budget. Both groups have members on the Budget Committee.

“So far, we haven’t run into any huge ideological obstacles to putting together a reasonable budget,” Mr. Yarmuth said.

Representative Ro Khanna, a liberal Democrat from California and a member of the committee, said he planned to advocate the inclusion of Medicare for all and other facets of a progressive agenda, as well as rolling back some elements of Republican tax cuts passed under Mr. Trump and President George W. Bush.

“We have to make the case for economic growth for progressive policies,” Mr. Khanna said in an interview. Including Medicare for all in the final budget provides an opportunity for Democrats to “explain to the American people that this is going to save average families and the country money.”

He acknowledged that it was unlikely that there would be a complete embrace of all of the policies, particularly the Green New Deal’s sweeping plan for tackling climate change and providing jobs, but that should not deter Democrats from including some nods to the broader vision.

“That pragmatic vision has to be done side by side with the aspirational one,” he said.

Lawmakers also have to contend with a ballooning federal deficit and a looming deadline to address spending caps that Congress put in place under President Barack Obama. While Mr. Trump’s budget proposal technically adheres to the limitations, Mr. Yarmuth said the side were far from an ideal starting point in negotiations.

“We’re so far apart in our priorities that we have to wonder if the White House is going to be a serious negotiator, and that’s disturbing,” Mr. Yarmuth said. “But, on the other hand, this is a proposal not unlike the one they submitted last year, and we ultimately came up with a spending agreement.”