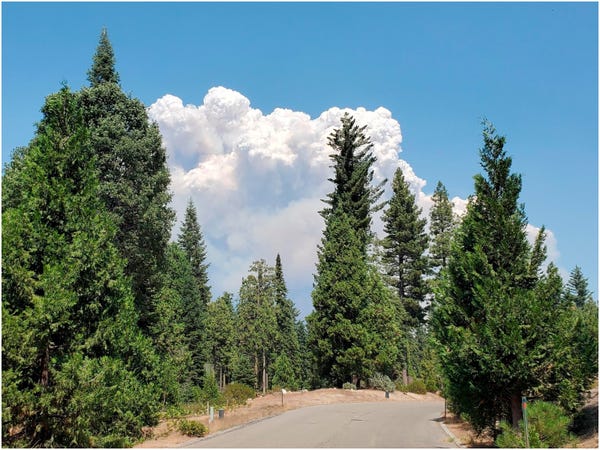 Around 150 campers were trapped as wildfires surrounded them in a forest in north California.

The people took shelter at the campground in the Mammoth Pool Reservoir, a popular recreational spot,  in the Sierra National Forest.

The Madera County Sheriff's Office posted an update on the shelter-in-place situation on their Facebook page on Saturday, and clarified that "all are safe at this time" on their Twitter account.

"We understand the swell of concern for Mammoth Pool Reservoir today, but we have to stress the importance of avoiding the area. Emergency crews from multiple agencies need to focus on the critical task at hand — rescue of the approximately 150 people sheltering-in-place at Mammoth Pool Boat Launch," the Facebook post said.

On Saturday night, the Sierra National Forest Twitter account tweeted that 53 campers were rescued from the boat launch area in Mammoth Pool Bay.

The Fresno Bee reported Blackhawk helicopters were also used to airlift the campers from the area.

The Fresno Fire department tweeted that out of those 63 people, 51 had minor injuries or none at all, 10 were "moderately injured," and two were severely injured.

Tune said the fire "jumped" a river and blocked off the single road granting access to the Mammoth Pool Campground. However, Tune told Associated Press that he didn't know how close the fire was burning to the campsite, but that "all our resources are working to make that escape route nice and safe for them [the trapped campers]."

Tune added: "Once the fire gets going, it creates its own weather, adding wind to increase the spread."

The fires across California since August have been stoked by record temperatures.  The National Weather Service, which currently has an Excessive Heat Warning on most parts of California, plus Red Flag Warnings on some, recorded an all-time high September temperature of 130F for Death Valley.