NEARLY 2,000 flights have already been canceled this weekend and more are likely on the way as the new Covid variant wreaks havoc on the holiday season.

Flight-tracking website FlightAware reported that nearly 1,000 flights that were leaving, entering, or set to fly within the US on Saturday were canceled. 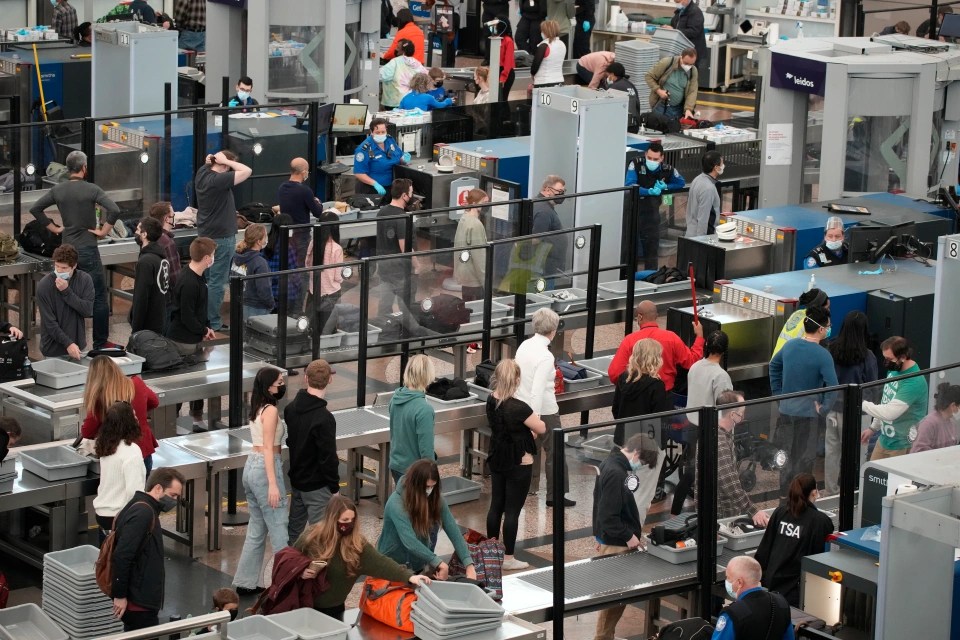 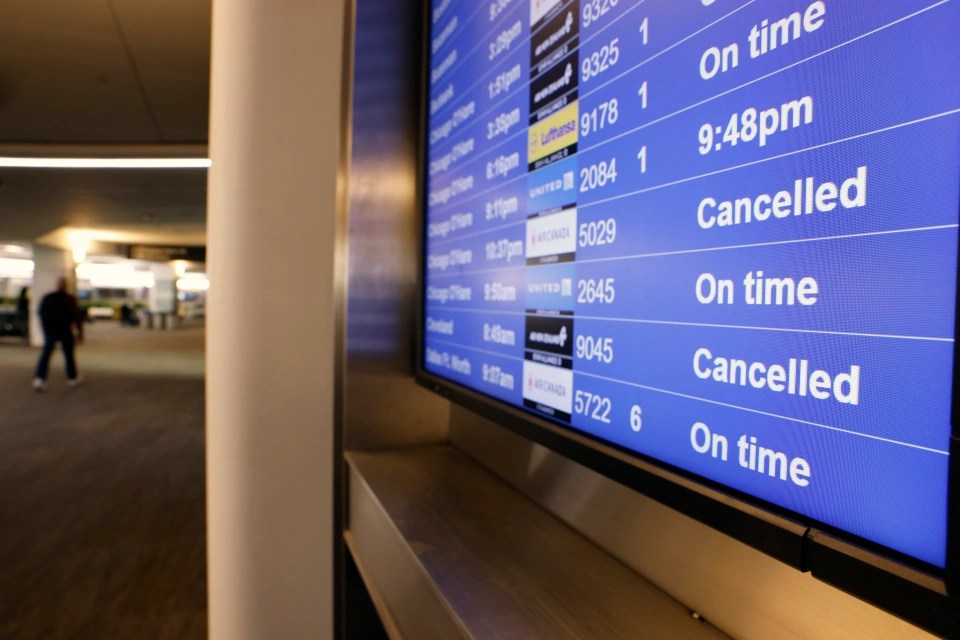 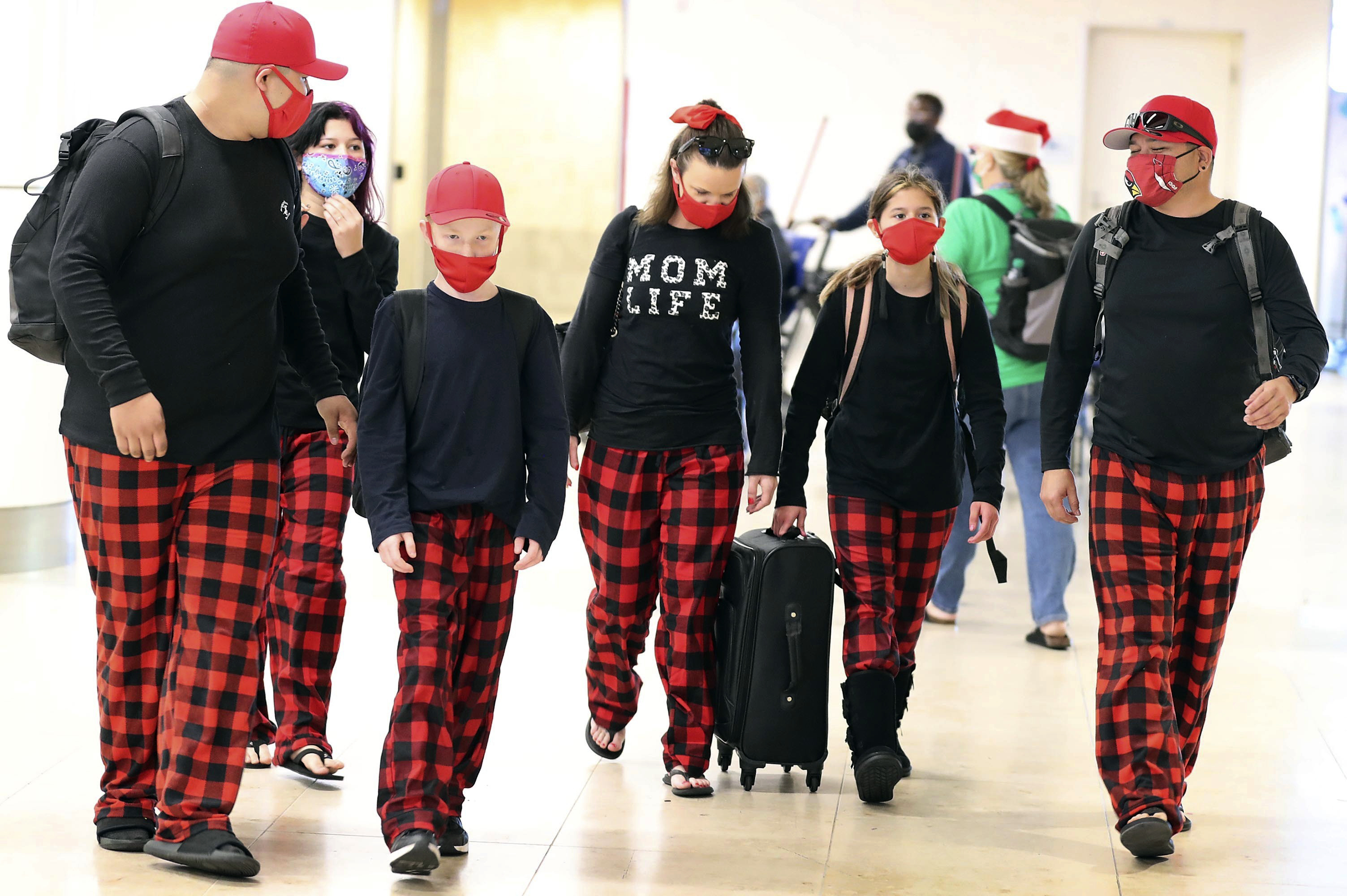 That number is up from the 690 domestic flights that were canceled on Friday, while more than 250 flights have already been scrapped for Sunday.

Globally, more than 6,000 flights have been canceled between Christmas Eve to December 26.

On Friday, Delta, United, and JetBlue had all said the Omicron variant was causing staffing problems, and leading to flight cancelations.

“This was unexpected,” United spokesperson Maddie King said of the holiday travel snafu.

Just before the Sunday of Christmas weekend, FlightAware showed that 989 domestic flights were canceled, while 2,727 US-related flights were delayed.

ROLLING IN THE DEEP END

It came after 690 on Christmas Eve with at least another 221 expected on December 26.

The three airlines canceled more than 10 percent of their scheduled Saturday flights.

In addition to Omicron hitting the globe hard, extreme weather in certain areas of the US also complicated travel.

Forecasters had warned this week that holiday travel, especially through high passes, would be affected by bouts of rain, mountain snow, and gusty winds.

"Travel will be treacherous, to at time(s) impossible, from the Sierras to the central Rockies this weekend due to whiteout conditions and drifting snow," the National Weather Service warned.

Germany-based Lufthansa said on Friday that it was also canceling a dozen long-haul transatlantic flights because of a “massive rise” in sick leave among pilots.

The cancelations on flights to Houston, Boston, and Washington come despite a “large buffer” of additional staff for the period.

Lufthansa said it couldn’t speculate on whether Covid-19 infections or quarantines were responsible because it was not informed about the sort of illness.

The airline said in a statement that “we planned a very large buffer for the vacation period. But this was not sufficient due to the high rate of people calling in sick.”

“The nationwide spike in omicron cases this week has had a direct impact on our flight crews and the people who run our operation,” United said in a statement to several news outlets.

The airline added: “As a result, we’ve unfortunately had to cancel some flights and are notifying impacted customers in advance of them coming to the airport.”

United said it was working to rebook as many people as possible.

Delta said it canceled flights on Friday because of the impact of Omicron and the possibility of bad weather after it had “exhausted all options and resources – including rerouting and substitutions of aircraft and crews to cover scheduled flying.”

It said in a statement to several outlets that it was trying to get passengers to their destinations quickly.

Air travel across the US is expected to tick back up close to pre-pandemic levels during the next couple of holiday weeks.

United CEO Scott Kirby said on Monday that he expected 420,000 customers a day to travel on United flights over the next two weeks.

A total of 109.5million people are expected to travel over the holidays, according to AAA predictions, despite the growing concern of the new Covid variant.

The surge in travel comes as the US is recording nearly 187,000 new daily cases, a 55 percent increase over the last two weeks.

For travelers, that means time away from loved ones, chaos at airports, and the stress of spending hours standing in line and on the phone trying to rebook flights.

Peter Bockman, a retired actor, and his daughter Malaika, a college student, were supposed to be in Senegal on Saturday celebrating with relatives they hadn’t seen in a decade.

But their 7.30pm flight on Friday from New York to Dakar was canceled – and they didn’t find out until they got to the airport.

They were at the airport until 2am desperately trying to rebook a flight.

“Nobody was organizing, trying to sort things out,” he complained, blaming Delta for a lack of customer service.

“Nobody explained anything. Not even, ‘Oh we’re so sorry, this is what we can do to help you.’”

They’ve booked a new flight for Monday night that has a layover in Paris, but they’re worried they’ll still experience travel nightmares in getting to Dakar.

Since Covid hit the globe, flight delays and cancellations tied to staffing shortages have been a regular problem for the US airline industry.

Airlines encouraged workers to quit in 2020, when air travel collapsed, and were caught short-staffed this year as travel recovered.

To ease staffing shortages, countries including Spain and the UK have reduced the length of Covid-19 quarantines by letting people return to work sooner after testing positive or being exposed to the virus.

Delta CEO Ed Bastian was among those who have called on the Biden administration to take similar steps or risk further disruptions in air travel.

On Thursday, the US shortened Covid-19 isolation rules for health care workers only.

If your holiday flight was canceled, the Department of Transportation (DOT) guarantees a refund.

"A passenger is entitled to a refund if the airline canceled a flight, regardless of the reason, and the passenger chooses not to travel," DOT’s website states.

"DOT has not specifically defined what constitutes a 'significant delay,'" the website continues.

Although a refund is guaranteed, an alternative flight to your desired location for the same price is not.

More expensive flights are common, and there is no guarantee a flight will be scheduled the same day. 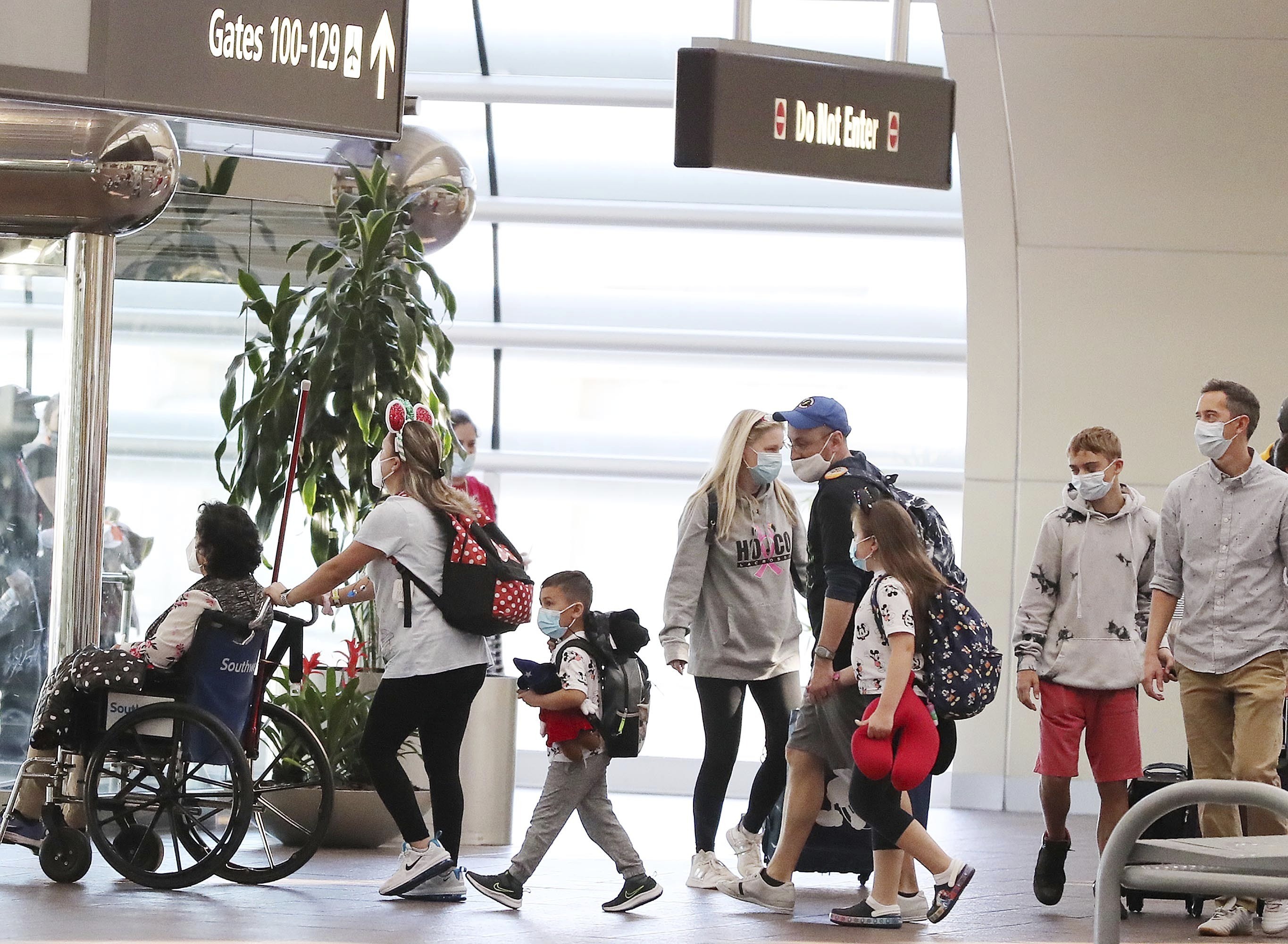 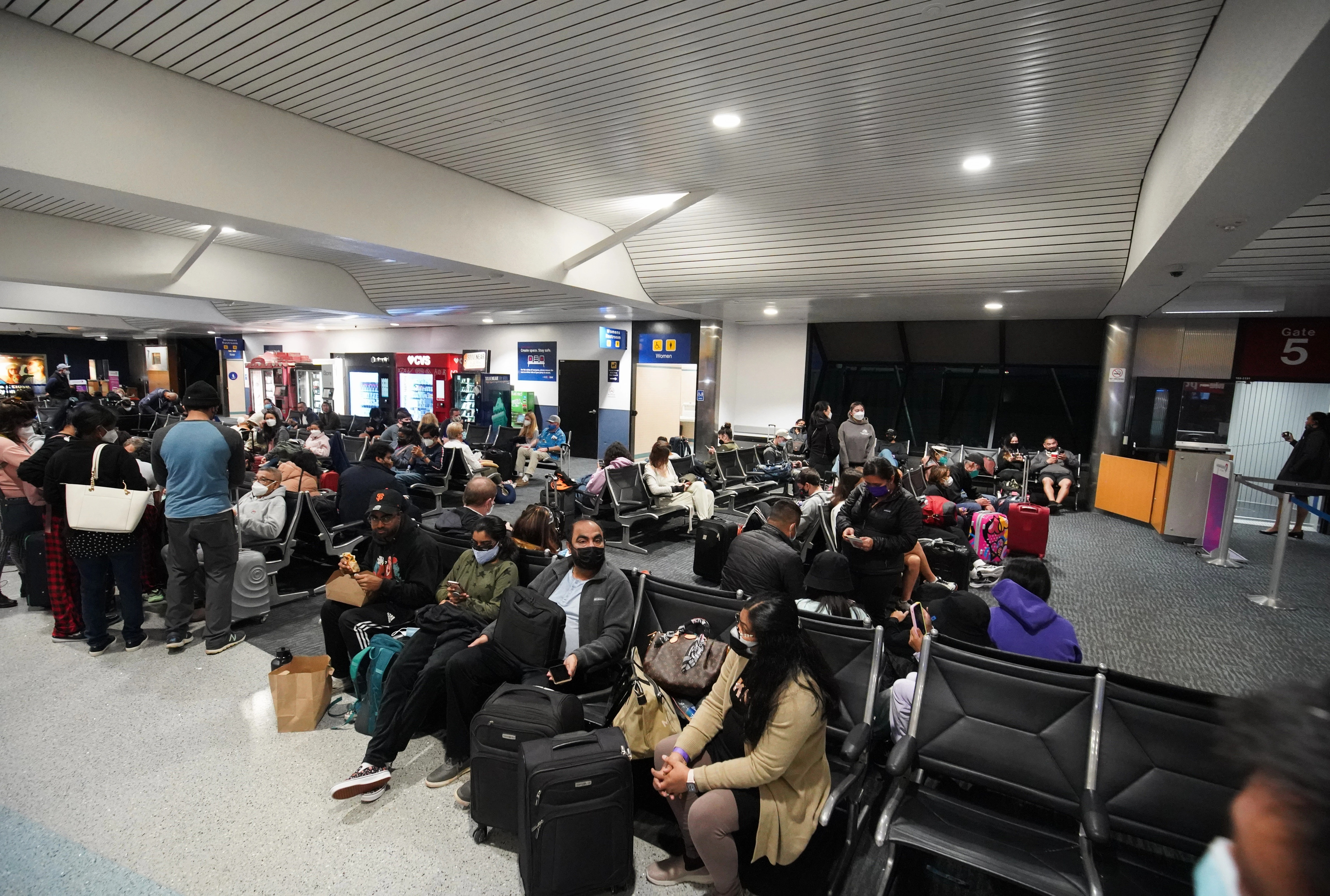 Expert studies have shown that the risk of severe illness from Covid-19 is reduced by 90 percent or more among people who are fully vaccinated.

While there are breakthrough cases of Covid among people who are vaccinated, they are rare.

In the event of a breakthrough case, victims are highly unlikely to be hospitalized with severe or deadly symptoms from the virus.

Health officials have advised that the Omicron variant is more infectious and could lead to further breakthrough cases.

Yet the spread can be offset by all vaccinated Americans receiving a booster shot.

Current vaccines are expected to protect against severe illness, hospitalizations, and deaths due to infection with the Omicron variant.

With other variants, like Delta, vaccines have remained effective at preventing severe illness, hospitalizations, and death.

Studies have also shown that side effects from the vaccine are extremely rare.