Dishing out fourth Covid vaccines may only offer a small benefit, according to early research.

Israel has already announced over-60s and health workers will get a second booster jab in an effort to ‘protect ourselves’ from Omicron.

Preliminary results of a trial, carried out before the country pressed ahead with the scheme, showed extra jab led to a five-fold increase in antibody levels.

For comparison, this is half the level recorded in similar studies following a third jab.

Developed nations rolling out Covid boosters when many people around the world have yet to receive a first dose has become increasingly controversial.

And UK experts have repeatedly questioned the idea of repeatedly dishing out jabs every few months, labelling the idea ‘untenable’. Sir Patrick Vallance, No10’s chief scientific adviser, last night said the inoculation drive would soon ‘settle’ into a yearly programme, like for flu.

‘We know a week after administration of a fourth dose, we see a five-fold increase in the number of antibodies in the vaccinated person.

‘This most likely means a significant increase against infection and… hospitalisation and (severe) symptoms.’ 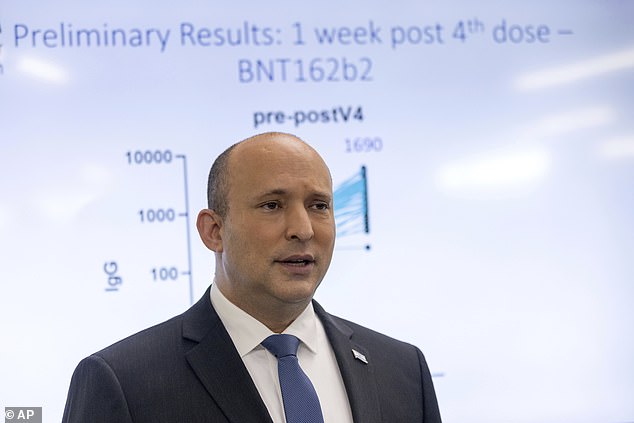 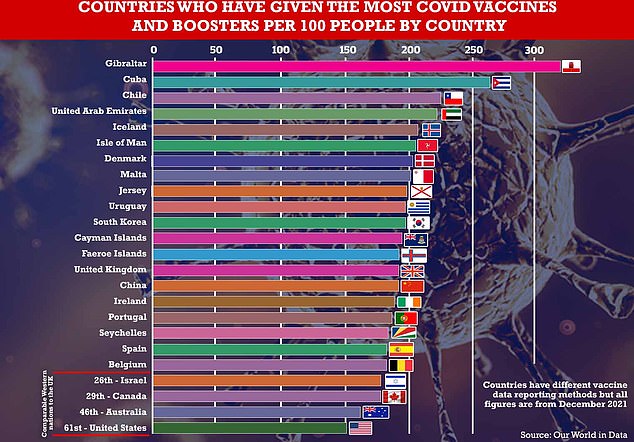 The graph shows the countries who have given the highest total number of vaccine doses and boosters per 100 population. It demonstrates how a number of nations are now, on average exceeding two doses per person. The UK is a mid tier performer in the lower cohort of the top 20 performers while the US doesn’t even manage to make the cut 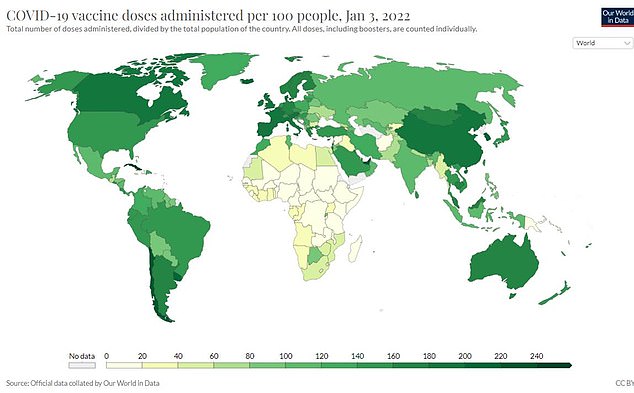 This map shows the number of vaccines administered per 100 people, Africa, where Omicron was first identified and is believed to have emerged, has, as a continent, among the lowest number of vaccinated people in proportion to its population in the world. Developing countries like the UK and Israel rolling out boosters while so many people globally have yet to receive their first dose has been criticised by experts and the World Health Organization

Results of a phase one trial showed the jab, made by California-based biotechnology firm Gritstone, triggered high levels of neutralising antibodies.

The proteins help the body to fight off the virus, stopping it from infecting cells and taking hold.

The immune response was similar to already-approved mRNA vaccines, created by Pfizer and Moderna. But the team did, however, find antibody levels were up to 10 times lower among its volunteers.

The jab was initially trialled on 10 individuals but the researchers want to expand the study to include 120 over-60s, who are in good health and have previously received two doses of the Oxford/AstraZeneca jab.

A universal Covid vaccine is a highly-coveted ‘Holy Grail’ among the pharmaceutical industry, with several candidates already in development.

The Sheba Medical Center data is taken from its staff who were involved in a trial of fourth jabs during a nationwide surge of Omicron infections.

Israel became the first country in the world to roll-out a second round of boosters, in response to fears that immunity wanes among the vulnerable and elderly.

Both the UK and US will eventually face pressure to follow suit, but both nations have insisted there are no plans to administer fourth doses yet.

But the country — often hailed for having a world-beating inoculation drive — has embarked on a different programme to the UK.

For example Britain spaced out the first and second dose by 12 weeks and used three different types of Covid jabs, AstraZeneca, Pfizer, and Moderna.

Israel on the other hand stuck to three weeks for the primary course and has thus far relied entirely on Pfizer jabs.

Some experts have argued that a longer gap between jabs primes the immune system better.

The UK originally began offering Pfizer boosters after six months, before chopping the gap down to three months to help ward off Omicron.

Experts believe the mix-and-match approach may offer bigger benefits compared to sticking to the same jab.

Israel has opted for a three month gap for its booster followed by a fourth month gap for another additional dose in certain demographics.

There has been speculation that rolling out booster jabs so quickly may come with diminishing returns.

A previous study, from the Sheba Medical Center, on the impact of a third Covid jab appears to indicate this.

Published in September, it recorded a 10-fold increase in antibodies among medical staff after a third Covid jab.

Other studies from vaccine manufactures Pfizer and Moderna have also seen higher antibody boosts following a third jab in tests against the Omicron variant.

The latest Sheba Medical Center research began on December 27 and involved 150 medical workers who had received their third jab four-to-five months ago.

A separate group of staff is set to receive Moderna’s vaccine for their fourth dose this week.

Antibodies form only one part of the immune system, and primarily prevent people becoming infected with Covid in the first place. 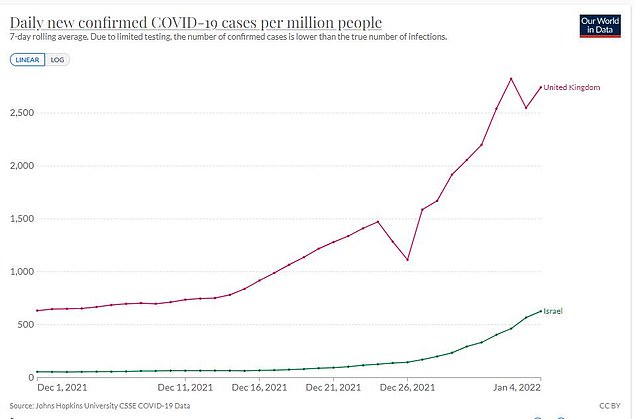 Sir Patrick Vallance says giving out Covid jabs every six months is ‘untenable’ and the vaccination drive will soon ‘settle’ into a yearly inoculation programme — similar to that for flu.

Speaking at a Downing Street press conference yesterday, England’s chief scientific adviser said jabs were being dished out so often because the virus was relatively new and people were still building up immunity.

But once adequate protection emerges, it is likely that several jabs a year will no longer be needed.

Sir Patrick said that every time someone is vaccinated or catches the virus their immunity is broadened, making it better at fighting off current and future variants.

He added that it ‘isn’t tenable’ to keep rolling out Covid vaccines several times a year, and that this was not the ‘long-term plan’.

It comes after Professor Andrew Pollard, who was part of the team that developed the Oxford Covid jab, warned administering booster vaccines to everyone every six months was ‘not sustainable’.

While levels are boosted following a vaccination or infection, they are known to wane over time. But this does not mean someone is completely susceptible to the virus, or becoming severely ill.

Another part of the body’s natural defence, T cells, help fight off the virus once an infection occurs. They last much longer than antibodies but are harder to detect.

One expert who has slammed the idea of rolling out booster jabs every few months is England’s chief scientific Sir Patrick.

At a Downing Street press conference yesterday, he said giving out Covid jabs every six months is ‘untenable’ and that the vaccination drive will soon ‘settle’ into a yearly inoculation programme — similar to that for flu.

He added that Covid jabs were currently being dished out so often because the virus was relatively new and people were still building up immunity.

But once adequate protection emerges, it is likely people will no longer need several jabs a year.

He added that it ‘isn’t tenable’ to keep rolling out Covid vaccines several times a year, and that this was not the ‘long-term plan’.

A recent analysis by the UK Health Security Agency found two doses a Covid vaccine still reduced the chances of being hospitalised with the virus by 72 per cent and a booster further reduced this to 88 per cent.

Israel, like the UK, is currently experiencing a high number of Covid cases following the spread of the highly transmissible Omicron variant.

Daily infections in the country have increased 10-fold over the past month. Incidences of severe illness has also increased but at a far slower pace, according to Health Ministry data.

Around 60 per cent of the Israel’s 9.4million population are fully vaccinated, similar to the UK in terms of proportion vaccinated.