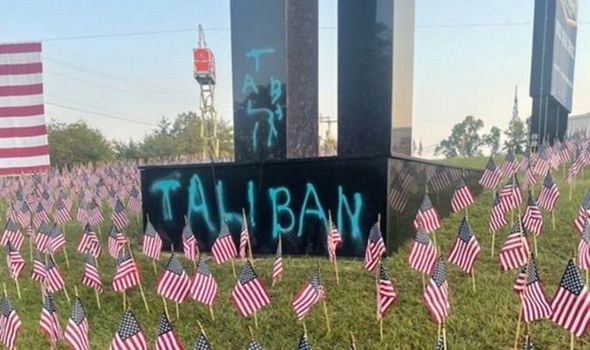 One police officer was almost in tears after discovering the monument in Greenville, South Carolina, had ‘Taliban’ scrawled across the two 13 feet granite slabs shaped like the World Trade Centre’s Twin Towers late Saturday night.

Upstate Granite Solutions, which built the spectacular tribute, shared photographs of the vandalism on Sunday morning and said: “Takes more than a little spray paint to destroy our spirit of patriotism!

“Someone vandalised the Twin Towers Memorial last night. Thankfully the damage was minimal and cleaned off.”

Paul Nichols, the company’s CEO, said he was out of town at the time, but a member of the public informed him of the vandalism.

He said one of his employees called Greenville County Sheriff’s office who came to look at the damage. He says one of the officers “was almost in tears” at the terrible vandalism.

The spray paint was removed after the police filed their report, and Mr Nichols says he is overwhelmed with the outpouring of love and support from the community.

He told ABC: “We spent the time and money on this monument in order to bring our community together and unite over the memory of those who died on the attacks 20-years-ago as well as first responders who willingly laid down their lives to serve others.”

Mr Nichols said work began on the monument about a month ago and was completed last week.

The towers – a pair of 285 stone granite slabs – attracted hundreds of visitors who came to pay their respects, especially at night-time when 1.3-billion lights lit up the Towers and could be seen 25 miles away.

Mr Nichols says he originally planned to leave the monument up for a week but is now considering keeping it up for a year.