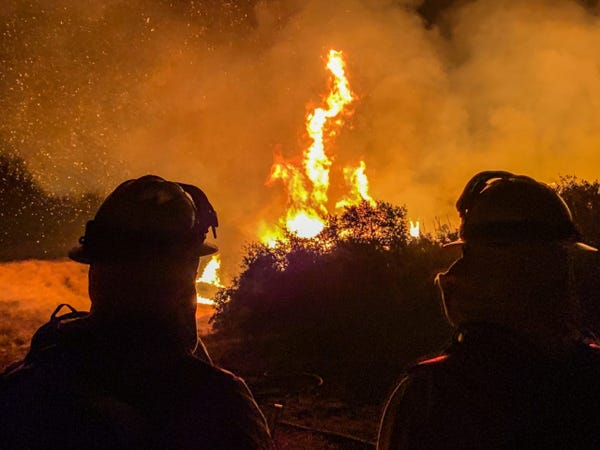 A California firefighter died while battling a wildfire sparked earlier this month by a gender reveal party.

The firefighter went missing in the San Bernardino National Forest on Thursday while fighting the El Dorado Fire, which has so far caused more than 22,000 acres of land to burn, according to a tracker from Cal Fire.

The person was later found dead by a rescue crew. The cause of death still under investigation, according to the San Bernardino National Forest Service.

The firefighter's identity has been withheld until the next of kin has been notified.

California's El Dorado Fire erupted on September 5 near Yucaipa after a group of people used a "smoke generating pyrotechnic device" at their gender reveal party, the California Department of Forestry and Fire Protection said at the time.

Investigators are now saying that those involved in the party could face charges for the firefighter's death, according to the local television station ABC7 KABC-TV.

The wildfire, which has been 59% contained, has caused thousands of people to evacuate from the area.

It is one of many major fires currently raging through California. To date, more than 3.4 million acres of land have been torched by the blazes. Twenty-six people have died in California and more than 6,5000 properties have been damaged or destroyed.

The woman who popularized the gender-reveal party has since asked people to stop the practice. In a Facebook post earlier this month, Jenna Karvunidis wrote that it was time to "stop having these stupid parties."

"For the love of God, stop burning things down to tell everyone about your kid's penis. No one cares but you," she said.