EXCLUSIVE: A majority of Brits oppose unions’ demands for double-digit pay hikes – as only a quarter of workers say they are getting similar pay rises to match inflation this year

Fewer than half of voters support efforts by unions to get inflation-busting pay rises for their members – because most of them are expecting to see their pay go down this year.

A poll for Mailonline today reveals that while a majority (53 per cent) support unions’ right to take strike action over pay in broad terms, that support falls away if their pay demand is too high.

Just 45 per cent of those polled backed strike action by unions demanding pay increases equal to or in excess of the CPI inflation rate, currently 10.7 per cent.

The survey of 1,500 people by Redfield and Wilton Strategies found that two thirds (66 per cent) of voters have either received or expect to receive a pay rise lower than the rate of inflation – a real-terms cut in their wages.

Little more than a quarter (27 per cent) expect to receive real-terms pay increases in the current financial year. 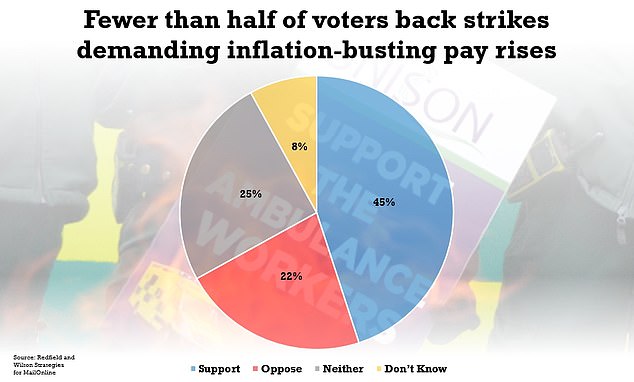 Just 45 per cent of those polled backed strike action by unions demanding pay increases equal to or in excess of the CPI inflation rate, currently 10.7 per cent. 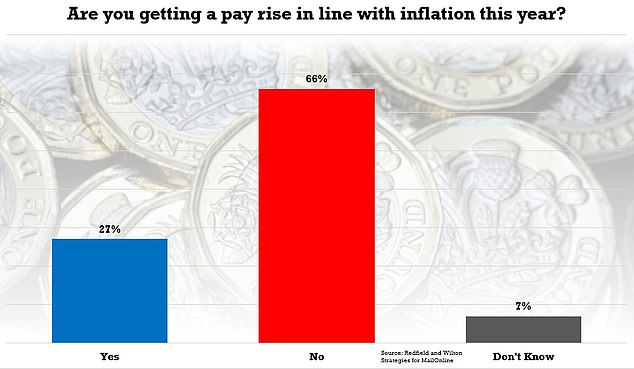 Little more than a quarter (27 per cent) of voters expect to receive real-terms pay increases in the current financial year.

Nurses are striking in pursuit of a 19 per cent pay increase, while junior doctors are considering action over a demand for a 26 per cent rise. Rail workers are not asking for as much but ministers have said that any pay rises close to the rate of inflation are currently unaffordable.

The poll results showed greater support for the action in more affluent parts of the country than in some of the UK’s more industrial areas.

A majority of people in London, the South East, the North West and Wales backed striking for inflationary pay awards, but support was in the minority in areas including the North East, Yorkshire and the Midlands.

Support for the strikes correlates broadly with age and likelihood of workers getting large pay rises themselves.

Support is highest among those aged 18-24 and 25-34, who were also the group most likely to see their own pay rise sharply this year.

Both support levels and pay expectations were broadly the same for men and women.

Ambulance workers and hospital doctors were last night threatening more strikes, despite fresh talks between unions and ministers on pay.

Union sources said the GMB could, on Monday, announce a further six strikes by ambulance workers in a bid to ramp up pressure on ministers to give ground.

And the British Medical Association said it would be recommending strike action by junior doctors.

Professor Phil Banfield, chairman of the BMA council, said junior doctors needed to act to reverse a 25 per cent fall in real- terms pay over the past 15 years.

Speaking after talks with Health Secretary Steve Barclay, he said: ‘If opening the junior doctors’ ballot opened the door to the long-awaited meeting with Government, then we can only imagine what a “yes” vote in that ballot will do.’

But Mr Barclay is hoping to hold fresh talks with the Royal College of Nursing ahead of two planned strikes next week.

Whitehall sources said ministers were working on options for resolving strikes, which could include a one-off payment to reflect cost of living pressures.

However, talks about what level of payment might be offered, and how it would be funded, remain at an early stage.

No formal proposal has been put to the Treasury and a Government source said there were no plans ‘at this time’ to provide extra cash, meaning ministers would have to secure efficiencies to pay for it.