An American model who says she was raped by a boss at Elite management has repeated her claims in Paris after she and other models were invited there by French police to testify against him.

Carré Sutton, 52, last month filed a law suit in New York City accusing Gerald Marie, former head of Elite Model Management’s European division, of having ‘repeatedly raped her’ at his apartment when she was 17 years old.

And on Tuesday, she spoke out against her alleged attacker in France at a press conference timed to coincide with fashion month and raise awareness – despite there being no possibility of charges, with the statute of limitations having long expired.

Sutton – who in the 90s was the face of Guess, Calvin Klein, and other defining brands of the era – claimed Marie would ply her with vials of cocaine ‘on the premise that it would allow her to lose weight to become a more successful model.’

Sutton said that, when she came on to Marie’s radar, ‘she was completely trapped.’

She told a press conference in the French capital during her visit to speak to police that she depended on Marie for food, housing and bookings.

‘I knew I had to endure the abuse in order to continue working. That was made very clear to me,’ she said. 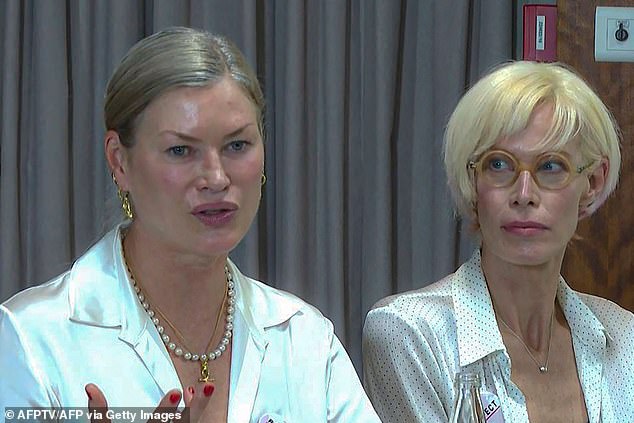 Carré Sutton, 52, is pictured in Paris on Tuesday with Lesa Amoore. Both women have accused former Elite model manager Gerald Marie of sexual abuse – two of at least 11 women to accuse him 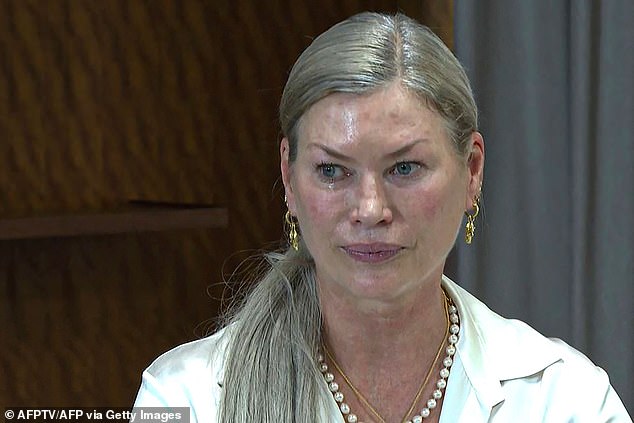 Sutton, who was the face of Guess and Calvin Klein in the 1990s, said that she finally got free from Marie in 1986 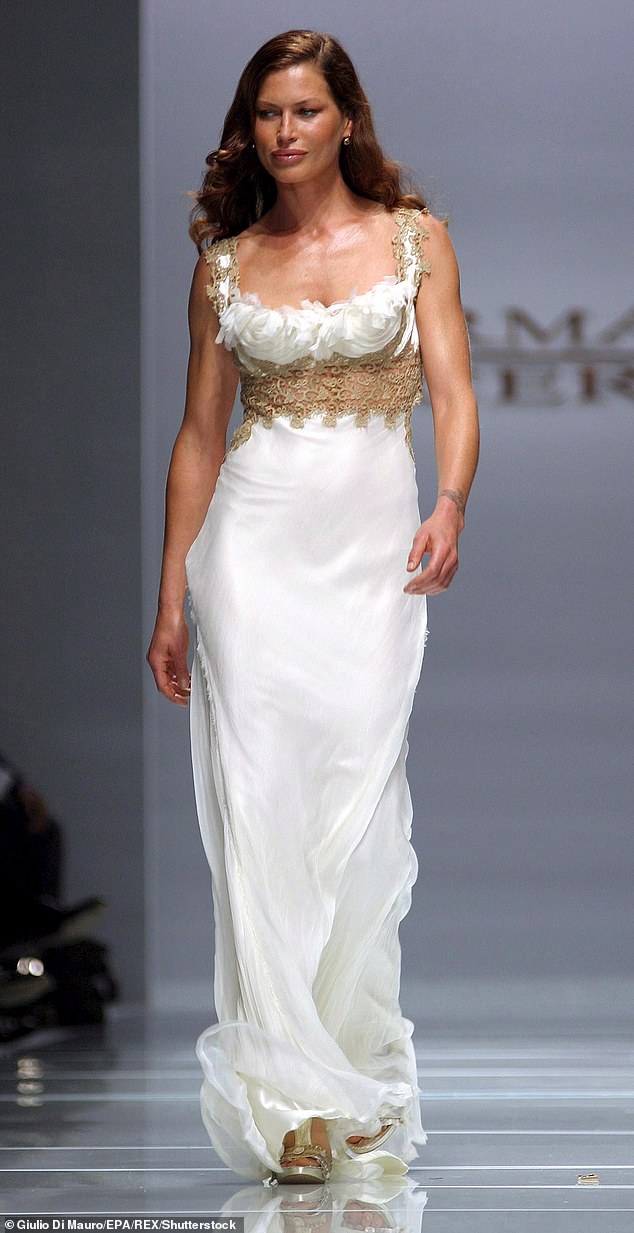 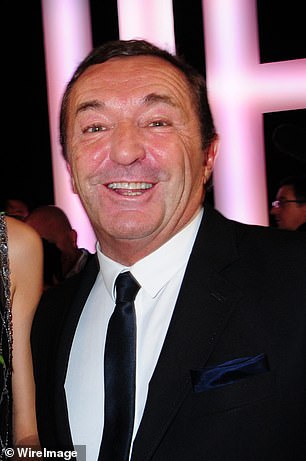 Marie, now 71, allegedly ‘trafficked’ Sutton – and other women – ‘to other wealthy men around Europe. He was known as the ‘Harvey Weinstein of the fashion industry’ across young models in the 80s and 90s

Sutton, who was married to Oscar-nominated actor Mickey Rourke from 1992-98, and is now married to environmental scientist Matthew Sutton, said it took years to process the alleged abuse, let alone discuss it.

Marie, now 71, is accused in Sutton’s suit of having ‘trafficked’ her ‘to other wealthy men around Europe’.

Dubbed ‘the Harvey Weinstein of the fashion industry’ for preying on young models in the 80s and 90s, Marie, who now lives in Ibiza, has been accused of abuse by at least 11 women.

Sutton told how she was trafficked from San Francisco to New York and then to Marie while still a child.

She said it was ‘by design and there I endured [alleged] abuse,’ adding that others have had similar experiences.

The Californian model said that she was so young she did not know how to handle the abuse.

‘As a child, it’s really what you do to survive and try to normalize or compartmentalize is classic trauma response,’ she said.

‘I move throughout my career really trying to put something to the side that was horrific and traumatic to me.’

She said she was speaking out to encourage others to follow suit, and change the culture of silence.

‘Abuse is normalized in our industry and in the modeling industry because of the perceived privilege of being paid for winning a genetic lottery,’ she said, according to Women’s Wear Daily.

‘Many see that as the price of fame and even as fair trade.

‘The industry that enabled my abuse and let men pay for access to women is still the same industry today.’

She and several others who accused him publicly – Jill Dodd, Lesa Amoore, Shawna Lee, Ebba Karlsson and Emily Mott – were invited by police in Paris to testify against him, in a bid to raise awareness of the issue rather than secure a conviction. All of their allegations have exceeded the statute of limitations.

Amoore, 52, said she met Marie before her 18th birthday and he allegedly sexually assaulted her over a three-year period, while Marie was dating supermodel Linda Evangelista.

She said: ‘Survivors of sexual abuse deserve to file a claim against their abusers, and we need a legal system to reflect the science of trauma.’ 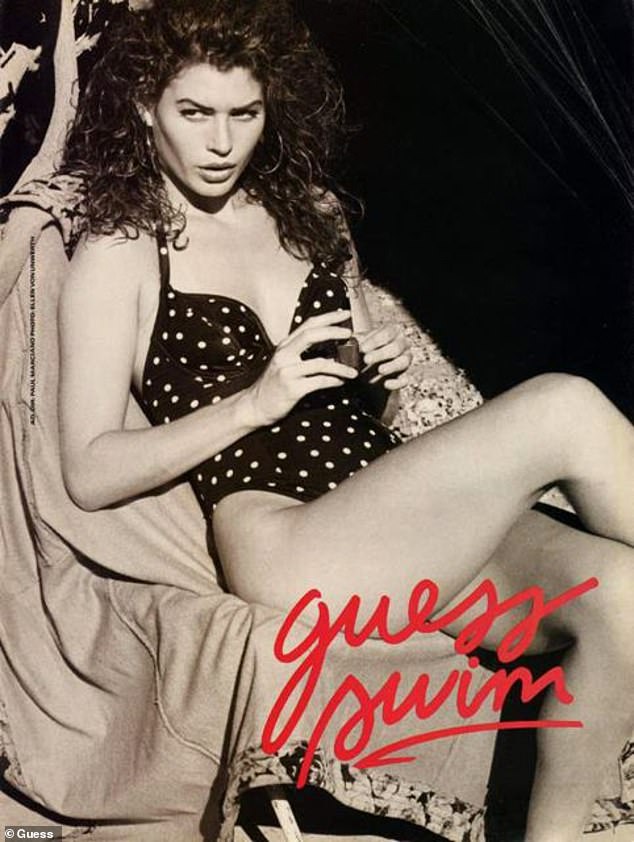 One year before arriving in Paris Sutton was a 16-year-old living on her own in California’s Bay Area when she was ‘discovered by a modeling agent with connections to Elite in New York City,’ she told The Guardian

Sutton said that her message to those ‘who may be suffering, that you’re not alone and we are here for you.’

She added: Unfortunately, because of France’s complicated and backwards laws of sexual abuse, I cannot bring a legal claim against Marie here. It is time to hold this man accountable for his crimes.’

Model Alliance founder Sara Ziff, who was at the Paris press conference, said her organization has run a 24-hour support line for 10 years, and has helped industry survivors come forward.

But she said it was far from an isolated case.

‘We hear every single day from current working and aspiring models about similar alleged abuses that are happening,’ she said.

Sutton said that she plucked up the courage in 1986 to demand the abuse stop.

As a result, she was ‘kicked out to go to another apartment and then work stopped.’

She said she was dismayed that, having first told her story 11 years ago, there has ‘been no accountability, so I really don’t expect much.’

She added: ‘For me, justice isn’t about seeing somebody behind bars.

‘There are many Gerald Maries within this industry. It’s about seeing change within an industry that’s still largely unregulated. 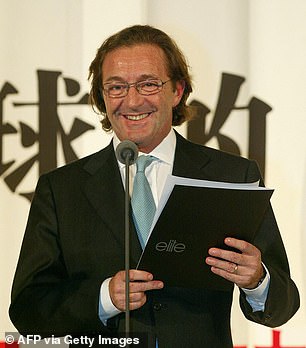 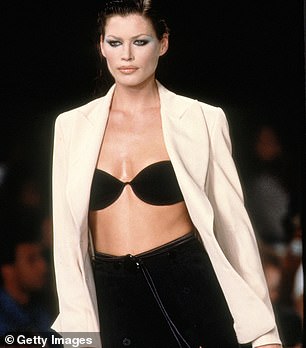 Marie is now accused by at least 11 woman, including Sutton – pictured during New York Fashion Week in 1991 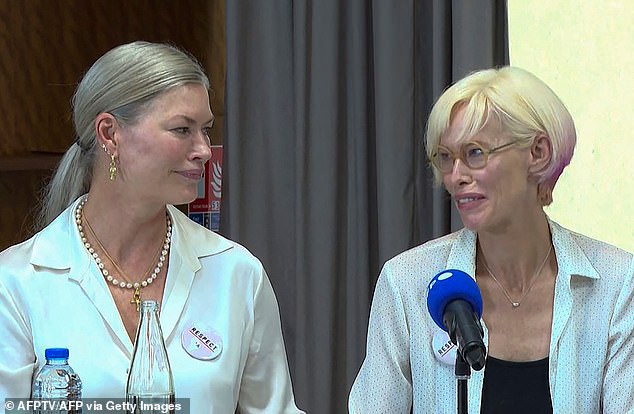 Sutton and Amoore are seen during Tuesday’s press conference, timed to coincide with the beginning of fashion month 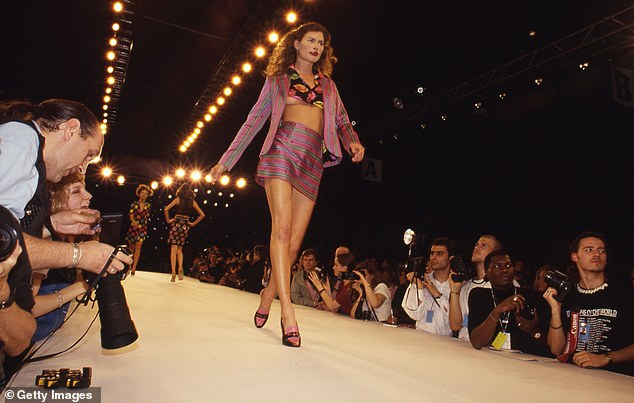 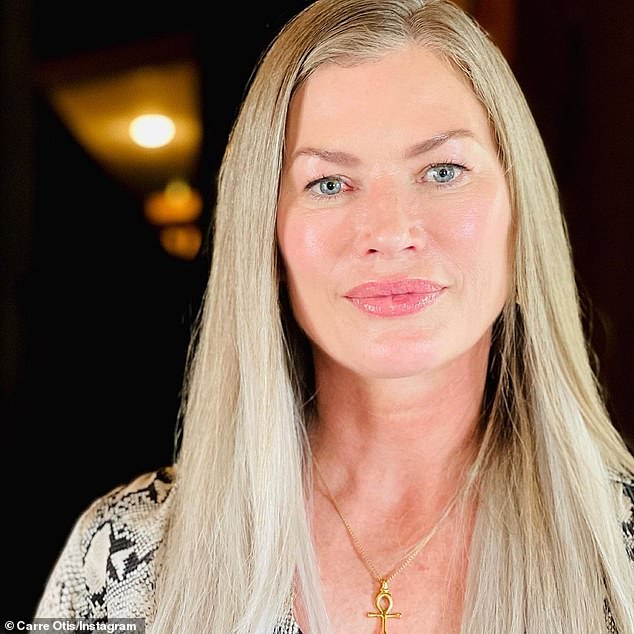 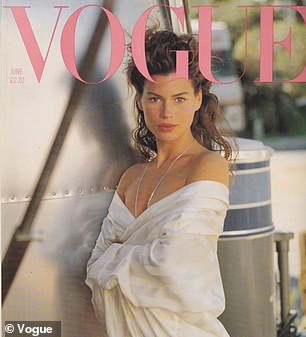 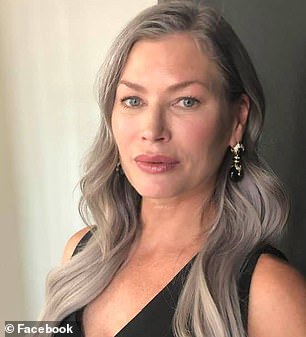 Then and now: Carré Sutton, now 52, has been modeling since she was 16 and has appeared in Sports Illustrated, Vogue, Harper’s Bazaar and Cosmopolitan. She filed a lawsuit in Manhattan federal court alleging former Elite Model Management head Gerald Marie ‘repeatedly raped’ her in Paris when she was 17 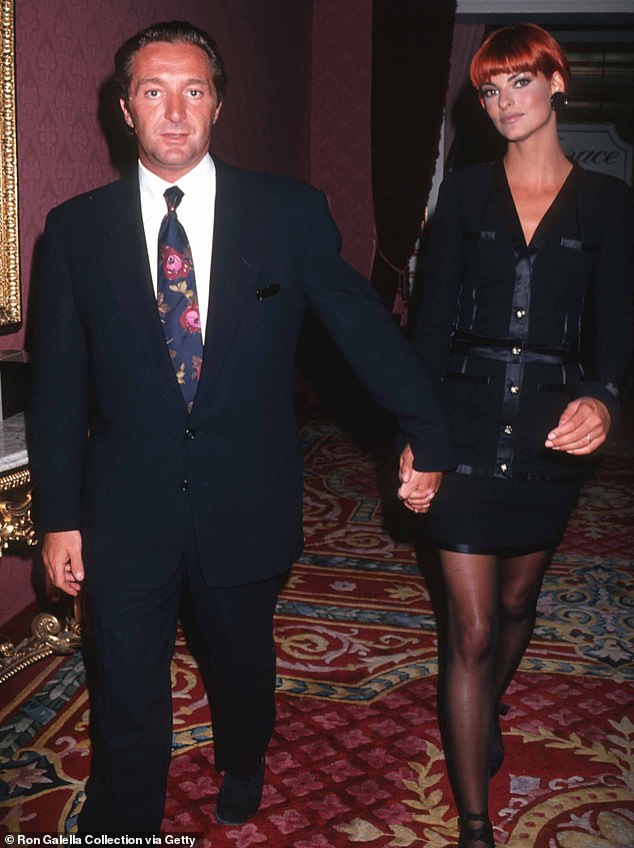 Marie at the time was in a relationship with Canadian supermodel Linda Evangelista.

Evangelista, now 56, has said she is horrified by the allegations.

‘During my relationship with Gerald Marie, I knew nothing of these sexual allegations against him, so I was unable to help these women,’ she told The Guardian last year.

‘Hearing them now, and based on my own experiences, I believe that they are telling the truth. It breaks my heart because these are wounds that may never heal, and I admire their courage and strength for speaking up today.’

Celine Bekerman, Marie’s lawyer, told DailyMail.com that he ‘refutes with dismay these false and defamatory allegations,’ but would be ‘withholding his eventual statements until speaking to the competent authorities.’

After six months of abuse Sutton claimed she refused to have sex with Marie. In turn he kicked her out of his Paris apartment and Sutton was transferred to a modeling agency in Milan, Italy

Christensen said she stood with these ‘brave women all the way.’

Porizkova said that young models were taught to view ‘sexual harassment as a compliment.’

‘As models, we weren’t paid for our talents,’ Porizkova said. ‘We were renting our body and face. Your body wasn’t your own.’

She applauded the women who had traveled to Paris and who would, she said, ‘relive some painful memories to stand up for a better industry and the women who haven’t been able to come forward.’

Jovovich said: ‘I never experienced abuse to the extent many others did when I was starting out. But I did experience a Wild West industry culture where kids were treated like adults and anything goes.

‘You are young and vulnerable and potentially set up for a lifetime of abuse or bad patterns that will shape your sense of self-worth for the rest of your life.’

Carla Bruni, one of the most famous models of the ’90s and the former first lady of France, added: ‘Enough is enough — I stand with Carré and the other survivors of Gerald Marie as they come to Paris to testify against their abuser.’ 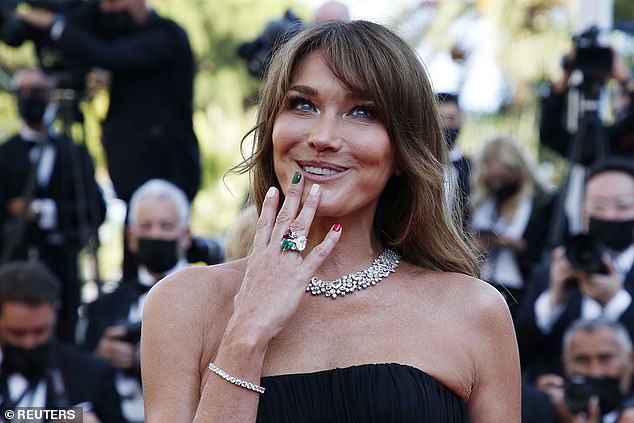 Carla Bruni, the former first lady of France – pictured at the Cannes festival in June – said she supported Sutton’s actions 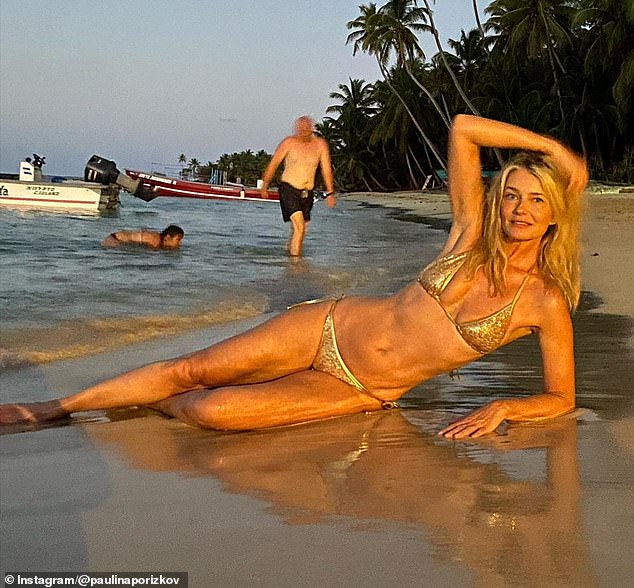 Paulina Porizkova, 56, praised Sutton for speaking out about abuse in the industry