ACT Chief Minister Andrew Barr is preparing to order a formal inquiry into the trial of Bruce Lehrmann, after an extraordinary war of words erupted between the territory’s director of public prosecutions and police.

Barr said ACT Attorney-General Shane Rattenbury and the Director-General of the Justice and Community Safety Directorate briefed cabinet on Monday afternoon “regarding the issues raised by the actions of authorities involved in the Lehrmann trial”. 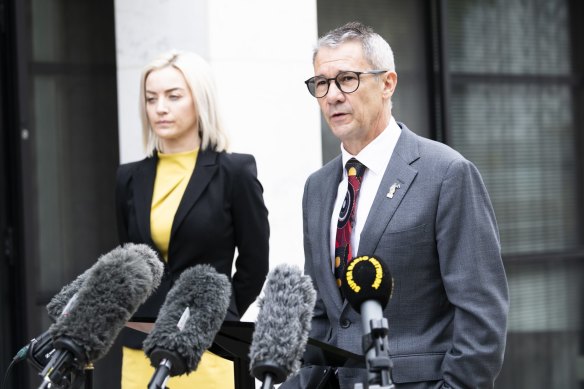 ACT DPP Shane Drumgold reportedly called in the letter for a public inquiry to examine “both political and police conduct” relating to the Lehrmann case.Credit:Rhett Wyman

The inquiry discussion comes after the publication last week of a letter from ACT Director of Public Prosecutions Shane Drumgold to ACT chief of police Neil Gaughan in which Drumgold complained of a “very clear campaign to pressure” him not to prosecute Lehrmann, the man who had been accused of raping Brittany Higgins in Parliament House.

The territory government is still receiving advice on how to constitute the inquiry because ACT police are a division of the Australian Federal Police and as a consequence cannot be referred to the local integrity commission, which had been the ACT government’s preferred option.

“The cabinet discussed how a broad-ranging, independent inquiry could help to identify the roles played by the parties involved in the trial and whether these actions were appropriate. These discussions also noted that an [Australian Commission for Law Enforcement Integrity] investigation is currently under way,” Barr said.

“The government will provide further updates in the coming days.”

Lehrmann pleaded not guilty to one charge of sexual intercourse without consent and his trial was aborted in October after juror misconduct. Plans for a second trial were abandoned earlier this month and the charges against Lehrmann dropped because of serious concerns about Higgins’ mental health.

The letter from Drumgold to Gaughan also called for a public inquiry to examine “both political and police conduct” relating to the case, underscoring the dramatic deterioration of relations between the prosecutor’s office and the ACT police.

The ACT police chief and the federal police union hit back at Drumgold’s criticism. Both also backed an inquiry into the Lehrmann case, with the union accusing the ACT’s chief prosecutor of smearing the force by criticising its handling of the investigation.

The ACT Opposition Leader Elizabeth Lee had also called for an inquiry into the handling of the trial.

In an email sent by Gaughan to ACT police last week, the police chief said the force had not been consulted before Drumgold’s letter had been released under freedom of information laws and that “the allegations the DPP has made against individual ACT Policing members are untested”.

Last week, Rattenbury had insisted that police and the Office of the Director of Public Prosecutions had a strong working relationship, despite public divisions over the handling of the Lehrmann case.

The Australian Commission for Law Enforcement Integrity last week confirmed “information has been referred to ACLEI relating to the AFP investigation of and recent criminal proceedings against Mr Lehrmann” and said it would not be appropriate to make further comment.

The ACT government inquiry would be complementary to the ACLEI inquiry.