The outbreak is reaching its worst ever stage in the country, fanned by a patchy vaccine rollout, an infectious new variant and a lack of nationwide public health restrictions. 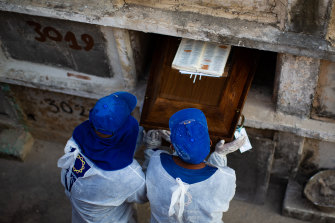 “The outlook for the coming weeks will be very difficult,” former health minister Nelson Teich, who left the ministry after clashing with the President, told Reuters. “Our vaccination program is slow.”

On Wednesday, the Health Ministry reported 2009 daily COVID-19 deaths under a new counting system, bringing its pandemic total to 300,685. The milestone comes a day after the country reported a record daily death toll of 3251 fatalities and Bolsonaro gave a televised address in which he defended his handling of the pandemic – and was jeered by pot-banging protests across the country.

Bolsonaro has won international notoriety for his efforts to block lockdown measures, sow doubts over vaccines and push unproven cures like hydroxychloroquine, insisting the economy must be kept humming to prevent worse hardship. This week he said his critics were behaving as “if only Brazil was experiencing COVID deaths”. 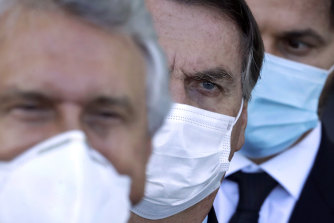 Brazilian President Jair Bolsonaro, centre, arrives for a press conference following a ministerial meeting about his government’s handling of the pandemic.Credit:AP

The worsening health crisis and the return of his political nemesis, former leftist president Luiz Inacio Lula da Silva, whose corruption convictions have recently been annulled, allowing him to run in next year’s election, appear to have forced Bolsonaro to start taking the pandemic more seriously.

On Wednesday (Thursday AEDT), he said the government would seek more coordination with state governors, with weekly meetings to discuss coronavirus-fighting measures in a newly launched committee.

Separately, Sao Paulo state Health Secretary Jean Gorinchteyn accused the Health Ministry of “bureaucratising” the process of registering COVID-19 deaths by requiring identity documents that served to under count the dead. He said the requirement was not communicated to states and municipalities in advance.

Newly appointed Health Minister Marcelo Queiroga, the fourth since the start of the pandemic, said in a press conference that he was going to check whether the numbers had been artificially reduced. Soon after the ministry rescinded the changes.

Last year, the ministry came under fire for stopping the publication of COVID-19 data on its website, before the decision was ordered overturned by the supreme court.

Teich said he thought the situation in Brazil could still “get much worse” if the transmission of the disease was not controlled nationally by measures such as testing, case screening, isolation of infected people, quarantines and payment of financial aid for people to be able to stay at home.

“The disease is now dictating its own evolution, because we are not able to control it,” he said. “It is a difficult situation.”