An aide to fugitive Nissan chief Carlos Ghosn pleaded not guilty to hiding tens of millions of dollars for his boss today as the trial against him began in Tokyo.

Greg Kelly denies an $87million conspiracy charge in a saga which has gripped the business world since Ghosn’s arrest nearly two years ago.

Ghosn is at large after his spectacular escape from Japan last year – hiding in an instrument case to flee to Lebanon – leaving Kelly as the only person facing trial.

The trial, expected to last ten months, turns on whether Kelly concealed payments of 9.2billion yen ($87million) which were promised to Ghosn on his retirement. 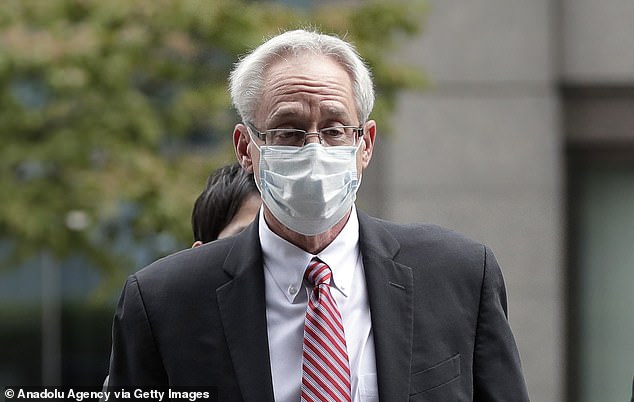 Greg Kelly (pictured), an aide to ousted Nissan boss Carlos Ghosn, arrives at the Tokyo District Court for the first day of his trial today

Nissan itself is on trial over the same charges, and the company has pleaded guilty and is paying a 2.4billion yen ($23million) fine.

But Kelly entered a not guilty plea on Tuesday, saying: ‘I deny the allegations. I was not involved in a criminal conspiracy.’

Kelly, who faces up to 10 years in prison if convicted, says no final agreement was made on any post-retirement pay and therefore no disclosure was legally required.

The 64-year-old wore a mask as he entered the Tokyo court dressed in a dark suit and red striped tie today.

Inside the courtroom, he described Ghosn as an ‘extraordinary executive’ who brought Nissan back from the brink of bankruptcy and was considered a ‘retention risk’ because rules introduced in Japan from 2010 limited executive pay.

He said various options for additional pay to Ghosn were considered, and he ‘took it for granted’ that any compensation would be ‘lawful’.

‘The evidence will show I did not break the law,’ Kelly added.

Nissan and Japanese prosecutors disagree, arguing they have evidence that future payments were pledged to Ghosn and should have been disclosed in filings.

Ghosn too has vigorously defended himself, maintaining his innocence since he was first arrested and sacked as Nissan boss in November 2018.

After being released on $9million bail in March 2019, he was re-arrested in a dawn raid a month later and hit with fresh charges.

In September last year, US securities regulators accused Ghosn and Nissan of hiding more than $140million in expected retirement income from investors.

Ghosn was bailed a second time and banned from leaving Japan, but gave authorities the slip by hiding in an instrument case and flying to Lebanon just before New Year’s Eve.

A week after his sensational escape, he gave a press conference claiming Nissan colluded with prosecutors to have him arrested because he wanted to deepen the Japanese firm’s alliance with Renault.

Ghosn said he fled because he did not believe he would get a fair trial in Japan, which does not have an extradition treaty with Lebanon. 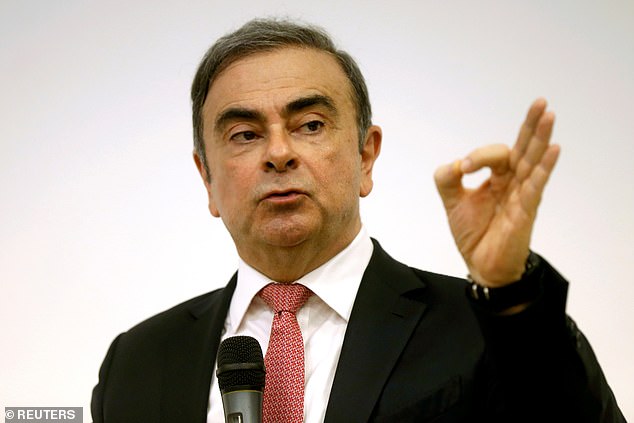 Prosecutors have amassed a vast trove of documents, only a small portion of which have been given to the defence so far, according to Kelly’s lawyers.

His defence team say they had ‘no choice’ but to proceed with the trial because Kelly – who has been out on bail in Tokyo since December 2018 – is separated from most of his family while he waits for his case to go to court.

His wife Dee has stayed in Tokyo with him and told reporters it was ‘disappointing’ that Ghosn would not be testifying.

‘But he is not here and he made the choice and he had to make that choice,’ she said.

‘He is going to have to deal with the consequences of the choice he made.’

Kelly’s legal team say they are confident he can be acquitted – despite the track record of Japan’s prosecutors, who win over 99 per cent of the criminal cases they bring to court.

But they argue they have been put at a strong disadvantage by the court’s refusal to allow overseas witnesses to testify by videoconference.

Nissan has been tight-lipped about the trial, with a source close to the firm’s leadership saying there was concern about negative media attention.

The witness list includes a number of top former or current Nissan executives, including Kelly’s former colleague Hari Nada, who obtained whistleblower status from prosecutors in exchange for his cooperation.

Former CEO Hiroto Saikawa, who was forced out over financial improprieties discovered by an internal investigation in the wake of the Ghosn scandal, will also give testimony.