Passengers on the Melbourne Airport Rail Link could expect to pay a similar fare to those offered by SkyBus and other airport rail services in Australia.

Sample fare structures modelled as part of economic analysis for the long-awaited service, which is set to cost up to $13 billion, take into account the price of a comparable city-airport SkyBus ticket. 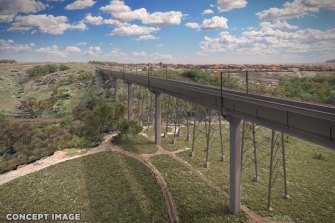 An image of part of the Melbourne Airport Rail project, released by the state government earlier this year. Credit:Rail Projects Victoria

While ultimate ticket prices will be up to a future government, fares on the airport rail link are also expected to be comparable to other airport services across Australia, according to the Andrews government.

The Sydney Airport rail line sets adults back $18.79 to travel in from the city during peak periods, and children $15.37. In off-peak periods, the cost for an adult drops by about $1, with the “gate pass” component of the ticket making up $15.13.

The Herald Sun, citing a business case, reported Victorians would face an $18 surcharge to travel on the Melbourne Airport Rail Link. If added to the two-hour myki fare, the maximum cost for people to get to the airport would be $22.50.

Authorities are also considering special fares for groups or airport workers travelling on the Melbourne line.

Transport Infrastructure Minister Jacinta Allan said while ticket prices were yet to be finalised, “it is important that we provide a frequent, affordable and accessible airport rail service for all Victorians and visitors to the state.

“Melbourne Airport Rail will change the way passengers move to and from the airport forever, with direct trips of around 30 minutes to the heart of the CBD and easy connections to key services and our growing regions – and with SRL [Suburban Rail Loop] North delivered, passengers will have another direct rail service to the airport,” Ms Allan said.

Monash University public transport expert Professor Graham Currie said that if the surcharge for the Melbourne Airport Rail Link came to $18, that would be “quite reasonable”.

Professor Currie said even with an $18 surcharge, the line would still be substantially cheaper than a taxi fare or parking.

SkyBus would still be competitive given it could sometimes run services to the airport in fewer than 30 minutes, he said.

On the other hand, if you’re travelling in a group, then it adds up pretty quickly. And that may have people discouraged from using the service,” he said. “So I think they really need to be really careful to make sure it’s competitive with other modes to get people on board.”

Along with the Andrews government, the Morrison government has committed $5 billion to the Melbourne Airport Rail Link.