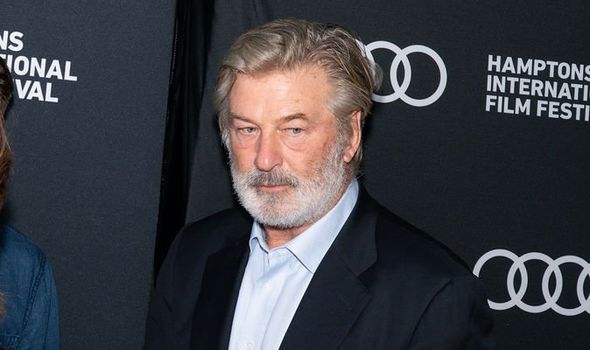 Alec, 68, was filming a scene for Western movie Rust at a ranch near Santa Fe in New Mexico when he killed 42-year-old Halyna Hutchins and left writer-director Joel Souza, 48, badly injured.

The prop gun that he was using was loaded with a single live round instead of a blank, a Hollywood union said in a memo to members.

The International Alliance of Theatrical Stage Employees said: “A single live round was accidentally fired on set by the principal actor.” Alec, who was later pictured weeping and doubled over in grief, has been quizzed by detectives.

He said: “There are no words to convey my shock and sadness regarding the tragic accident that took the life of Halyna Hutchins, a wife, mother and deeply admired colleague of ours.

“I’m fully cooperating with the police investigation to address how this tragedy occurred. I am in touch with her husband, offering my support to him and his family.

“My heart is broken for her husband, their son, and all who knew and loved Halyna.”

It is believed the bullet went through Halyna and into the clavicle of Joel. He was rushed by ambulance to Christus St Vincent’s Regional Medical Centre where his condition at one stage was described as critical.

Ukrainian-born Halyna was airlifted via helicopter to the University of New Mexico Hospital in Albuquerque but was later pronounced dead by medics.

It was claimed Baldwin repeatedly asked, “Why was I handed a hot gun?” – meaning with live ammunition.

According to the Hollywood industry website Showbiz 411, an eyewitness claimed Baldwin also said: “In all my years, I’ve never been handed a hot gun.”

The source told the website: “He had no idea how badly they were hurt or that Halyna was dead.”

A few hours later, Alec, who has seven children, was seen bent over, sobbing outside a police station while speaking to someone on his mobile phone.

Juan Ríos, a spokesman for the Santa Fe County Sheriff’s Office, said the shooting at

Bonanza Creek Ranch happened in the middle of a scene that was either being rehearsed or filmed.

He said officers were interviewing people on the set to determine how the two had been shot.

Ríos said Baldwin went to cops willingly and provided a statement to investigators.

He told the Daily Express: “We’re treating this as we would any other investigation,” adding that deputies were still trying to determine whether what happened was an accident. The spokesman said no charges had been filed.

A spokesman for Alec said: “There was an accident on the New Mexico set of Rust involving the misfire of a prop gun with blanks.”

Prop guns include both real guns as well as toy guns or defunct weapons. The former are typically used to add an element of authenticity to close-up shots. These are usually loaded with blanks or blank cartridges, not bullets.

Richard Howell, of prop providers Foxtrot Production Ltd, who has overseen firearm scenes, said: “It is absolutely beyond me. I can’t think how that would actually happen. There should be nothing com- ing out of the blank except some flash, there should be no projectile coming out.

“Armourers (those in charge of the firearms used in a production) should have nothing other than blank rounds.”

It was questioned yesterday if the movie will ever be completed.

Insiders point to the film about musician Gregg Allman’s life, in which a crew member was killed because of negligence.

Lawsuits that followed ended any chance of that movie being finished. Four years ago, Alec questioned how it must feel to accidentally kill someone.

A tweet from 2017, about a southern California cop’s fatal shooting has now resurfaced. He wrote: “I wonder how it must feel to wrongfully kill someone.”

After Hutchins’ death, Alec deleted a picture of himself on Instagram covered in fake blood on the set of Rust.

In a statement, the movie’s production company, Rust Movie Productions, said: “The entire cast and crew has been absolutely devastated by the tragedy, and we send our deepest condolences to Halyna’s family and loved ones.

Counselling “We have halted production on the film for an undetermined period of time and are fully cooperating with the Santa Fe Police Department’s investigation.

We will be providing counselling services to everyone connected to the film as we work to process this awful event.”

Hours before the incident, Emmy-Award winning Alec – from the Baldwin acting dynasty – had posted a photo on Instagram in his film costume, which included what appeared to be a prosthetic wound on his torso.

His previous roles include Jack Donaghy, an oblivious, domineering TV executive on the sitcom 30 Rock, and imitating Donald Trump on Saturday Night Live. According to Hutchins’ website, she was from Ukraine and grew up on a Soviet military base in the Arctic Circle “surrounded by reindeer and nuclear submarines”.

She earned a degree in international journalism from Kyiv National University in Ukraine and, after moving to London, worked as an investigative journalist with British documentary productions throughout Europe.

She subsequently moved to Los Angeles, studying a Masters in fine arts at the AFI Conservatory between 2013 and 2015.

Social media posts suggest she gave birth to her son in early 2013. Her husband is Matthew Hutchins, a Los Angeles-based lawyer who worked as an associate with Kirkland & Ellis until 2017.

Two years ago, Halyna won the cinematography award from the English Riviera Film Festival for her work on the short film Treacle.

This month she posted multiple images from the set of Rust, including a video on Tuesday of her riding a horse on her day off.