Accused drug dealer Mostafa Baluch was granted bail after a magistrate found he was not getting proper access to his lawyer and documents needed to defend himself in jail, according to court

“It is plain from that material that there are many difficulties for him in terms of access to his counsel and access to the prosecution material, and also in the way in which he may be able to prepare his own defence case or cross‑referencing material,” Magistrate Michael Crompton told Central Local Court on October 21. 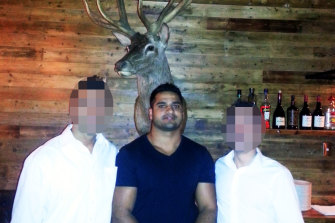 Mostafa Baluch was charged in relation to a major cocaine investigation.

But four days after being released on bail – with a $4 million Newport property as surety – Baluch cut of his electronic monitoring bracelet at Bayview on Sydney’s northern beaches and vanished on October 25.

The prosecution had argued Baluch was a major flight risk because he had access to ‘a vast pool of funds’ and that there was an ‘strong if not overwhelming’ case against him to prove he was a ‘senior’ player in a syndicate which had conspired to import 900 kilograms of cocaine into NSW.

“The loss of the surety offered by the accused would not be a deterrent from absconding to avoid a lengthy period of imprisonment, especially in circumstances where the accused and the syndicate of which he is part has access to significant funds to compensate any loss,” the prosecution said.

The prosecution also told the court the 33-year-old could apply to have the brief of evidence placed on a laptop by his legal team and view it in jail.

Magistrate Crompton acknowledged the charges were serious but found flight risk concerns could be ameliorated by nine strict conditions, including that he live with his parents at Bayview, report to Mona Vale police station daily and wear a monitoring device.

“The real question is how any concerns can be addressed and how the risk can be managed, and in this particular case there are a number of strict conditions which have been proposed which address the bail concerns, including a substantial security and electronic monitoring by a device on his ankle,” he said.

“I am satisfied that the concerns can be sufficiently addressed by the imposition of conditions.”

“The case illustrates a problem with electronic monitoring, on a bail application where there is a serious flight risk of the accused,“ he told a parliamentary hearing.

“Once the device was cut, an alarm was sounded and the police were trying to swoop on his house, but they weren’t there quick enough,” he said.

NSW Police’s Organised Crime Squad is heading up the nationwide manhunt and detectives believe Baluch is still in the country despite trying his best to fly overseas.