A 51-YEAR-old woman said Amazon "ruined her Christmas" after a courier refused to hand over her alcohol as she didn't have ID.

Natasha Bain, of Kent, said her delivery driver did a "challenge 21" and refused to hand over her parcel after she failed to produce a photographic ID. 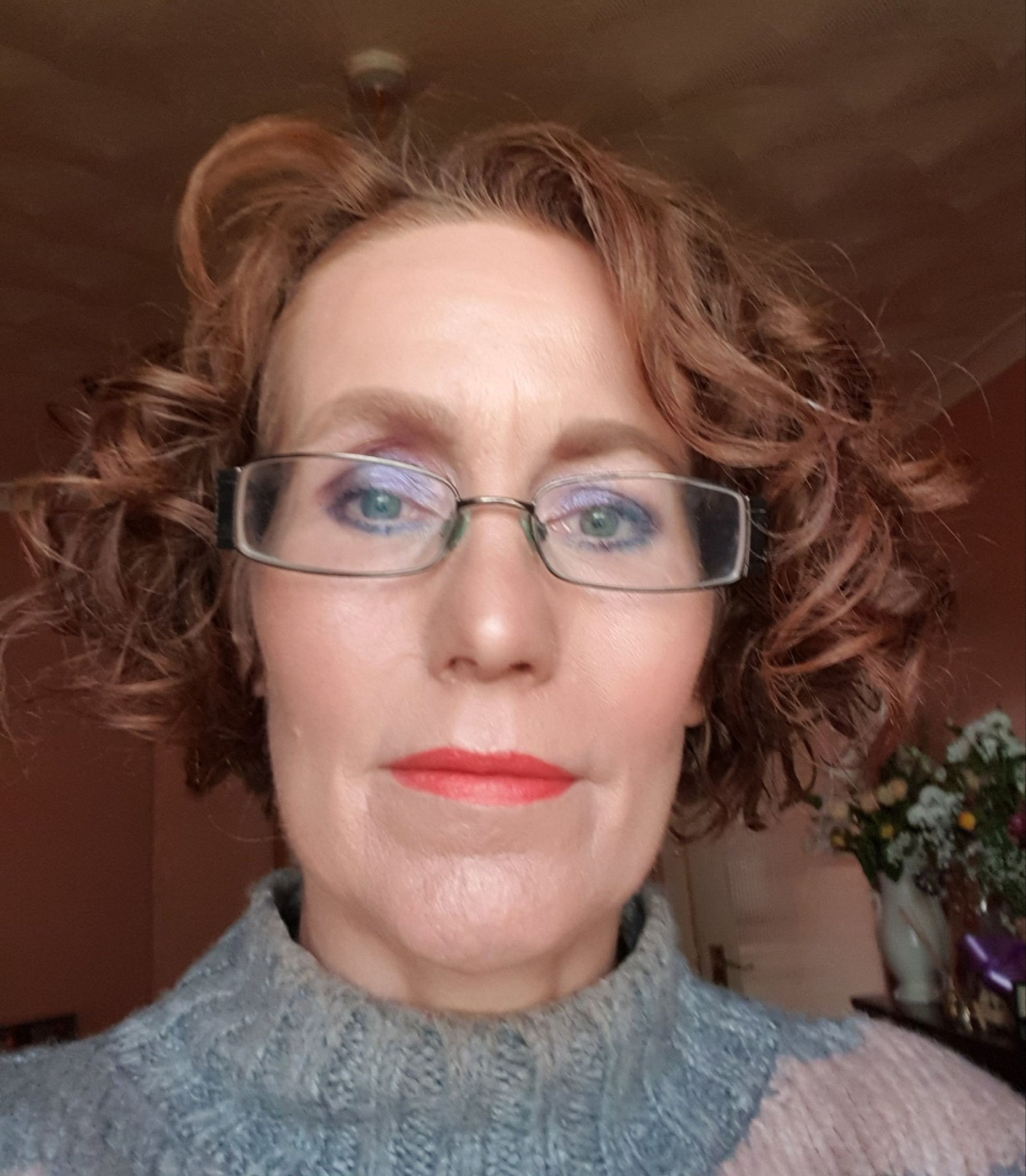 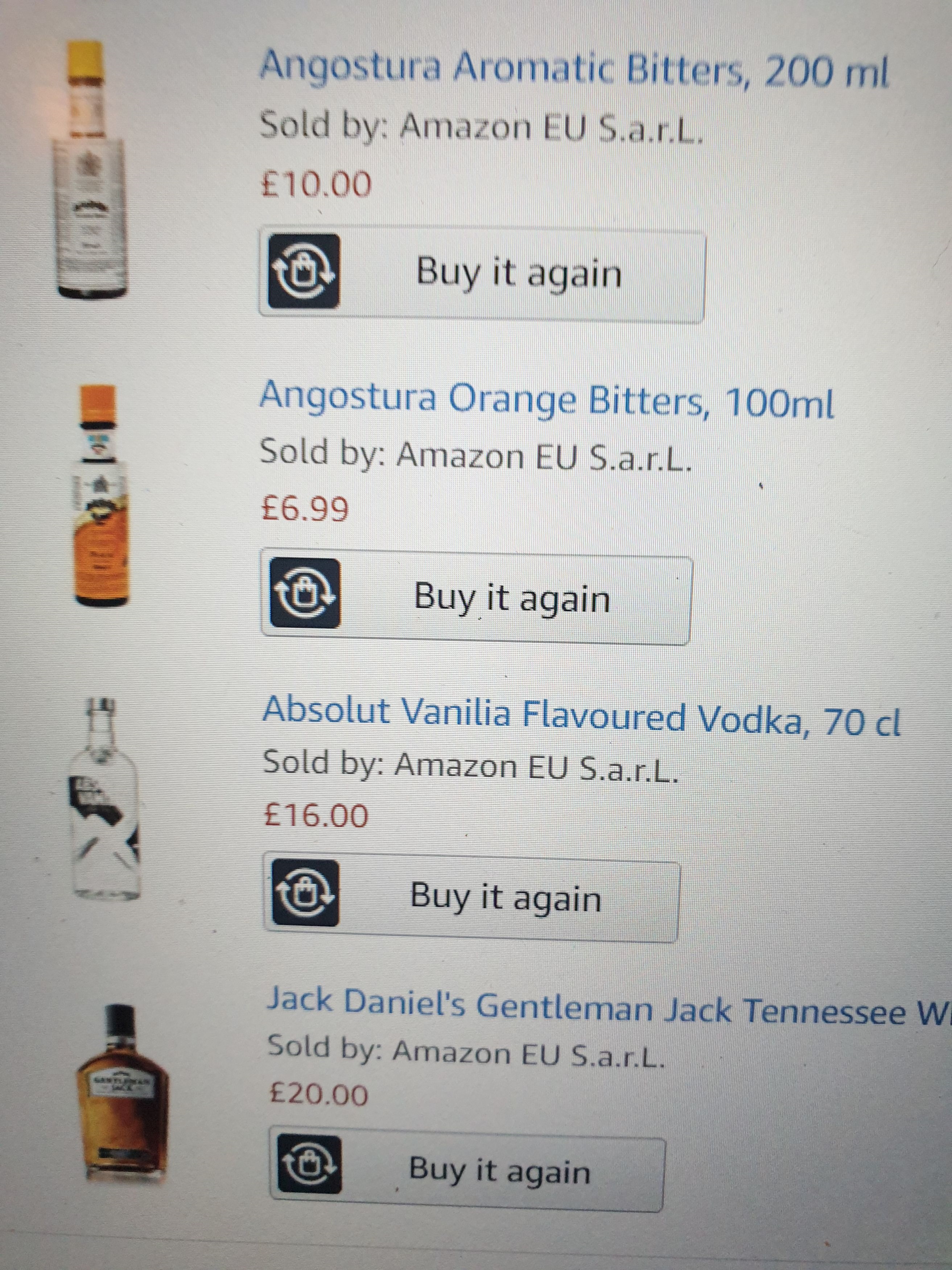 The 51-year-old, who is spending the festive period on her own in tier 4, had decided to treat herself to a bottle of Jack Daniels whiskey and vanilla vodka last week.

But when she answered her door on Monday, she claims the delivery driver asked to see a photographic ID to prove she was 18.

The former administrator, who does not drive due to epilepsy and doesn't own a passport, then explained that she didn't have photo ID, but pleaded with the driver to "use common sense" – pointing out her mature age.

"Livid" Natasha was told she could use her birth certificate but after failing to find it, she faced the night without her festive tipple.

In a bid to circumvent the rules, which she claims fail to allow for "common sense", she was forced to reorder in her neighbour's name and address yet the drinks have still not turned up.

Natasha, from Gillingham, Kent, said: "I was really annoyed. It's left me worrying I won't be able to receive parcels in the future.

"I don't drink very often but I thought I'd treat myself. I thought that'd be nice for over the Christmas and New Year period so I can make myself some cocktails.

"I have had jokes from friends saying that I should take it as a compliment that he didn't believe I was over 21-years-old and I am obviously getting younger-looking as I get older."

Frustrated Natasha then called Amazon's customer service team and claims she was told to use a birth certificate – though later claims she was informed this wouldn't be enough either.

Natasha said: "I got a person from Amazon on the phone who had a word with the driver. They said the birth certificate would be okay.

"I said 'right, I've got to see if I can find my birth certificate' and he said he'd be back at 2pm."

However, Natasha was unable to find her birth certificate and called Amazon again to see if her neighbour who had ID would be able to accept her delivery.

"My neighbours agreed to take in the parcel for me because they had a driving licence," she said.

"It got to 4pm and no one came. When I called Amazon back, they said 'a birth certificate won't do – it has to be photographic'.

"I said I hadn't got a photographic ID and they said 'well what about a driving licence?'.

"I asked to speak to the manager and he was talking over me. He just said 'well what about a driving licence' and I said I haven't got those. I was absolutely livid.

"I explained not everyone had photographic ID and he said 'well they should get it then'."

After sharing her problem online, Natasha claims she has spoken to others with "similar problems".

She has now called on Amazon drivers to use common sense in the future.

Natasha said: "I just think it's absolutely ridiculous that they don't use common sense.

"The funny thing is a couple of weeks ago I got some vanilla gin and that was delivered perfectly okay.

"I think it's really good that they're being very cautious, but there is a limit where you can just use your own brains."

An Amazon spokesperson said: “We take our responsibility in relation to the sale of age-restricted items extremely seriously.

"To confirm the recipient is over 18 years, valid photographic ID with a date of birth is required upon delivery for all age-restricted products. We are working directly with the customer on matters related to their package delivery.” 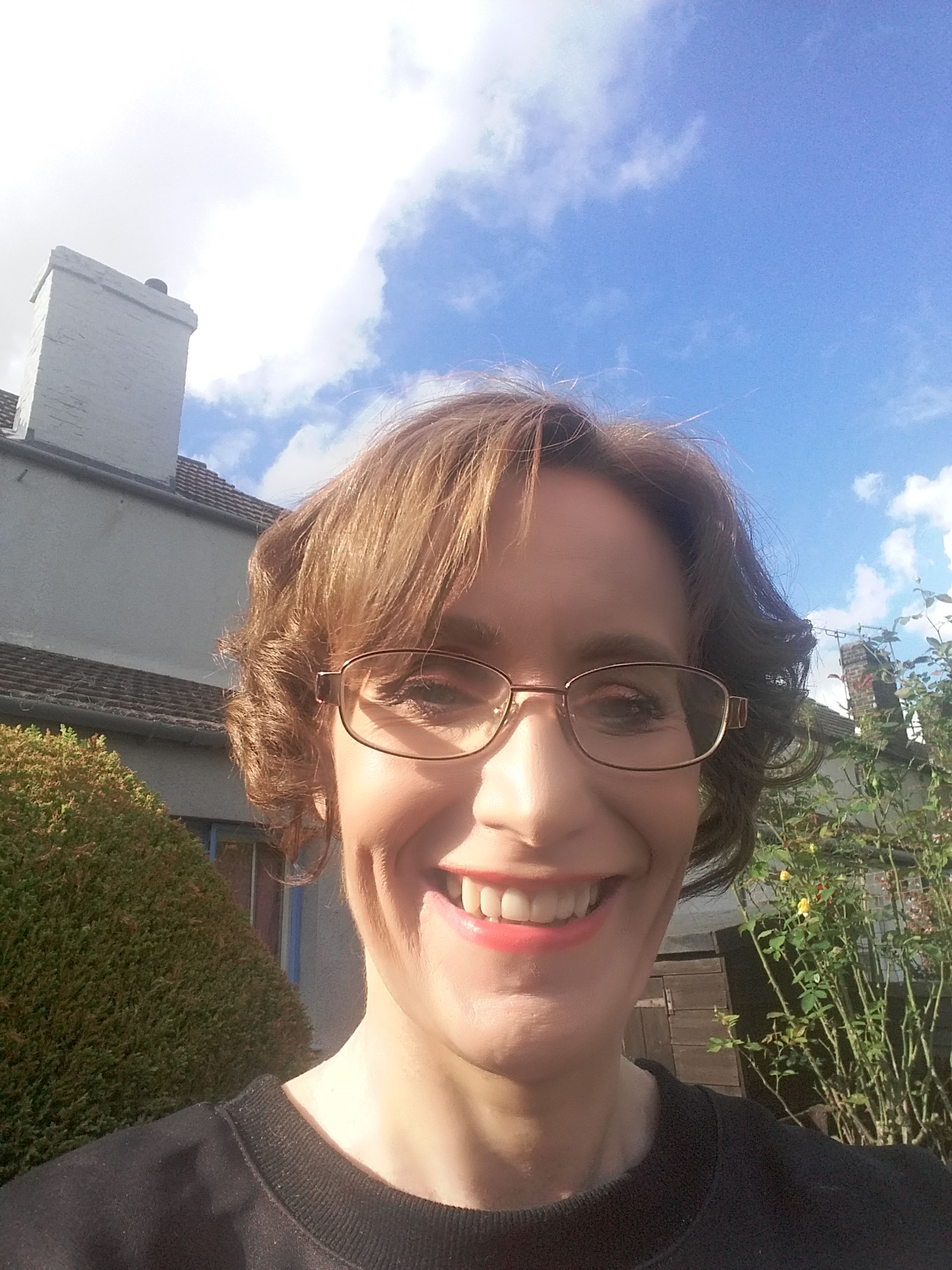 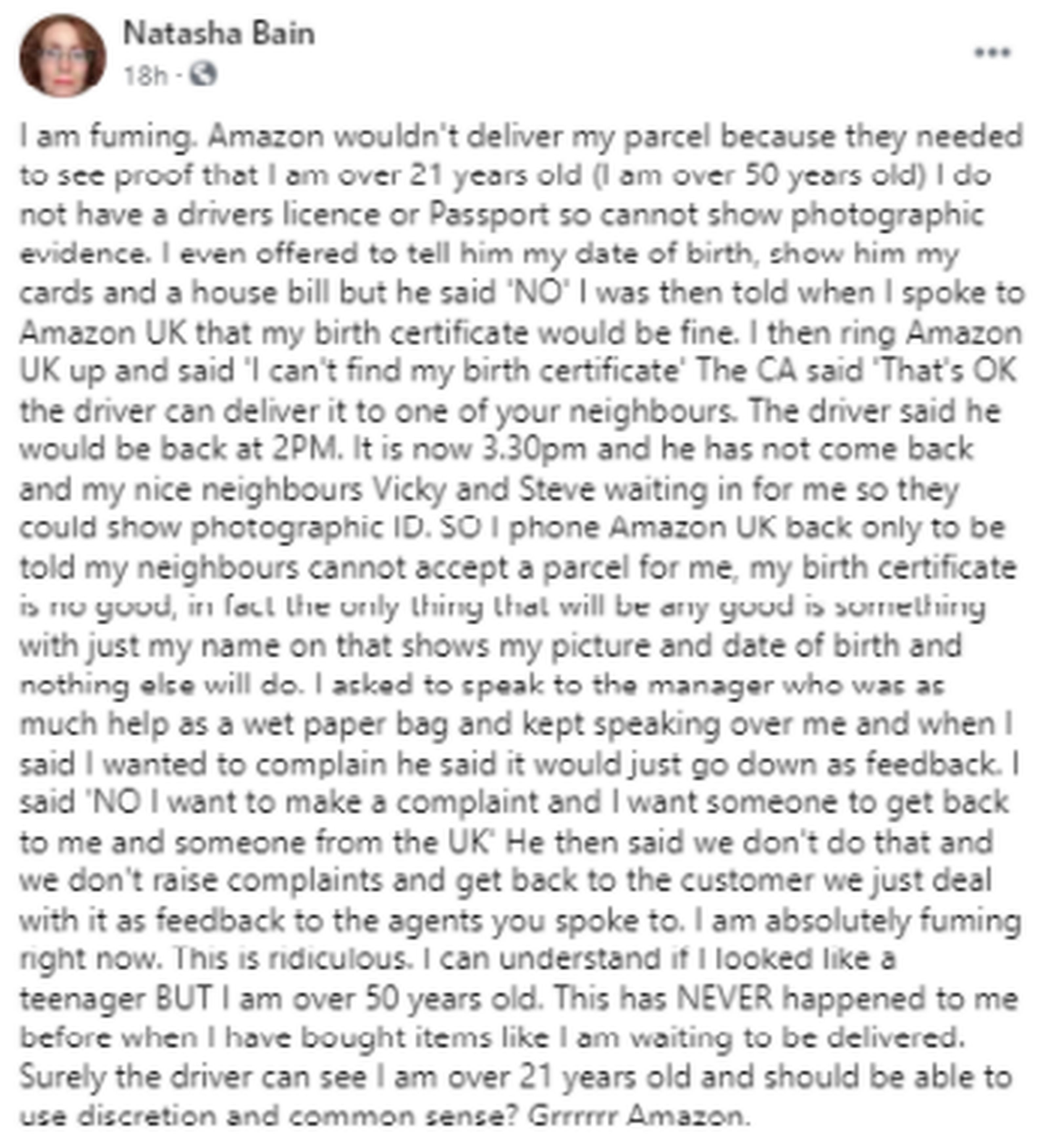 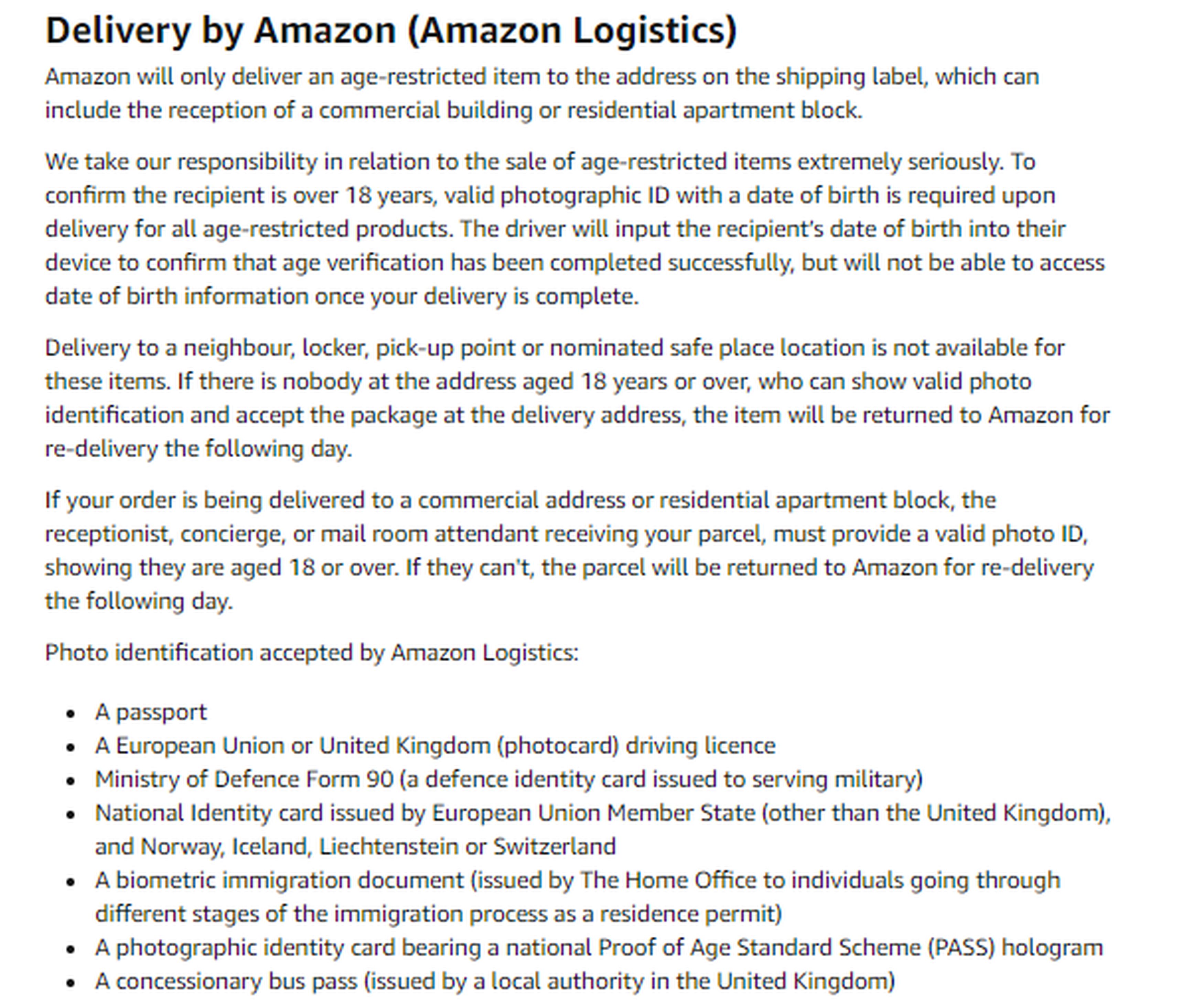